The proprietor of Murray Darling Fisheries, Noel Penfold, spent several years in the industry before branching out on his own, and it took him several more years finding the right property.

“Water quality is everything in aquaculture, especially in a hatchery. Our bore water comes out at 20ºC and has a carbonate hardness buffer of 70ppm. The topography is just right for pond culture: the ground holds water and we’ve got 3-phase power going past the front door,” he said.

The hatchery and nursery facility is spacious, and all air and water plumbing runs either along the walls or overhead, which makes manoeuvring trollies and graders much easier.

The main and most labour-intensive crop is cod (Maccullochella peelii peelii). Thirty to forty spawning pairs are held in each broodstock pond, and in total MDF holds between five and six hundred brood-fish. Their largest fish was 35kg when last weighed, (the heaviest caught in European times weighed 93kg, but there are fossil skulls of fish at least twice that size!)

Spawning drums are put into the ponds in late August and spawning commences during the last week of September. Farm manager Leigh Logan theorises that photoperiod triggers spawning more than temperature.

“The start of spawning doesn’t vary that much, even though water temperatures do. It’s never later than the first week of October, when temperature can be 16ºC.”

The market for juvenile cod is three pronged, which determines the procedure from this point. One market, mainly for export, is for yolk-sac fry. They pack 10,000 in a polystyrene box, and although the fry have to be weaned on arrival, the economics pay off when freight and handling costs are considered.

Local commercial clients usually prefer to buy weaned fingerlings. In this case, the fry are stocked into plankton ponds that have been freshly flooded 10-15 days prior to liberation. As the bore water is 20ºC pond temperature is not a problem, although Noel admits that producing a plankton bloom early in the season, when temperatures fluctuate between night and day, can be problematic.

The ponds are dosed with sufficient agricultural lime and dolomite to bring the carbonate hardness up to 120ppm, scarified and then fertilized with lucerne hay, urea and phosphate. The plankton bloom is managed with 10hp of paddlewheel aeration per hectare when necessary. Evaporated water is replaced, which keeps the hardness buffer at acceptable levels, as well as keeping the ponds fresh and well stirred.

After six weeks the fry measure 25-30mm and are brought into the weaning shed. All fingerlings that come in from the ponds receive a formalin dip to remove any ectoparasites.

They’re fed brine shrimp (Artemia), and weaning onto dry starter crumbles commences on day three. The price of brine shrimp eggs is high; they use six tins a day at $170 each. (Leigh pointed out that their Asian clients pay considerably less for brine shrimp, which is another reason they purchase yolk-sac larvae). Weaning is painstaking — it takes from 10 to 15 days — but they’ve got it down to a fine art and Leigh said they achieve 95% success.

While genetic improvement at this stage has been restricted to the selection of better performing fish for the broodstock ponds, MDF improves its seedstock performance by culling approximately 30% from the bottom of each cohort before they go to their grow-out customers.

“It’s a numbers game, I know,” said Noel, “but if you can identify and eliminate the slow growers as early as possible, they’re numbers that add up down the track in the growout farms.”

MDF is a member of the Hatchery Quality Assurance Scheme. To ensure biodiversity in public water restocking orders the broodstock must come from the catchment area of the intended liberation, and the fingerings have to be held until they’re 45-50mm, however, they don’t need to be weaned.

Noel recently withdrew from the NSW Fisheries dollar-for-dollar restocking program. He evaluated the new compliance requirements imposed by the department, particularly those associated with the occupational health and safety responsibility covering angling club members, and found the insurance costs too high and the risk outside of his control.

The cod broodstock are left alone in their respective ponds. Leigh reasons that the fish have developed their hierarchy and as their feeding regime is a controlled mixture of maintenance pellets and trash fish, the ponds’ biochemistry keeps the water quality stable. Constant observation ensures nothing untoward catches them out, and evaporation replacement keeps a steady water exchange through the ponds.

“Chilodonella [a ciliated protozoan ectoparasite] is the only thing we have had to treat, and… it’s quite a straightforward operation,” he said. “We dose the pond with a mild formalin dilution, apply vigorous aeration and exchange the pond water throughout the treatment. The treated water goes to the settlement pond water where the biodegradable formalin breaks down under aeration and sunlight. Keeping the ponds healthy is the secret. We rarely have to treat the fish.”

The perch spawning season overlaps that of the cod, although the methodology is very different. Egg maturation is temperature-triggered. They’re ready from December to January when pond temperatures are around 24-25ºC. The ponds are lowered and the broodstock netted.

Golden perch (Macquaria ambigua) females showing heavy ovaries and red swollen vents are injected with 500iu/kg of pregnyl, and males with 250iu. After injection, five males and two females are stocked in a gently aerated 1,500-l tank. Ovulation takes 36-48 hours. The fertilized eggs are netted into a clean flow-through tank. Incubation takes around three days and yolk sacks are depleted in another five. Plankton blooms only take 5-7 days to establish at this time of year. After 6-weeks in the ponds the larvae are 25-30mm. Another fortnight sees them coming out of the ponds at 35-40mm and much deeper in the body. The process for silver perch (Bidyanus bidyanus) is pretty much the same, except the hormone dose rate is lower — 200iu/kg — and only the females are injected.

Leigh again: “Initially, a batch of cod can take nearly a month to put through the system; longer if they have to be weaned. The perch are all done and dusted in a week.”

The changes to the native fish hatchery industry over the 25 years during which Noel has been involved have been major. The industry participation rate has declined while the industry itself has grown enormously. Farm dam stockings, once important, have been replaced by sales of seedstock to local commercial growers and producers in East and southeast Asia. The demand for high volumes has seen operations like MDF producing millions of fry and fingerlings, which has helped finance expansion and structural changes, to the point where a hatchery can be run comfortably by two people with some casual help at the height of the season.

The markets for the two lines of fish are also markedly different. Export cod have to be bagged and boxed, the inspection requirements have to be complied with, export paperwork submitted, certificates issued at both ends, and regular farm and catchment health audits carried out. In the case of MDF, the catchment audit is not a problem as no water comes onto the farm, and none leaves it. Noel attributes the reports of the quality of his seedstock from buyers to the healthy start they get at the hatchery. Weaned fish sold locally can be transported in bulk in aerated tanks but they still have to be weaned, graded and delivered.

Golden perch, also known as callop and yellow belly, are a prized eating and angling fish. Their market is for the private- and public recreational trade. Silver perch sales are mainly to government stocking programs and a small growout industry based on the live fish markets in the east coast capital cities. They’re delivered in tankers directly from the ponds for both public and commercial stocking. 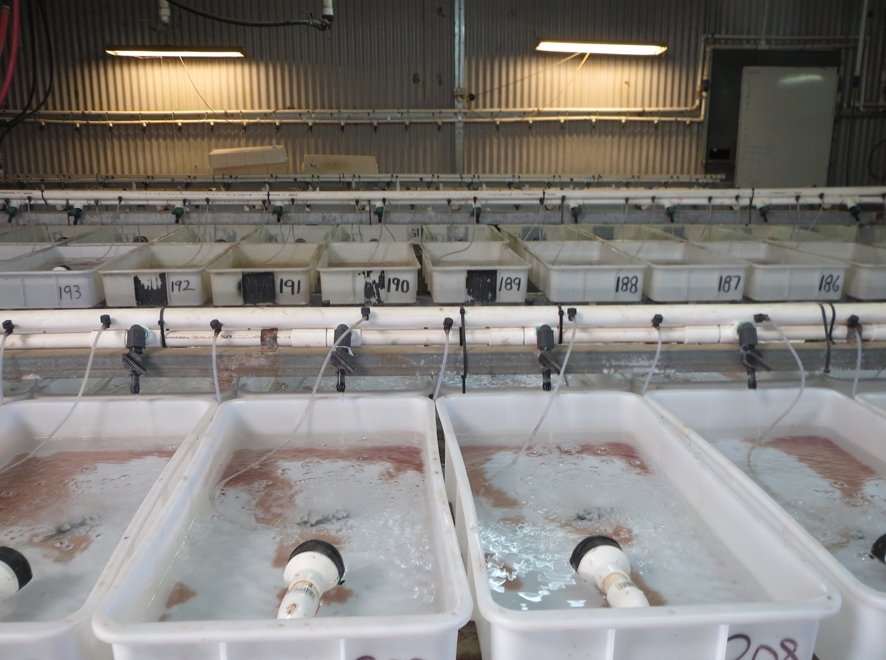 Over three-million Murray cod larvae will pass through the nursery each year in these trays.
Print this page