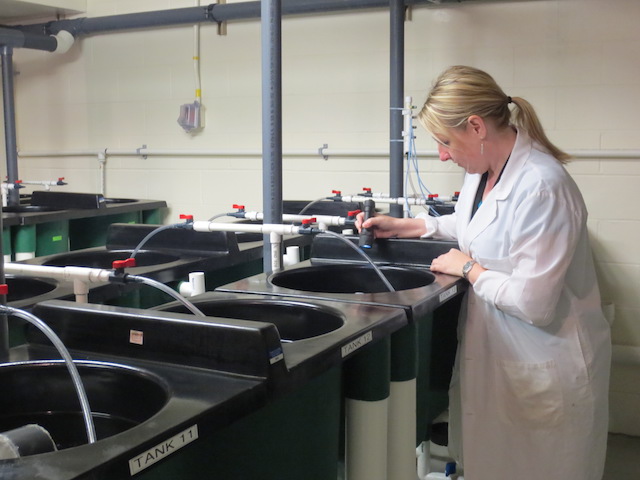 Terralynn Lander peers closely into one of 24 tanks set up at Fisheries and Oceans Canada (DFO) St. Andrews Biological Station in New Brunswick, Canada. To the naked eye it appears that the tank is empty, but upon closer inspection tiny flecks appear in the water column.

“Believe it or not, those are green sea urchin larvae complete with stomachs and little hairs or cillia to move about in the water column. They will be one of the next additions to Integrated Multi-trophic Aquaculture,” beams Lander.

With funding from DFO’s Aquaculture Collaborative Research and Development Program, Lander and Dr. Shawn Robinson have teamed up with Cooke Aquaculture Inc. to further study the possibility of the green sea urchin (Strongylocentrotus droebachiensis) as another species to grow at Atlantic salmon farming sites in Atlantic Canada.

Integrated Multi-trophic Aquaculture, or IMTA, has been studied at the Biological Station for approximately 15 years, initially focusing on species that feed on water column nutrients, such as mussels and kelp and then expanding into species that live on the ocean bottom such as sea cucumber, scallops and sea urchins. The goal of IMTA is to reduce the environmental footprint of aquaculture by filtering out by-products of a fed species, in this case salmon, and making them less available to the environment.

The project is focusing on the development of a hatchery system for the green sea urchin that is native to the Bay of Fundy. Wild sea urchins are a slow growing species which can take up to 10 years to reach maturity and typically spawn only once per year. It is hoped that a hatchery system will eliminate the need for capture of wild urchins and provide the possibility of multiple spawnings throughout the year. In addition to being another extractive species on the ocean bottom to reduce the environmental footprint of salmon aquaculture, it is hoped to provide potential income for the growers.

In the fall of 2014, Lander collected 60 urchins from the wild and held them in tanks with constant 9°C sea water. The urchins were fed kelp that was previously harvested and dried from an IMTA site at Cooke Aquaculture Inc. They grew very well over the winter months and by spring were ready to spawn.

When ready to spawn, each urchin was individually placed in beakers where the milt or eggs were released from the top of their body for about five to 10 minutes. The sperm and eggs were then carefully mixed; the fertilization rate checked under a microscope; and then placed in one of the 24 hatchery tanks. Once in the tank, the eggs fell to the bottom where they hatched within a few days. At this stage, the resulting larvae are capable of locomotion and move up into the water column where they are fed microalgae as a food source. Each tank contains approximately 40,000 to 50,000 larvae and the water is kept at a constant 9°C with a natural day length photoperiod.

Part of the project includes growing microalgae on site to feed the urchins. Once in the hatchery, daily sampling of the larvae is done to ensure that they are feeding and growing. According to Lander, “under the microscope you can see their gut or stomach contents and observe their growth from four, six, to eight larval stages. Once tube feet begin to grow, the larvae are then ready to settle to the ocean bottom.”

In the wild, urchins will settle where there is a good food source and substrate so Lander has developed yet another system to provide an ideal environment for this stage.

“Sea urchins have food cues in the wild, so we have provided coralline rocks for settlement and benthic diatoms, naturally occurring algae for this next stage.” The sea urchin is only approximately 500 microns (0.5mm) in size when it is ready to settle so again, a microscopic check is required to ensure that they are feeding and growing well enough to settle to the bottom of the tank. After they reach the juvenile stage, the urchins nutritional needs change yet again and they will start to feed on young shoots of kelp and other soft seaweeds.

Once the hatchery phases are complete, a containment system will be developed that allows urchins to benefit from the organic matter at the salmon aquaculture site. According to Lander, “we hope to place some of these hatchery-reared urchins in different containment systems at IMTA sites to see how well they grow.”

Further research and testing will be required prior to any commercial harvest, but Lander and Robinson are hopeful that the sea urchins will grow quickly and provide good quality roe in two to three years once placed at the aquaculture site.

Terralynn in the lab.