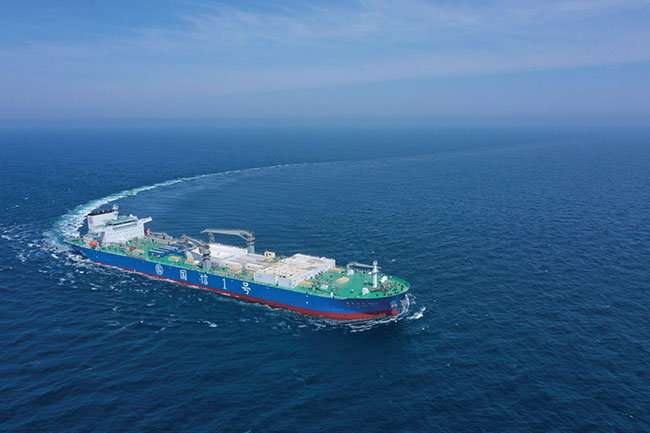 The latest aquaculture technology innovation in China has delivered an aquaculture ship, a.k.a. “movable marine ranch” offshore. With the optimum natural conditions and onboard technology, it is expected to produce an annual harvest of 3,700 tons of species such as croaker, grouper and Atlantic salmon.

Described as the “world’s largest fishing vessel with the most comprehensive functions, practicability and reliability,” Conson No. 1 was delivered in May in Qingdao, China’s eastern Shandong province.

It was deployed to the Yellow Sea, located off the city’s coast, East China Sea and South China. The maiden harvest of yellow is scheduled by fall.

Deputy general manager, Dong Shaoguang, reports that the ship is equipped with technology that produce a shorter aquaculture cycle than traditional cages and stocking density of three to five times more fish in the same space.

He also stressed the non-stop supply of seawater pumped into the tanks, leading to a stable environment. The controlled and enclosed environment keeps natural challenges at bay such as red rides, pollution and typhoons.

Underwater cameras, sensors and an auto-feeding system supports onboard operations. Connectivity allows land-based offices to monitor the fish, as well.

Same models, Conson-2 and Conson-3, are due for delivery by March 2024. The construction of an improved version, the Conson-4, is planned to begin in late 2023.

The company plans to commission 50 more similar vessels within 10 years.

The ship was designed to produce fish without polluting the environment. By going to open seas, it will produce fish in an open sea environment where there is no pollution. And this is the main goal of building the ship, according to the deputy GM.

Such a vessel has made it possible to push aquaculture areas farther out in the open seas, where high-quality seawater can provide important nutrients to the fish, Chen Zhixin, chief scientist of the Fishery Machinery and Instrument Research Institute, told Xinhua News Agency.

Conson-1’s operation is in sync with China’s Water Pollution Prevention and Control Action Plan. To sustain China’s supply of clean water, one of the directives is to put a cap inland and coastal aquaculture.

The maiden target harvest of 3,700 tons is similar to the output of Chagan, one of the China’s largest freshwater lakes.

The launch of Conson-1 has stirred global interest, with reactions that go opposite ways. This was reflected in comments to a Facebook post. There were those who, citing carbon footprints and discharged effluents, questioned points on “being environmentally-friendly.”

There were those who appreciated the merits of the vessel. Among them was Nuraini Arsad, an environmental scientist at Shell: “[I] can see how this might be a good innovation for fish export, actually.”

Instead of farming the fish on the coast or on land, and then transporting the fish frozen, she cited, the vessel returns for docking when the fish is ready for harvest. The same space is thus used for both functions.

“It arrives fresh rather than frozen, probably eliminating intermediate handling and/or packaging steps,” she said.

With regard to environmental issues, she said that the “mostly biodegradable effluent of aquaculture” goes to open sea.

“It would not be in danger of exceeding the local carrying capacity of much smaller/confined water bodies and ecosystems, which may even help spur oceanic productivity as it is normally nutrient-limited,” she said.