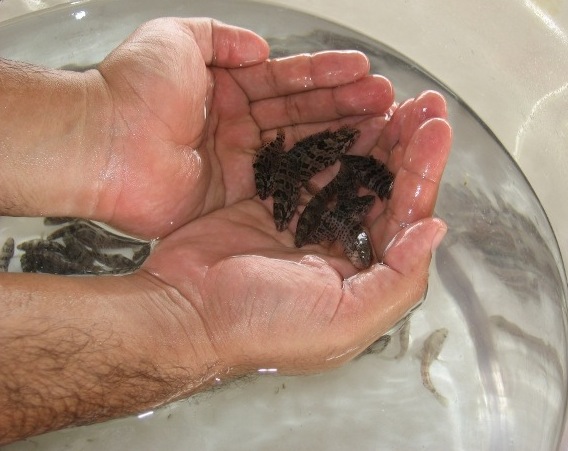 In an article written exclusively for Hatchery International

The authors note that it’s taken a few decades, but aquaculturists on the Saudi peninsula, and in the Middle East overall, have convinced early skeptics that growing fish in the unforgiving desert climate is doable. What’s more, they have developed a fish hatchery backbone to help furnish the burgeoning industry with broodstock, eggs, and fry for varied species.

As recently as this past June, Arabian Marine Development, Bank Sohar, and the Lim Shrimp Organization announced a new $120 million shrimp and sea cucumber hatchery and farm complex in Qurun, Oman, a country with a well established aquaculture industry on the southeast corner of the Arabian Peninsula.

With recent announcements of private and public investments in the sector over the coming years, the Middle East aquaculture industry is setting up to be a multi-billion dollar market.

With a suitable environment, a prime location close to markets in Europe, and increased seafood consumption in the region, there are huge expectations for a successful aquaculture industry in the region. Observers point out that the Arabian Gulf is currently on a journey to responsible and sustainable aquaculture with many countries focusing on fish hatchery development as well as offshore cage and inland recirculation aquaculture systems (RAS).

Last year was a transitional phase for many in the area as they had to swap production to sea bream and bass after whitespot disease caused significant problems for shrimp farmers. But all the same investment dollars continue to flow into the region as industry infrastructure comes online.

In February, the Sultanate of Oman, announced that it plans to invest $1.3 billion in fisheries development by 2020, and Saudi Arabia said it would inject an additional $10.6 billion into aquaculture projects to produce one million tons of fish over the next 16 years.

For instance, last year, Asmak, the International Fish farming Holding Co., announced two projects— an offshore cage farm at Delma Island in Abu Dhabi as well as a land-based RAS hatchery and farm. When all is up and running, the RAS facility is expected to produce 4,000 tonnes of salmon, seabream, barramundi and subaiti, a brown spotted grouper.

Asmak has similar operations across what is called the Gulf Cooperation Council (GCC), a political and economic alliance of six countries—Saudi Arabia, Kuwait, the UAE, Qatar, Bahrain, and Oman. In Bahrain, the company owns and operates a finfish hatchery which produces five million juveniles annually of all the species needed to supply their farms.

The National Mariculture Center in Bahrain, a small Arab state situated on the southwestern coast of the Persian Gulf, has successfully achieved the hatchery production of several species for the fish farming sector in that country as well as the region, according to Muthunayagam and Cardia’s paper.

A joint venture between the Bin Salem group and Germany’s United Food Technologies, the AquaOrbis Sturgeon Farm and breeding facility in Mussafah has a target production of 35 tons of caviar and 485 tons of sturgeon meat annually in their 50,000 m2 recirculation facility.

The Mariculture and Fisheries Division of the Kuwait Institute for Scientific Research (MFD-KISR) scientists have developed techniques for growing sobaity seabream from hatchery to commercial marketable size, as well as the culture of tilapia and introducing a new Kuwait tilapia strain.

In addition, Kuwaiti hatchery biologists are also working on year-round spawning and commercialization of Grouper hatchery techniques. The KISR facility recently renovated a fish hatchery over to RAS with a capacity of five million juveniles per year of three species—gilt-head bream (Sparus aurata), sobaity seabream, and grouper.

As with other countries in the region, Saudi Arabia’s hatchery sector is based on the RAS model, according to the paper’s authors.

Much of what is produced in hatcheries in the Saudi kingdom is done in the private sector, making it difficult for industry-wide research and standardization.

“When private firms lock up the breeding, larviculture and farming methodologies, then sustainable world food solutions… are likely to be beyond the financial means of the people who might need them the most. Widespread adoption of mariculture practices… require open source, public access to technologies,” the authors argued.

Further, the lack of Saudi government investment in the past has pushed the industry in the kingdom towards private investment.

However, after 20 years of identifying marine fish and shrimp that will breed in captivity and creating infrastructure to farm them profitably, the Saudi Government-owned Fish Farming Centre—presently the Jeddah Fisheries Research Center (JFRC) has found some success.

Successful spawning and production of the coral grouper (Plectropomus areolatus) and the roving coral grouper (P. pessuliferus), both known locally as “Najil,” has also been successful at the JFRC.

In Tabuk, Saudi Arabia, a new hatchery is being constructed to rear gilthead sea bream.

Experimental scale research efforts in indoor and outdoor hatchery trials have taken place in Oman, Yemen, and UAE. Though these countries “stand at the threshold” of research they are still advancing slowly towards commercial production levels in terms of technology and infrastructure development, explain the authors.

Outside of Bahrain and Kuwait, it appears there is a greater need for public sector investment in breeding centers and fish hatchery research in the region to help foster a more diversified hatchery space in some of the other countries.

“Successful breeding of a host of species in multi-species, flexible fish hatcheries cushions the losses or mortality risks in any one species,” the authors argued. “An assured flow of the farm gate product is also ensured, enabling a complete exploitation of the fish processing plant to its fullest capacity.”

Future hatchery efforts in the Middle East could focus on other lucrative species like greater amberjack and cobia, which have shown some success in small trial runs in the Arabian Gulf, the FAO officials stated.