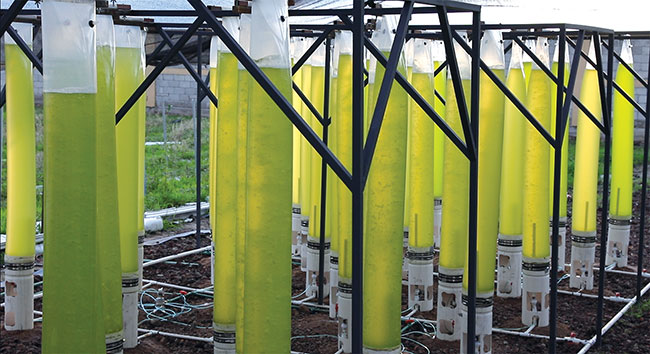 Wastewater from intensive fish farming can pose a significant threat to nearby marine ecosystems. With global pressure to increase production that ensures food security, one innovative company believes the aquaculture industry must take a long, hard look at reducing its environmental footprint.

MicroTERRA is a Mexican start-up that is turning heads in the industry for developing a scaleable water treatment system that could become a win-win solution for the local fish producer.

The company was founded in 2018 with the idea of unlocking the untapped resource contained in fish wastewater. MicroTERRA has developed a circular treatment system that pumps polluted water from fish tanks into a series of cylindrical bioreactors where microalgae is used to absorb nutrients, nitrogen and phosphorous present in fish waste.

Through the process of photosynthesis, microalgae is separated from the clean, oxygenated water. The microalgae can then be harvested and dried to produce up to 60 percent of the farmer’s own fish feed.

“The by-product is the protein and that is the way that we make it profitable, because the wastewater treatment process is quite expensive, especially for inland fish farmers in Mexico who are struggling to pay for the fish feed, which is up to 70 percent of their variable costs,” says Fanny Villiers, chief operating officer of microTERRA.

“So our objective is to provide a system that will treat their water and at the same time produce a high value microalgae biomass biomass that can be transformed into a feed ingredient, in order allow the fish farmers to have true and great savings on the fish feed. And with these savings, they can pay for the water treatment systems.”

Sustainable alternative
The company’s founder, Marissa Cuevas, got the idea for such a system after attending an environmental conference where the main topic of conversation was water conservation. Villiers says they were all shocked to learn that the main cause of water pollution in the world comes from runoff water from agriculture and aquaculture operations.

After doing some research, Cuevas discovered microalgae-based wastewater treatment as a sustainable method. Microalgae water treatment relies on phototrophic micro-organisms to supply oxygen to aerobic organic pollutants. As a result, this process removes nutrients and pathogens that are present in the water.

Latin America is an ideal climate for this system because the region’s warm climate and abundance of sunlight meant there was no need for artificial lighting or temperature to create an ideal environment for the bioreactors. It makes their system as cost-effective as possible.

The company first proposed the harvested microalgae as alternative fertilizer for the agriculture industry, however, Villiers says there was not much interest for it in the market. They then decided to look at microalgae as a feed ingredient.

Microalgae is also a well-researched protein alternative for fish feed because it is known to be a cost-effective ingredient that can provide essential nutrients and Omega-3 fatty acids, as well as antioxidants. Fish feed is the largest operational cost in any aquaculture facility, so developing a feed alternative that could reduce those costs is very attractive to farmers. 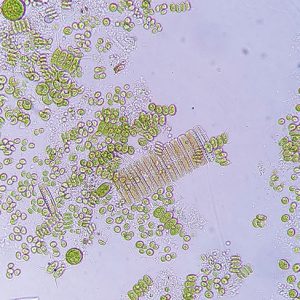 Microalgae ceparium under a microscope. 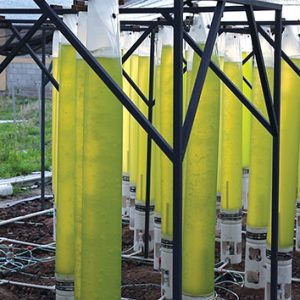 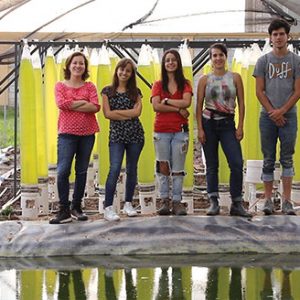 Pilot farm
The company’s pilot project was completed in June 2019. MicroTERRA worked with a local tilapia producer in Irapuato, Mexico, to build a system that can treat 5,000 liters of wastewater every three days and produce a total of 1 ton of dried microalgae every year.

“It was a great project for the team because we built it ourselves. We got to learn a lot on the farmer’s necessities, what are his pain points,” Villiers says. “The system was built with low-cost materials that you can buy in any agro shop.” That is critical, she adds, because the challenge with bringing in high-tech systems to Mexico from other countries like Germany, for instance, is that it can be difficult to find a technical person locally to maintain it, “so it’s not that sustainable.”

Paola Constantino, chief technical officer, says the microTERRA team is in constant communication with the farmer of their pilot system. Every week, a team member visits the farm to talk with the farmer about the everyday maintenance and operation of their system.

Using sensors installed in the bioreactors, water quality and the behaviour of the microalgae are constantly being monitored on a cloud platform that the farmer can access through a mobile app.

Going global
With data gathered from this 5,000-liter system, microTERRA has brought their innovation to the world stage. The company was selected for the 2019 cohort by the Techstars Sustainability Accelerator, a three-month mentoring and business development program backed by The Nature Conservancy and Amazon.

Most recently, Constantino also received a grant through the National Geographic Explorer program to support her ongoing research of applied biotechnology to fight climate change.

“We’ve been introduced to the national association of livestock feed production and they have a section for aquaculture where they have representatives from the biggest fish producers that are operating in Mexico,” says Villiers. “They’re super interested about the protein because they’re looking for alternatives to fishmeal all the time. So they’re asking for samples.”

The company is currently in talks with 10 different fish feed producers in Mexico. Aside from helping the local farmers produce their own fish feed to offset operational costs, microTERRA wants to liaise with fish feed producers that might be interested in buying these raw ingredients from the farmers.

“Our objective is not to compete with other fish feed producers,” says Villiers. “We prefer to focus on the biotechnology… So we want to partner with them, not necessarily to develop a formula, but to make sure that we have a go-to market strategy for us or for the fish farmers in order to sell the protein.”

Villiers says it feels validating for the company to be recognized not only by the Mexican aquaculture community, but by key players in the global market. What started out as a passion project to reduce water pollution has become a viable business to elevate aquaculture in Mexico.

“The objective is to go to market at the end of next year with a system that will have the capacity to treat 500,000 liters, which is the average volume of wastewater disposed by the fish farmers in the watersheds nearby the farm every day,” says Villiers. “This is where our bioinformatic strategy comes in because we can speed up the microalgae investigation, not only relying on what’s happening in the lab but also with real-time data.”

The company is currently evaluating tilapia farms in Mexico to install their second pilot. Villiers says they are looking for a facility where they can scale the capacity of the system at least 20 times.