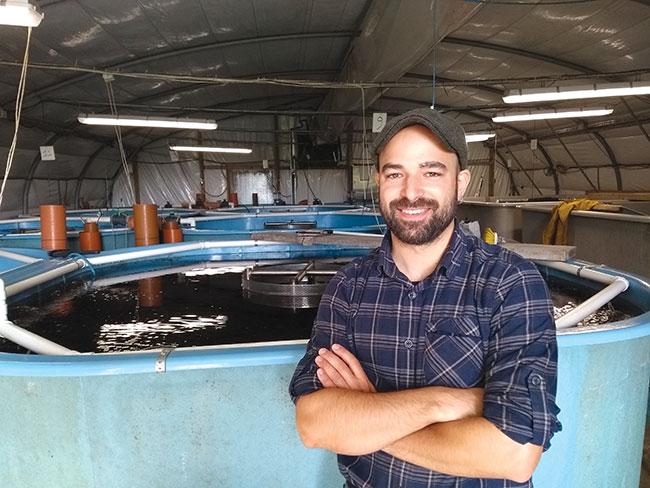 Matteo Capodicasa left his home country to be with the fishes.

As the hatchery manager for Keywater Fisheries in Sligo, Ireland, Capodicasa is responsible for the company’s production of juvenile Irish perch. His colleague describes his qualities ideal for the role of hatchery manager: attention to detail, patience, ruthlessness, enthusiasm and devotion to the species in his care.

“Matteo has significantly improved the overall health of fish on site by instigating a cleaning protocol,” writes Damien Toner of Ireland’s Seafood Development Agency in his nomination for Capodicasa. “He has also initiated the use of salinity to curb fungal outbreaks and has worked hard to develop protocols for broodstock development.”

Trained in freshwater fish production in Italy and with a bachelor’s degree in Natural Sciences, Capodicasa began his career as an aquaculture technician at a Como Lake restocking center in Italy, where fingerling production was focused on whitefish, arctic charr, pike, trout and graylings from wild broodstock. When the opportunity to manage a hatchery came up, even though it meant leaving his friends and family in Italy, he willingly took on the challenge and moved to Ireland.

A nature lover, Capodicasa has a special interest in botany, paleontology and ichthyology. At work, he has shown sheer commitment to his profession, according to Toner. “Matteo has improved the fish production at the (Keywater) site and significantly improved the growth rate of larvae. His work on broodstock has seen a gradual increase in broodstock quality which will hopefully be of benefit long into the future.”

Capodicasa says the ability to learn from one’s mistakes and learn fast is the nature of a hatchery professional’s job. “Aquaculture does not give you a second chance in the same batch of fish,” he aptly states, and it’s particularly true in the hatchery, where the fish are in their most fragile state.

As with the other hatchery professionals being recognized in the Top 10 Under 40, this hatchery manager notes the importance of having good problem-solving skills. “A good technician is also a good problem solver,” Capodicasa says.

The environment is top-of-mind for him and he is always looking for ways to incorporate sustainability into his work at the hatchery. Having trained and worked at a RAS system back in Italy, Capodicasa is now exploring the potential of integrating aquaponics into his company’s system, according to Toner. In addition, the Keywater Fisheries hatchery manager is conducting trials on the use of rice as a filter for wastewater.

“My ultimate goal is to establish new production protocols that allow us to reduce our environmental footprint, like a better growth rate and quality of the fish, focus on a more environmentally friendly food or the reuse of the wastewater as a fertiliser for vegetable production,” Capodicasa says.