Of all the ways to hunt and fish, few are more quintessentially Kiwi than the act of gathering whitebait.

In New Zealand, whitebait refers to the larval form of five Galaxiid species. These larval fish are caught as they return upstream from the ocean to continue growing and, eventually, to spawn. From August/September through the end of November, it’s rare to find a stream that flows into the ocean without someone standing watch over their whitebait net. To call it a popular Kiwi hobby is nearly an understatement.

Across the country, however, recreational and commercial catches have been in decline. Of the five species one can catch, four are labelled by the New Zealand Department of Conservation as declining or threatened. This is due to a variety of factors including an increase in river and stream pollution from industry and farming, and the introduction of aggressively invasive plant and fish species.

The decision of the government to continue to allow whitebait fishing has become a controversial decision across the country, with many calling for restrictions or a total ban of commercial harvesting.


Hope for the future

There is, however, hope for the whitebait species of New Zealand. Located an hour north of Auckland, in the small town of Warkworth, Manāki Whitebait (a.k.a. New Zealand Premium Whitebait) is New Zealand’s first, and only, whitebait farm.

The term Manāki is a Te Reo word that means to support, cherish or take care of others. The name is fitting. Originally built as a restoration hatchery, a small, dedicated team led by Paul Decker, Managing Director of the Mahurangi Technical Institute, began by cultivating all five species of whitebait. The hatchery was constructed and initially funded using private donations. This model, however, is difficult to maintain in the long term. In the words of Decker, “we knew we can’t keep doing this, but we need to keep going.” They needed a new financial model.

Fortunately they discovered that one of the whitebait species, the Giant Kōkopu, was an ideal candidate for commercial production. The Kōkopus viability stems mainly from its breeding characteristics. Unlike some of the other whitebait species, which spawn only once after two years growth and then die, the Giant Kōkopu is capable of breeding year after year, with their oldest brood being 10 years old - this is nothing for a Giant Kōkopu, which can live for 30 years.

The Giant Kōkopu also offers a higher rate of fecundity than other species and responds well to artificial rearing environments, growing from hatch to larval harvest in only 12 weeks. A new model was born: they were going to rear Giant Kōkopu commercially to generate income for their restoration work.

This model was one that Kiwi investors could not resist. While all investors involved in the Giant Kōkopu commercial operation are Kiwis, of note is the heavy Māori interest. Whitebait is a culturally and historically important food for the Māori. Local and nearby Māori investment fund managers saw, in this model, the chance to profit while working to bolster wild Whitebait populations. This offers the benefit of allowing the long-standing cultural tradition of Whitebait collection to remain viable for future generations.

While technologically speaking Manāki is not breaking new ground in RAS, the hatchery offers a shining example of conservation-oriented rearing practices. They have been able to achieve commercial production without the use of synthetic inputs, either in the form of treatments or spawning inducers. This is born of the desire to avoid introducing foreign contaminants into local waterways via their restoration releases, and to allow the fish destined for wild re-stocking to remain as hearty and self-sufficient as possible.

The hatchery’s ability to avoid these inputs is due to its regimented cleaning routine.

“Clean and green is what we say...we do more cleaning than probably most places in the world” says Decker. This commitment to clean production has allowed them to begin the process of organic certification, which Decker believes they will achieve without issue. They’ve also become the suppliers to educational institutions such as the National Aquarium which seek to source their display fish as sustainably as possible.

As a means of generating funds for restoration work, Manākis business model is working. The hatchery is currently doing several releases each year, including one release of 10,000 fish in Tawharanui National Park planned for May of this year. As more releases are conducted, interest from schools and environmental organizations in using their Whitebait in restoration projects is increasing. Decker foresees this trend continuing in the future.

The path to this point has not been without its challenges. Since it was the only Whitebait farm in the country, sourcing appropriate feed posed a problem. To rear efficiently, they had to switch from live to pelletized feed. Fortunately, their chief scientist, fish nutritionist Dr. Tagried Kurwie, was able to work with their feed producer to develop a Whitebait specific formulation, allowing them to achieve an FCR of 1.2:1. Culturing live feed for hatchlings, broods and stock earmarked for release still presents a challenge, as techs must learn the ins and outs of multiple culture techniques.

In the early days the team at Manāki was also having trouble with certain environmental cues causing their stock to change to a darker colour. In a discerning marketplace that demands translucent to light coloured Whitebait, this was troubling. However, the team was able to determine what was causing this transition, and they have been able to sort out these issues.

Another great challenge has been keeping the saltwater system full. Being located about 5 km from the nearest saltwater, Manāki must regularly truck in salt water to keep the RAS system topped up.

One release-stock specific challenge has been developing a procedure for “wildizing” the fish meant for release. In the weeks leading up to their release, none of the staff can let themselves be seen over the tank. This is so that in the wild these fish will not associate humans with feeding and will thus be as skittish and survival-oriented as their wild born counterparts.

Like any well-built operation, Manāki was determined to overcome these challenges because, at the end of the day, staff knew they had something special to offer the discerning public. In the words of Paul Decker, “everyone says it’s the best product they’ve ever tasted.” This is, in part, because they’re able to purge the fish before harvest.

Purged Whitebait offers a cleaner, purer taste without any of the unpleasant grittiness one can find in wild Whitebait. They’re also able to kill their harvest instantly and maintain the cold chain to market. The lack of stress response and short turn-around time between harvest and sale means the fish end up being the best looking on the market.

“You can see the freshness in them…they’re glistening,” says Decker. “They’re the sturgeon of the Pacific.”

Having proven to the investors that this can work, Decker and his team are looking toward a bright future. They are currently assessing sites for a new, modern facility. This is an important next step because within the next couple of years they hope to be producing 50-100 tons per year.

They are also working to remove barriers to increase exports. Currently, their product will occasionally be stopped during export because Whitebait is flagged as an endangered species. The team at Manāki is focused on ensuring these holdups are avoided.

They’re also hoping to increase international recognition of the delicious, high quality nature of their New Zealand Whitebait. In many other national markets, Whitebait is used a generic term for low quality white fish. Naming the company’s Whitebait Manāki is, in part, to help differentiate it, an approach comparable to that of the Malepeque Oyster growers.

With the lessons of the past in their back pocket and the vision of a new facility in their eyes, Decker and the team at Manāki Whitebait will continue to change the Whitebait market for the better. 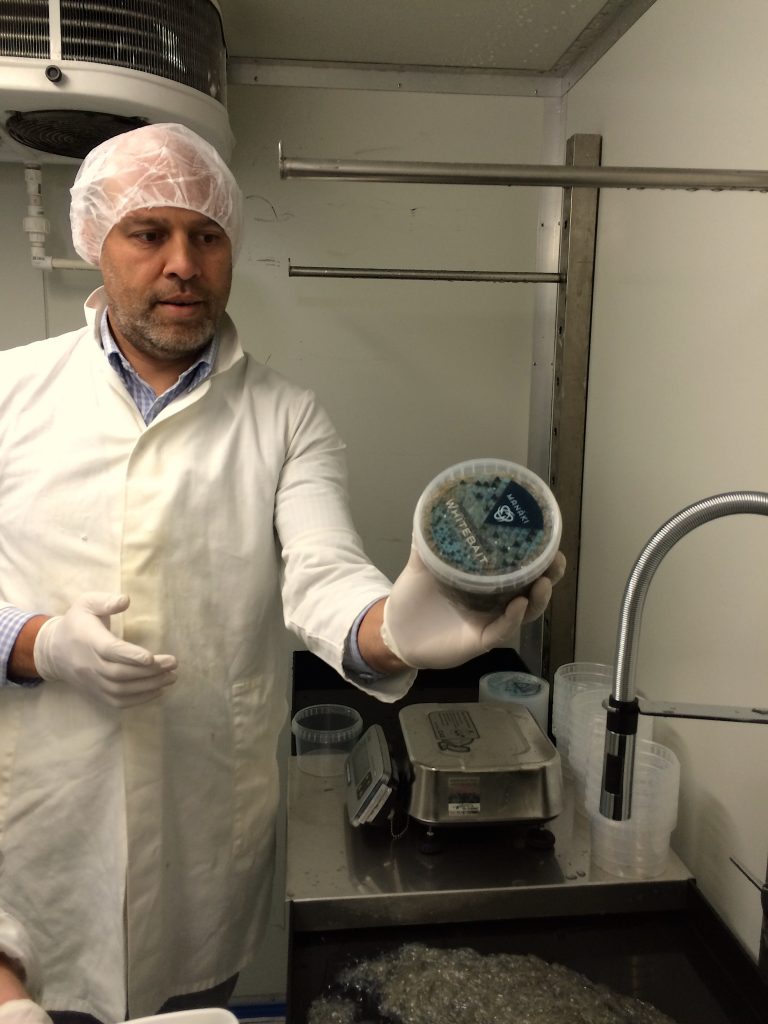