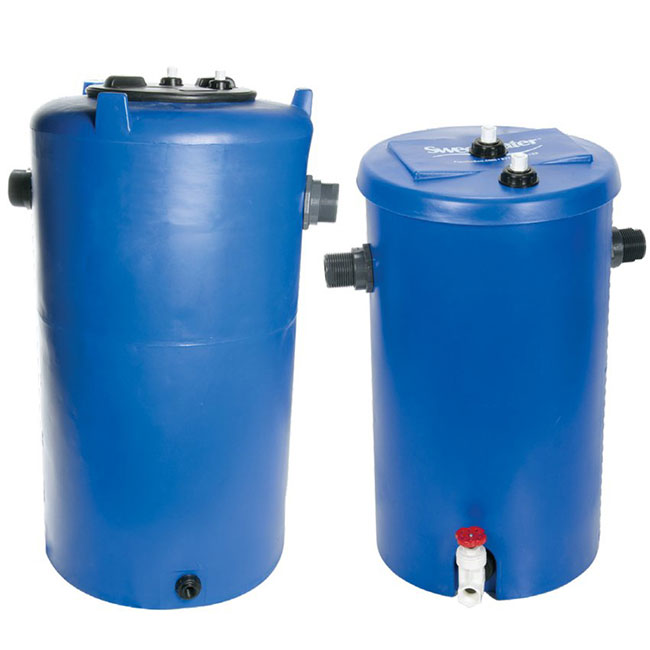 Biofilter function
Fish produce waste in the form of ammonia (NH3) which is toxic to fish. In a recirculation system, this ammonia is removed by the biofilter. The biofilter consists of a bacteria colony, called nitrifying bacteria, which digest the ammonia and produce much less toxic nitrate. Two bacteria, Nitrosomonas and Nitrobacter, perform the task. Through the process of biological oxidation, ammonia (NH3) is consumed by Nitrosomonas and nitrite (NO2) is produced. Nitrite, the waste product of Nitrosomonas, is also quite toxic to fish. Nitrobacter, occurring alongside Nitrosomonas, oxidizes the nitrite producing much less toxic nitrate (NO3). Based on this principle – called nitrification – a biofilter is an established colony of bacteria living on media, used to remove ammonia and nitrite, which are the waste products produced by fish.

Selecting media
Choosing a biofilter and a media can be quite difficult. The number of different units and media types can make the task daunting, especially with new innovations appearing regularly. Surface area:volume ratio is a key factor for choosing and sizing biofilters. The more surface area you can pack into your biofilter the larger your bacteria colony and the more ammonia can be removed. An undersized biofilter will be the limiting factor for the biomass a system can support. For moving bed and floating media biofilters, industry has moved away from the larger biobarrels and bioballs to smaller plastic media with a better surface to volume ratio. For self contained units, make sure to choose a unit with the best surface area:volume ratio and to oversize your biofilter.

Bacteria colony management
Aside from day to day maintenance, such as screen washing and backwashing, care must be taken to manage the health of your bacteria and, thus, the effectiveness of your filter. Daily water quality analysis of metabolites will provide the information basis for biofilter management and allows one to track the biofilter’s effectiveness. Unlike other filters, the biofilter is greatly affected by changes in water quality. The amount of fish in the system will determine the size of the bacteria colony in the biofilter, and sudden changes in biomass will affect the biofilter. When the system biomass decreases as fish are removed, the bacteria colony will partially starve and shrink. Issues can occur when biomasses are increased when new fish are stocked and the diminished bacteria colony takes time to “catch up” to the new amounts of ammonia and nitrite available. In order to keep the bacteria counts high, farmers will “feed” them during low biomass periods by strategically placing a simple source of ammonia near the biofilter.

Keeping an eye on nitrite
It is easy to forget that nitrite is also highly toxic to fish. Fish exposed to high levels of nitrite will develop brown blood disease, which interferes with the fish’s ability to uptake oxygen. Nitrite levels always ‘lag behind’ ammonia levels. When the biomass increases and the biofilter adjusts to the new levels, the biofilter will grow first to digest the new levels of ammonia, then grow to digest the growing levels of nitrite. It could be a week or two after the colony is digesting all available ammonia before the colony adjusts to digest all available nitrite. To combat periods of increased nitrite levels, chloride (Cl-) can be added to the system in the form of sodium chloride (NaCl) for calcium chloride (CaCl2), which will negate the effects of nitrite.

Treatment considerations
Treatments can have immediate and/or long-term effects on a biofilter depending on what treatment product is chosen. Because it is a closed system, treatment products applied to fish will affect the biofilter. A bypass line is a good option but not possible for all biofilters. A bypass valve allows the biofilter to be isolated from the system while a treatment is going on and the treatment products are removed or diminished. Chloramine T is notoriously tough on biofilters, potentially eliminating most of the colony. Because they consist of living organisms, the biofilter can be adapted to resist the diminishing effects of some products. The bacteria can be conditioned for salt and, surprisingly, formalin. The bacteria will even adapt to slowly consume the formalin and eliminate it from the system. Hydrogen peroxide will diminish the biofilter in the short term, depending on concentration. Whatever the treatment, be conservative with concentrations until you are confident with the effects on the biofilter.