Almost 30 years have gone since three scientists successfully inserted the Chinook salmon growth hormone gene in an eyed-egg of Atlantic salmon at the Memorial University of Newfoundland, Canada. 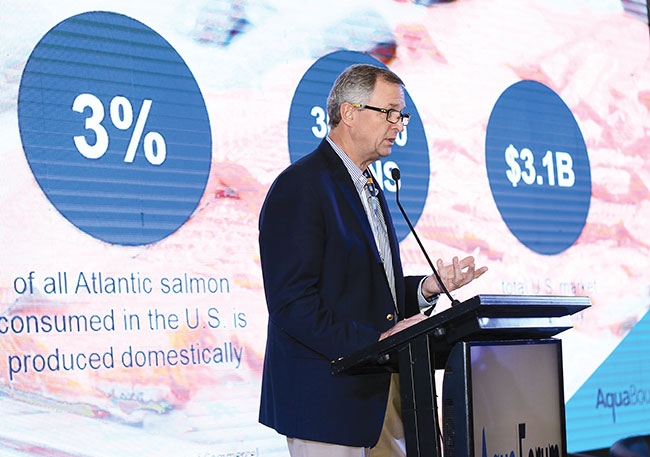 Alejandro Rojas said Aquabounty’s initial plan is to produce and sell AAS to established distributors and in the long term have their own branding. “In the future Almost 30 years have gone since three scientists successfully inserted the Chinook salmon

Twenty years have passed since Aquabounty started a project intended to produce transgenic salmon: the AquaAdvantage Salmon or AAS. Problems, setbacks, 13 generations of salmon and lots of red tape later, these fish are now being farmed and sold for human consumption. Here is why and how.

Advantages of AAS
At the recent international conference Aqua Forum, held in Puerto Montt in late October, Alejandro Rojas, COO at Aquabounty Technologies Inc., made a case for adopting the transgenic salmon.

Fast growth is the workhorse of AAS, he said. “The major advantage of this application is the shorter growth process from first feeding to fattening stage (4.5-4.8kg). We can reach harvest weight in 16 to 18 months without a problem.”

Meanwhile, improved feed conversion rate (FCR) is described as the second qualitative advantage. “Due to its high nitrogen retention rate, FCR of these fish is 25 percent better than that of traditional fish. This has not only been tested in trials, but also replicated in our Panama site with several generations of fish,” Rojas said. “Even below 0.87 without a problem and year after year.”

The last element in the trifecta, according to the Aquabounty executive, is where this fish should be produced: RAS farms in the largest salmon consuming countries. According to Rojas, this means 23 to 25 times lower carbon footprint compared to Norwegian and Chilean salmon in the U.S., and reduced freight costs. It also avoids the use of chemicals, antibiotics or pesticides, with little to no impact on the environment.

RAS as ally
Two decades ago, AAS was initially produced in closed containment aquaculture systems to establish a physical barrier and avoid fish ecape. Today, Aquabounty seems to have mastered this technology and claims that AAS “enables land-based, environment-friendly production systems to be economically viable versus current sea-cage production systems” and thus eliminating the risk of pollutants or contaminants that could harm marine ecosystems.

Moreover, since salmon supply is constrained in production locations for environmental and regulatory issues related to the current production methods, land-based production of AAS would be the way for supply to meet an increasing demand, Rojas said.

“We are focused mainly in the United States due to the large market that exists there,” he added. In that sense, one of the company’s goals is to reduce the U.S. seafood deficit.

Although this might pose a threat to traditional salmon farmers, some Chilean producers think otherwise. “There will be space for everyone in the market. There will be demand for transgenic salmon, for salmon made in land-based facilities, organic salmon, etc. The amount of protein that is going to be required to feed the world is so high that there will be room for everyone,” said Gerardo Balbontín, general manager of Salmones Blumar.

Alejandro Rojas said Aquabounty’s initial plan is to produce and sell AAS to established distributors and in the long term have their own branding. “In the future

Present and future
AAS has already been approved by the FDA and Canadian regulatory authorities for production, sale and consumption in the United States and Canada.

“The FDA and Health Canada have proved that AAS and conventional salmon are the same in nutritional, hormonal, chemical, organoleptic and any other relevant terms,” Rojas said.

Breeders and eggs are produced in Prince Edward Island (PEI), Canada. Meanwhile, Aquabounty has produced and exported 10 tonnes of fresh salmon fillets in 2016 and 10 tonnes of frozen ones from its Panama site to Canada. The company is running different trials in Argentina and Brazil.

Moreover, in June 2017 the company purchased a freshwater site in Indiana intended to raise AAS in the U.S., once the FDA establishes the labelling guidelines for transgenic food products.

“We are currently in the process of renovation and upgrading of this farm. We hatched our first conventional salmon eggs there by the end of June 2018 and expect our first harvests in Q1 2020. Our second latest investment is a smolt farm in PEI, for our development project of transgenic trout. We also have two additional RAS farms under construction, one pilot facility to produce 250 tonnes of AAS, intended to demonstrate not only the technical feasibility, but also the economic feasibility and profitability of the project; and the other plant is a new breeding center that would allow us to provide eggs all-year round.”