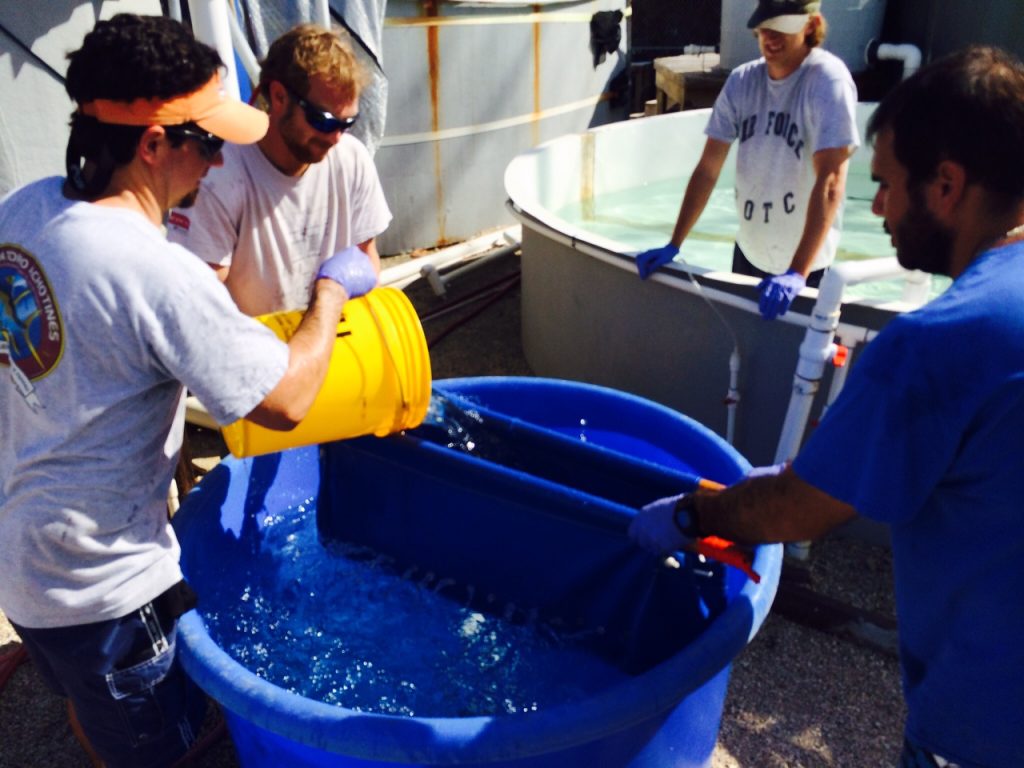 This includes broodstock maturation, spawning and larval rearing techniques aimed at increasing survival at high densities, intensive systems needed to grow these fish, and others of various marine species, in commercial offshore operations.

The team notes that the techniques and technology developed by UMEH can also be transferred to the private sector.

“We keep improving methods and producing more and more fingerlings. The follow-up is taking it to the next step where we find a private partner to take the fingerlings and develop the growout stages and technologies,” said Benetti.

The Aquaculture Program reportedly gets over half of its funding from the private sector wanting research and technology based on the incubation technology developed by Benetti and his colleagues.

The RSMAS team also conduct research and development on species like cobia, pompano, goggle-eye and blackfin tuna as well as snapper, grouper and flounder along with its industry partners abroad. But the most exciting thing going on these days at his hatchery Benetti told Hatchery International is the mahi-mahi and pompano research.

“Our mahi program continues to thrive,” he said. “Broodstock routinely spawn and we’ve been producing large quantities of fingerlings routinely for experimental trials. We’re submitting another proposal this week to resolve cannibalism and aggressiveness during the nursery and growout stages.”

“As you know we have collectively been working with mahi since the ‘80s. We closed the life cycle of the fish back then,” he explained. “But now the hatchery has come a long way and we’ve been able to produce large commercial amounts of fingerlings. Although that’s good, there’s still some work to do with this fish.”

He explained that there are still some challenges and particular mahi idiosyncrasies, like cannibalism that have to be worked out.

“We have discussed and are looking at that issue,” said Benetti. “Maybe we produce just females and maybe also introduce lithium into their diets at certain stages in the cycle.”

He added that the pompano program is making headway as well, with similar numbers of production matching the mahi.

The university and its experimental hatchery play a major role in education and training and have been at the head of U.S. mariculture research and technology transfer for decades. Located on Virginia Key in Biscayne Bay approximately one mile southeast of Miami, Florida, the hatchery includes a number of culture areas which give the facility the capability of concurrently running a diversified program with different fish species.

The facility provides several culture areas that include:

The facility was designed and constructed so that each section may be operated as an independent unit or integrated into any type of combination or continuous experimental configurations. Environmental controls give the facility the capacity to simulate a variety of natural conditions, including temperature, light, etc found in marine ecosystems.

The mahi program has been in place since the 1980s, and Benetti has been on the marine fish hatchery field since his early Ph.D. days. Benetti started the mahi program in Hawaii along with his colleagues, Randy Hagood, Syd Kraul, Steve Nel and Tony Ostrowsky. “They have all played a major role in developing mahi hatchery technology. With the new staff at UMEH, among them John Stieglitz, Ron Hoenig, Carlos Tudela, Zack Daugherty and others, recently we have greatly improved and perfected the technology developed back then,” he said.

Over the years he and his team have also explored the spawning of cobia in broodstock maturation systems. They’ve also published research articles on the advantages and efficacies of commercial probiotics relative to oxytetracycline as a bacterial control agent in rotifer and artemia culture.

He said another value his program delivers to the industry is in the qualified and trained graduate students who go on to the private sector.

Benetti doesn’t believe his institution is an example of what some have called ‘the great exodus’ of aquaculture technology and knowledge to overseas offshore mariculture businesses in Latin America, Europe or Asia.

“All our capital investment comes from the USA, the research value is here, and our protocols and technology are really shared primarily with hatcheries at companies in the Americas.”

One of those companies is Brian O’Hanlon’s Open Blue, one of the largest sustainable cobia farming businesses in the world, with its offshore farms in Panama. Another such partner is the Costa Rica-based franchise Marten Mariculture, which grows rose spotted snapper from egg to market.

Over the next five years, the focus will be on growth, he explained.

“We are expanding in staff and facilities to develop new standards and technology for sustainable aquaculture, including tuna,” he asserted. “It’s very important to develop a standard of incubating the marine species that are most likely to be farmed commercially.

He also added he sees a brightening future for domestic offshore mariculture in the Gulf of Mexico.

“I’m on the team of the Gulf Coast Marine Life Center, which is a multi-intuitional type of consortium involving several states to spearhead restoration and sustainable aquaculture in the Gulf of Mexico,” said Benetti.

The University of Miami’s Rosenstein School of Marine and Atmospheric Science (RSMAS) Experimental Hatchery (UMEH) is supplied with a reliable flow of ambient seawater with aeration in all parts of the system. A diesel-powered 150kw generator provides emergency power to all essential pumps, chillers, incubators, blowers and critical lighting.

Seawater is drawn from Bear Cut on the coast of Biscayne Bay through dual intakes by two 900 gallon per minute (gpm) electric pumps. The water then flows into a 60,000 gallon settling tank system to remove suspended solids and particulate matter. After leaving the settling tank the water is driven through a bank of six sand filters by two 500 gpm transfer pumps. When the water completes its sand filters’ mechanical filtration process, the water is subsequently stored in an 8000 gallon head tank where it is available to the facility through gravity flow.

Filtered, low-pressure air is supplied to the entire facility (with the exception of the phytoplankton culture lab) by two redundant 10 hp, regenerative, high-volume, low pressure blowers.

The conditioning and spawning systems are made up of an expandable series of five tanks and support components designed to provide researchers with the ability to control critical environmental parameters over a wide range.

Raw seawater flow can be maintained continuously at a rate of 5 gpm and is filtered down by heavy duty cartridge filters. The recirculation system is capable of turning over 80 gpm and includes sand filtration, temperature maintenance, and a biofilter which provides both nitrification and aeration.

On these systems, water temperature can be maintained +/-20deg F above or below ambient, at a replacement rate as high as five gallons per minute. Systems can be combined for additional heating and chilling capabilities.

There are five maturation systems ranging from 80 tons to 30 tons and 5-8 meter diameter. Each of the tanks can be configured as an independent system running raw seawater in a single pass flow-through, a completely closed recirculating loop, or any combination of the two. Besides, there are four 12 tons and four 5 ton larval rearing tanks, plus complete live feed mass production systems for Rotifers and Artemia and two systems for nutrition research comprised of eighteen 1 ton tanks and 12 five ton tanks.

For more information on the Experimental Hatchery at the University of Miami’s Rosentiel School of Marine Science and Atmospheric Science go to: http://www.rsmas.miami.edu/groups/aquaculture