Features Breeding Genetics
Made in Chile

An inside look at Hendrix Genetics Chile’s massive R&D facility in Catripulli, Chile 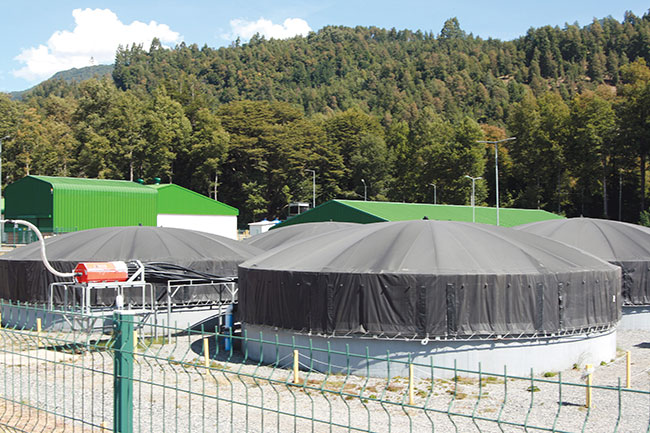 With a production capacity of close to 50 million eggs per year, the Catripulli CMG currently produces between one and two million eyed-eggs every month. All photos: Christian Pérez-Mallea

Located in the Araucanía region and covers 84 acres of land, the Catripulli Genetic Improvement Center (CMG) is about 140 kilometres east from Temuco and 15 kilometres north of the volcano Quetrupillán. Formerly belonging to Troutlodge, the facility was taken over by Hendrix Genetics in 2015 and was subsequently rebuilt and refurbished until its official opening in November 2017.

Equipped with the latest technologies in genetics development, the Catripulli CMG facility’s focus is on improving its salmon genetics in health, growth and resistance to disease and parasites, according to a statement from Hendrix Genetics when the facility was inaugurated in 2017.

The centre uses the Landcatch strain as the genetic base for its ova. Originating in the 1980s, the strain was formed with genetic material from various Norwegian strains and Scottish wild stocks, and developed through a genetic program that began in Scotland in 1996 and in Chile in 1998.

Subsequently, this strain began to be evaluated and improved for the Chilean environment, thanks to the use of sentinel fish in farming conditions and experimental trials and challenges. Traceability from sentinels provides feedback on the fish performance, while experimental farms allow disease challenges and evaluations in fish.

The facility
With a production capacity of close to 50 million eggs per year, the Catripulli CMG currently produces between 10 and 12 million eyed-eggs every quarter. The production facility uses 25 out of the 84 acres that span the property. The land is covered with native forest, while its largest natural asset is a watershed emerging within the premises that serves as the main water source.

This facility has an installed capacity of 4,000 m3 divided into: 184 tanks of 400 litres each in the family room; 12 tanks of 30 m3 in the smolt room; and 18 tanks of 200 m3 in the fattening terraces. Eight of those largest tanks operate with water reuse of up to 85 per cent, while the rest runs on a flow-through system.

The water used in incubation is treated with rotofilters and UV. In turn, the water entering the family room is treated with a dolomite filter to increase the hardness (dissolved calcium and magnesium) of the water; the rest of the input water have no treatment. Meanwhile, a rotofilter and an ozone filter (for the remaining water from the filters) treat the effluent, which contributes to the Huililco river.

Egss are produced year-round, says Christian San Martin, production manager of Hendrix Genetics Chile. “We broke the natural seasonality of this species of fish. Naturally, it spawns from May to August in the southern hemisphere. Now, we produce eggs every single month.” Thermal control of water and photoperiod control are fundamental to this year-round production, he adds.

The farm is negative for IPNv and ISAv, while the prevalence of BKD is between 0.4 and 0.6 per cent, San Martin says. “The concept of animal welfare is deeply rooted in our process and has to do mainly with the reduction of handlings (in number and duration), which has a positive impact because fish are healthier. We take advantage of some technologies with that purpose, such as ultrasound to check our fish and reduce palpations. When they are breeders, the team is trained to determine, through ultrasound too, the levels of gonadal development, both in males and females,” he explains. 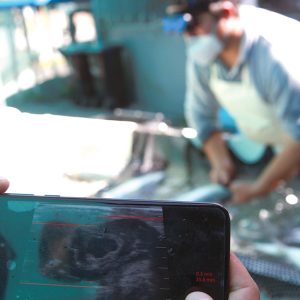 Driven by animal welfare, the company performs ultrasound scans on breeders to determine their gonadal development, which can be observed on a smartphone. 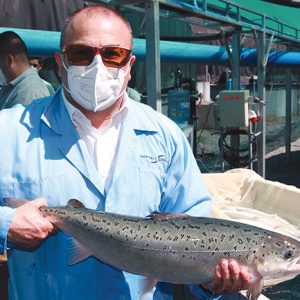 “We broke the natural seasonality of this species of fish” says Christian San Martin, production manager of Hendrix Genetics Chile. “Naturally, it spawns from May to August in the southern hemisphere. Now, we produce eggs every single month,” he adds.

The water entering the family room is treated with a dolomite filter to increase the hardness (dissolved calcium and magnesium) of the water.

The product
All research and development activities at the Catripulli CMG are focused on the genetic program, according to Alejandro Alert, genetics and R&D manager at Hendrix Genetics Chile.

“Our commercial product has a high genetic and sanitary standard. For all other non-health traits, the idea is that our product has the best possible performance; that they grow better and have better quality aspects (carcass yield and color) in the process plant,” he says.

To achieve this, state-of-the-art genetics technologies are used at the facility through the application of quantitative, molecular and genomic tools. Molecular genetics is used to determinate IPNv resistance (QTL), for example, while genomic selection helps to recognize multiple gene patterns related to resistance to Caligus (sea lice) and Piscirickettsia salmonis (SRS), the most challenging headaches for the Chilean salmon industry. Moreover, the company has also started identifying the phenotypes to be measured for BKD associated with resistance or susceptibility, and a similar project is aimed at the complex gill disease.

Overall, the top objectives are to balance improved growth, robustness (disease resistance and optimal fish shape), quality and very low early maturity. This latter aspect gains lots of importance during the COVID-19 pandemic, since several salmon producing companies have been forced to harvest average weights close to seven kilograms per fish due to logistical challenges.

However, because of the significant latitude difference between production regions in Chile, the clients’ requirements are also diverse. “We have sent different sentinels (copies of our genetic nucleus) to the regions of Los Lagos-Aysén and Magallanes for the past four years. This allows us to have an evaluation of the genetic-environmental interactions. In this way, performance rankings will vary in different environments, because other genes are expressed. This has made it possible to develop products aimed at one region or the other,” Alert says.

Community relations
Engaging with the community from the very beginning is part of Hendrix Genetics Chile’s corporate mantra, according to the company’s people and territory manager, Karen Oyarzo. Some of the nearby residents were involved in building the perimeter enclosures of the first tanks, she notes.

“Half of our workers are from the closest communities. The interaction we have had with them has prevailed over time and today they are a fundamental axis for us, precisely because of the relevance that neighbours are having in all production units,” she adds.

Currently, the company participates in long-term dialogues with six Indigenous communities, in addition to other social institutions, such as clubs for the elderly, neighbourhood associations and sports clubs.

“What has prevailed over time and has sustained good relations has to do with trust and transparency. For example, they have access to all our water tests,” she says.