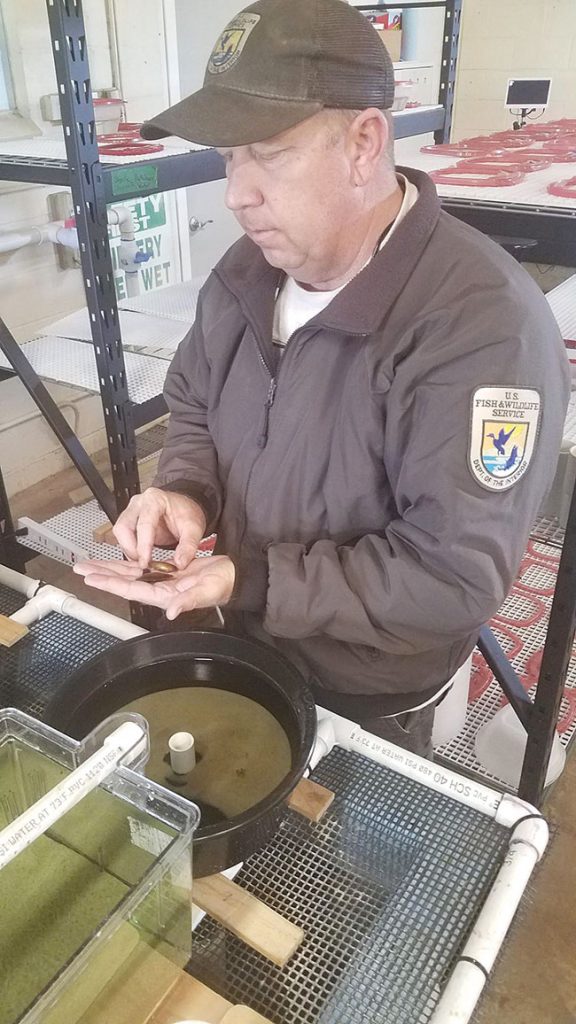 The freshwater pearlshell mussel has a distinction. It is found in only two places on the planet – both are in Louisiana parishes.

“It is a federally listed threatened species of the United States,” says Brett Hortman, project leader, Natchitoches National Fish Hatchery (NNFH) in Louisiana, U.S.A. “This oblong species (measuring 100mm long) is threatened by the loss and degradation of its habitat. These habitat changes are caused by impoundments of the waterways, road maintenance, livestock grazing and gravel mining may also cause increased sediment.”

Years of research has determined that it was necessary to find the Louisiana pearlshell mussel host fish to be able to propagate it. During the first few years, the hatchery collected native fish from the streams to check to see if they were carrying the larval mussels, called glochidia.

Hatchery staff determined that the grass pickerel was the host fish. Researchers culture them at the hatchery so there was no need to remove them from the streams in case there is a population problem that would impede natural reproduction.

Researchers have discovered that 40 per cent of all fish species live in freshwater, and most amphibians, countless insects, reptiles, plants, birds and mammals live in or on it. Out of this diverse and critically important resource, 40 per cent of America’s rivers are unfit for various human needs. It is in the context of this scarcity that the Louisiana pearlshell mussel is important.

Controlled propagation
“Methods for controlled propagation of the Louisiana pearlshell were first developed in 2016 and have been improving through research,” says Hortman. “Beginning in February around the onset of spawning, NNFH staff visit potential source populations to examine the gills of the pearlshell for signs of gravidity using a prior established non-damaging method.”

Gravid females are temporarily removed from the native location and brought into captivity at the hatchery to supply glochidia for captive propagation. After glochidia are naturally released, they are put into controlled containment with grass pickerel, where they readily attach to the host fish until they are transformed into Louisiana pearlshell juveniles. All maternal females are uniquely marked for identification and contained separately from each other; thus, progeny can be directly traced back to the mother.

Once glochidia are released, the maternal mussels are expeditiously transported back to their capture location and repositioned naturally into the substrate near the periphery of the mussel aggregation to limit disturbance to the other mussels, Hortman says.

Unique identifiers on the females allow post-release monitoring and preclude the repeated collection of a single specimen. Wild stock, hatchery-born Louisiana pearlshell juveniles are successfully propagated and reared in captivity, with all juveniles uniquely marked for identification and monitoring.

Reintroduction sites will be selected based on consideration of genetic management and location-specific recommendations: analysis of historic, current, and desired future distribution of the species within the natural range; status of current on-site habitat conditions; analysis of known or expected current or future threats; and the ability for long-term, on-site habitat protection, habitat management, and access for reintroduction and monitoring activities.

“All of these sites are on U.S. Forest Service Lands and these habitats are protected,” Hortman says. “We partner with the USFS to recover these mussels. They have historic data that they have been recording for years that helps us determine the most needed creeks to work in. We also have worked closely with the U.S. Forest Service and the Ecological Services Office in Lafayette, La. to ensure compliance with the Endangered Species Act.”

Reintroducing juveniles over several years at a given location will mimic a more natural situation by allowing for various age classes and different parental stock, while increasing the number of Louisiana pearlshells to an adequate number to exhibit natural reproductive behavior and produce viable offspring. The mussels raised and released are two years old.

“We do not raise them to maturity,” he says. “We only remove sexually mature mussels for a short time to get them to release glochidia at the hatchery. We immediately place them back in the mussel bed and into streams with good habitat so we can monitor them in the future.”

He adds it is important to ensure that these mussels continue to survive in the wild.