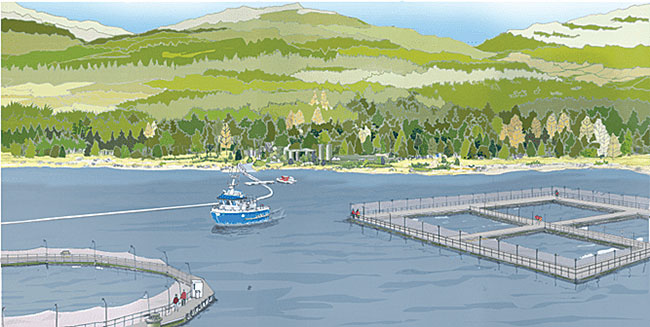 Loch Long Salmon (LLS) in Scotland is on course to create the country’s first semi-closed production unit with follow-up ambitions to build four more semi-closed units over the next five years.

The development is a joint venture operation between Simply Blue Aquaculture, Trimara Services, and Golden Acre Foods, and has already been presented to local authority planners as a major step forward for environmental stewardship and animal welfare in relation to Scottish aquaculture.

The first farm, to be called Beinn Reithe Fish Farm, is scheduled to be built in 2023. Located in Loch Long, a 20-mile-long sea loch contained within Argyll and Bute, the farm will be a post-smolt operation. However, LLS director, Stewart Hawthorn, told Hatchery International that the new business will be looking to source smolts from Scottish suppliers and that the semi-closed design will enable them to work with 95- to 100-gram smolts, rather than being restricted to larger intake sizes.

The first big step for LLS is to secure planning approval from the Loch Lomond and Trossachs National Park Authority, who control the selected location for Beinn Reithe. The business has already been told that their planning application is in order and will be considered in April 2022.

Although destined to be substantially more expensive to build than would be the case with a conventional open-net system, the new farm is seen by the LLS partners as a strong and cost-effective long-term farming solution, with the potential to help Scotland achieve a doubling of farm salmon output by 2030.

The semi-closed model, already used in Canada and Norway, has a conventional appearance at surface level but is quite different under the water, where an outer barrier is constructed around an inner net, within which the farmed salmon are kept. Water is pumped through the enclosure from deep below the surface.

The outer barrier, which is impermeable, is designed to prevent sea lice from entering the farmed environment, thereby stopping sea lice from attaching to the salmon. The pumped water is also drawn from beneath the depth at which sea lice live. The outer barrier also prevents seals and other predators from seeing the fish. Another feature of the LLS design is that it will enable the vast majority of uneaten food and fish waste to be captured and dealt with.

Costly but cost-effective
“It is an expensive production solution in terms of capital and operating costs, at least for some items, but we believe Beinn Reithe will be entirely cost competitive in comparison to current open net designs, certainly in terms of overall production costs. This is because we will obtain a health dividend from the semi-closed design by effectively preventing problems rather than having to cure them,” said Hawthorn.

“As we will be preventing sea lice from reaching our fish, for example, we won’t need to treat for sea lice so will immediately save on treatment costs. The fish also won’t be damaged during treatment, which will be a saving from a welfare perspective. In addition, we won’t need to use any chemicals for treating the fish, which means no chemicals going into the environmental, delivering an obvious environmental dividend. And with no sea lice being able to breed on our farm fish, we won’t be affecting wild salmon or sea trout in the surrounding coastal waters.”

Hawthorn added that such health and environmental benefits would offset the extra capital cost, compared to an open net system, of such things as pumping water into the unit and any associated oxygen costs.

“We are obviously looking at a substantial investment to create Beinn Reithe, and the additional four farms we hope to have working in Scotland over the next five years,” he said. “We firmly believe, however, that a semi-closed approach to farm salmon is a very good model for coastal Scotland.”

RAS not for Scotland
Recirculating aquaculture systems (RAS) are continuing to be implemented in farms worldwide, but Hawthorn explained he didn’t believe the option of switching to a RAS in the new farms would be right for Scotland.

“Big investments in RAS systems to grow fish to market size are happening in such places as Miami, Japan, and South Korea,” he said, “but they’re not happening in Edinburgh or more remote areas of Scotland. RAS involves much higher operating costs than flow-through systems, which means RAS operators have to save money on freight for getting fish to market, to make them work financially,” Hawthorn continued.

“In contrast, our big advantage in Scotland is our pristine, fantastic marine environment, which is why we’ve chosen the semi-closed approach to keep the salmon industry here growing in coastal Scotland.”

When asked if he thought there would be any chance of a conventional open pen site being approved for the Loch Long site, Mr Hawthorn responded with a definite ‘no’. “Conventional systems are coming up against regulatory pressures and concerns from communities,” he said, adding that he didn’t believe an open net system would not be suitable for the selected Beinn Reithe location.

“It is ideal for us, however. It is a sheltered site, which removes potential infrastructure risks during bad weather, has a great shore base next to forestry land and lovely deep water, all of which is very important for our type of development. We will also be geographically isolated from other farms which means we can show what semi-closed technology can do without having to worry about anything that might be happening in the surrounding area.”

A 3,452-tonne limit
The planning application for Beinn Reithe specifies a maximum of 3,452 tonnes of fish being able to be held on the farm at any one time. The capacity of the four follow-on farms will be decided according to ‘a lot of environmental analyses’ to agree the holding limit for each individual location.

“Our stocking levels will be better than is possible with open nets but less than is achieved with RAS systems. This is because we have to control oxygen levels and water flows all the time,” Hawthorn explained.

“We will be able to take in smolts at around the 95 to 100-gram mark, being able to keep to smaller sizes due to the control and protected environment of our farm. As such, we will be looking for healthy and good quality smolts, which we will be seeking to source from Scottish suppliers.”

Asked whether or not he thought the LLS semi-closed vision might put the development on something of ‘clash course’ with farmers who are already running conventional open net systems, Hawthorn said he is confident that wouldn’t be the case.

“It is acknowledged in Scotland that we want to double the size of the salmon industry here by 2030. Continuing to do what we have done so far, however, will not deliver that doubling of output,” Hawthorn admitted.

“Farming salmon has so many green credentials in terms of low CO2 outputs, good animal protein, low land inputs and excellent feed conversion rates. As such, we are all starting from the same base, we all want the industry to grow in Scotland, and we want to stay firmly rooted in the country’s coastal communities. To do that, however, we need to find alternative farming systems of which the LLS model is one. We accept that our choice will not fit all locations and that it won’t replace existing units, but rather that it complements what has already been achieved in Scotland.”

Stewart Hawthorn, LLS director, has worked in the international aquaculture sector for more than 30 years in Scotland, Canada, and New Zealand. He has been responsible for many farming operations, including freshwater RAS systems, marine farming systems and breeding improvement programmes. He is currently the owner and director of Trimara Services UK Ltd, an aquaculture equipment and services company working with customers in Scotland and internationally.

Christoph Harwood, LLS director, is managing director and a founder of Simply Blue Aquaculture, which was established in 2018 with a view to developing new salmon farming models in Scotland. He is also a director of Simply Blue Group.