The success of an eastern oyster (Crassostrea virginica) and hooked mussel (Ischadium recurvum) restoration effort in Chesapeake Bay has been credited to the “complex architectural design of a concrete modular reef” and its location. 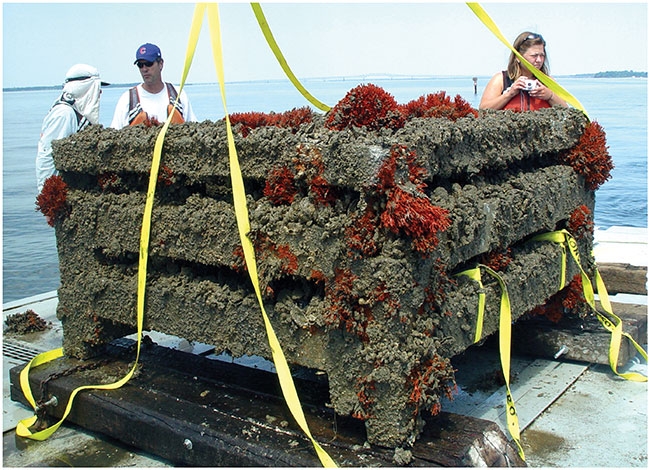 Top three modules of the modular reef that were sampled and immediately returned to the same location. From left: Captain R. Jensen

Made of rebar-reinforced concrete, the artificial reef was composed of five modules stacked on each other. Each module had a total surface area of 75 square meters. It was designed by Ret. Capt. Robert Jensen with the intention of providing suitable substrate of eastern oyster in a high-flow, low-siltation habitat.

“This modular reef is one of the most successful artificial reefs for eastern oyster and hooked mussel restoration, and details features that are conducive for successful settlement, growth and survival in subtidal habitats,” said authors Romuald N. Lipcius and Russell P. Burke, who are affiliated with the Virginia Institute of Marine Science, College of William & Mary.

It was deployed subtidally at a seven-meter depth near the mouth of the Rappahannock River, a western-shore tributary of Chesapeake Bay, where strong currents delivered food and larvae.

“The key findings of our study, which we believe is one of the most thorough evaluations of subtidal artificial oyster reefs, relate to reef features that are most conducive for successful settlement, growth and survival of the eastern oyster and hooked mussel in subtidal habitats,” the authors cited.

The five-year study documented “density, abundance, biomass and size structure of the eastern oyster and hooked mussel as a function of various features of the artificial reef, which can serve as a model for the use, performance and monitoring of artificial reefs in restoration efforts.”

The densities translated to 1,085 oysters and 8,617 mussels per square meter river bottom, which researchers said are the highest recorded for artificial oyster reefs.

Size structure of oysters reflected four year classes. About 40 percent of the oysters were spats and the remaining were reproductive age.

The study was completed in May 2005. A research article was published in October 2018 in PLOS ONE.

The densities were also comparable to or higher than those on natural, unharvested subtidal reefs in Louisiana and Texas.

The modular reef’s design proved an “extremely effective structure” for restoring eastern oyster and hooked mussel populations because it “provided suitable habitat for another suspension-feeding bivalve, thereby augmenting ecosystem services of the reef.”

More on the density, they said, “We also suggest that mussel density was highest on the top face, not only due to the strong currents, but also due to the protection afforded by crevices within oyster clusters.”