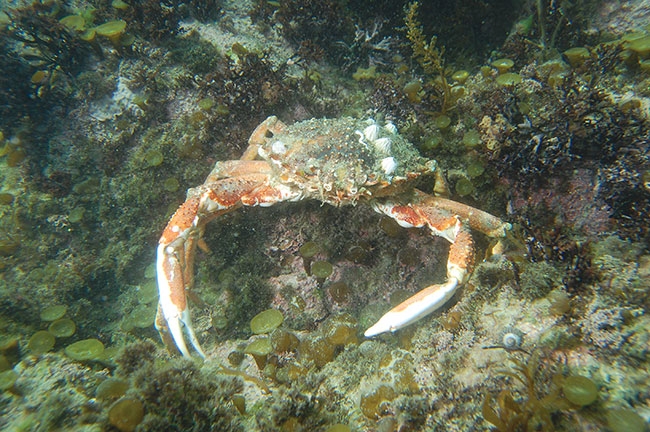 This was one of the results of a series of experiments, conducted in Spain, that manipulated temperature and light conditions with the aim of optimizing larval production of the common spider crab (Maja brachydactyla Balss, 1922).

“Temperature and light are important factors affecting production in the aquaculture industry, as they can drive behavior and physiological responses of free‐swimming larval stages. However, the influence of light on crustacean farming has received little consideration,” said Castejon et al in Influence of temperature and light regime on the larval development of the common spider crab Maja brachydactyla Balss, 1922 (Brachyura: Majidae).

The common spider crab, the authors said, has a great potential for aquaculture because of the easy maintenance, high fecundity, and short larval development.

It is an important marine resource in France, Ireland, Channel Islands and Spain.

“We optimized the larval culture of M. brachydactyla requiring around 14 days from hatch to first juvenile by keeping cultures under 21 ± 1°C and light sources simulating the daily light cycle,” the authors said.

Previous studies cited an average of 31 days to complete the larval development was at 14 to 17°C.

It was established that constant darkness had detrimental effect on developmental time and biomass.

It was established the optimal temperature for rearing larvae of M. brachydactyla at ~21°C and temperature shows stronger influence than light over the larval development.

“It is recommended to maintain a light-dark regime since, in the presence of light, the duration of the megalopa stage is shortened. The maintenance of a light-dark cycle regime was also recommended for the larval culture of other brachyuran species,” they cited.