Debates and good-natured arguments are a normal part of family dinners at the Mallet home in New Brunswick, Canada. Even as a child, Martin Mallet recalls family dinners as affairs where conversations were greatly encouraged. His father, André, has a PhD in Marine Biology so it is not surprising that Martin would end up as a scientist as well. 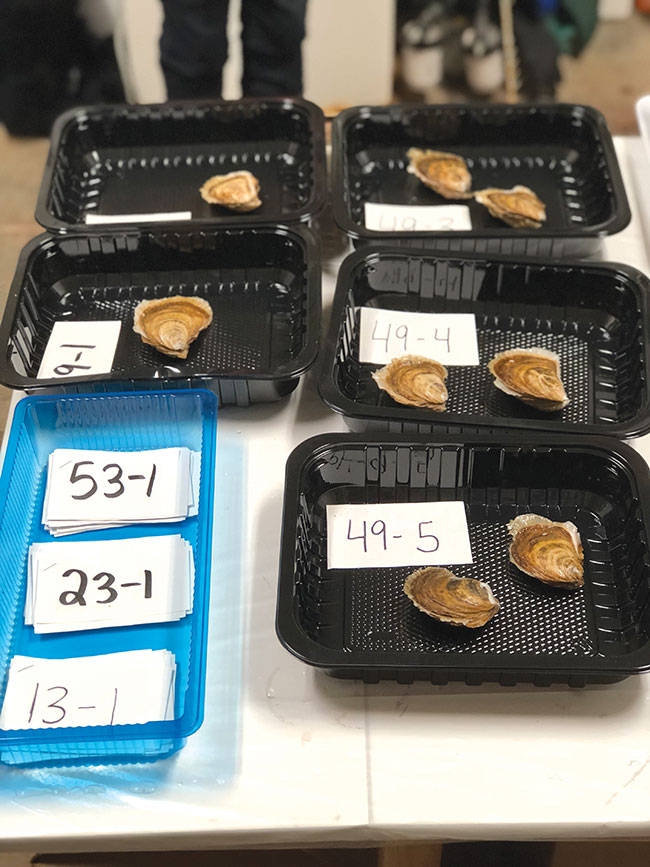 Oyster broodstock being sorted for breeding.

The Mallet family is behind L’Étang Ruisseau Bar, an oyster hatchery and farmer of oysters and bay scallops. “Science and arguments were always a big part of our family culture. So I knew I wanted to be in science and biology but it was never my plan to go into the oyster business,” Mallet tells Hatchery International.

While he ended up as an evolutionary biologist (his PhD thesis examined sexual selection in fruit flies), Mallet eventually made his way back to the family business. He assumed the role of hatchery manager in 2016.

“With the hatchery, there were really interesting opportunities research-wise. It is an interesting experimental system and provides a way to do research outside of academia. Having those two aspects and the ability to be hands-on, independent and do science really appealed to me.”

Humble beginnings
The family’s journey into oyster aquaculture arose out of their love for the juicy, meaty bivalve. Mallet’s father André and his grandfather Livain began oyster farming in the early 70s. To describe the farm’s beginnings as rudimentary is an understatement: they collected oyster seed from wild on scallop shells and transferred them to their leases where they would mature. The limitations of collecting seed commercially on scallop shells prompted Livain to travel to France to purchase the Chinese Hat seed collector, earning them a place in New Brunswick aquaculture history for introducing what was then considered a cutting-edge tool in oyster farming.

André took the helm at L’Étang Ruisseau in 1996, after he and his siblings bought the farm from their father. “Then they really decided to go into it more seriously,” says the younger Mallet. They started producing their own seed from the hatchery in 2009.

The hatchery and farm are near the town of Shippagan, located at the northeastern point of New Brunswick. “We are located in Saint Simon Bay which, if you make a list of things where you don’t want to put a hatchery, that’s the place!” Mallet says, laughing.

“Normally you want stable ocean water, but the coastal bay where we operate has a lot of inputs causing an unstable water column. There’s also a risk of ice movement due to the fact that much of the bay is extremely shallow. We deal with water that can have a really high turbidity at times under high winds, with large daily pH fluctuations, and where the salinity can fluctuate quite a bit, especially at spring thaw.”

This winter when much of Canada experienced unusually heavy snow, the hatchery got snowed in. “We were lucky we actually didn’t lose power. It was a matter of me having to shovel the snow to get in and out of the hatchery. I actually live on the same street as the hatchery so I’ve had days where I had to snowshoe to go to work,” Mallet says.

He adds: “We’re also lucky we’re working with the Eastern oyster (Crassostrea virginica) instead of fish for example, because oysters are capable of slowing down their metabolism and the juveniles appear to be more resistant to anoxia and other stressors. But for both the oysters and for us, it is an extreme environment.”

That kind of environment impacts the way things are done at the hatchery. Commercial hatchery season begins in the middle of winter, when the water temperature is around -1°C. “It has to be heated up to summer temperatures, so our energy costs are high. It can also take more than four years for oysters to reach market size and that’s easily double the time that it takes in the States. That’s another thing about operating in this general climate never mind the specific site,” Mallet explains.

One then wonders why that site was chosen. It was a leap of faith, says Mallet. “There was a government hatchery operating in Shippagan, close to the commercial port and they’ve had a number of production problems over the years. We weren’t sure whether it was a water-quality issue so using the same water source was quite a gamble.

“When the hatchery was first built, we didn’t know whether it was going to work or not. It was about building something that was functional but at the lowest cost possible in terms of the building. However, food supply being a recurring issue in all hatcheries, we did install eight photobioreactors to produce quality algae for the operation.”

“It’s hard to overstate the importance of that for us,” he continues. “We use the photobioreactors to produce algae that nourish the oyster seed. And especially where we operate, we can’t rely on algae available in the water. There’s essentially none in the wild at this time of the year. We have to grow our seeds to a larger size on algae that we grow. Other hatcheries in warmer water temperatures can move the hatchery seed to a field nursery much earlier in the season.”

It isn’t all bad news though. “Folks say the further north you go, the colder the water and the better the oysters are. And we’re as far north as you can go for the Eastern oyster. But we let our customers decide about the quality of our oysters. We can produce a small oyster that still has a very thick shell and that is very full and good. It still takes us a few years to get them to the two-and-a-half inch cocktail size.”

When asked what might account for the hatchery’s success, Mallet says there’s no magic bullet. “A successful hatchery has to be successful on a consistent basis. It’s really a thousand little things rather than one big thing: if you can work around almost any situation, and you pay attention to detail and make sure that your protocols are followed so that you’re able to replicate your success. I think it is really a kind of a mindset more than anything else and just this determination to figure out what’s wrong and correct it.”

Oyster broodstock being sorted for breeding.

From strength to strength
In 2016, the company had the opportunity to embark on a significant expansion, thanks to funding from the federal and provincial governments. “We expanded our land-based field nursery system in order to increase seed production capacity. Going back to the origin of the company, back in 1973, a coastal pond was fitted with a gate allowing control of the water exchange and volume being retained in the pond. High food levels and warmer waters sooner in the year provided the ideal spot to build the land-based nursery system and transition the small hatchery seed sooner to the field and provide more space in the hatchery.”

Another expansion will begin this summer to boost the hatchery’s capacity to 100 million seeds from the current 50 million. “We’ll have the space for next season and will probably be gradually moving up to that 100-million mark over the next three years or so. It partly depends on market demand,” he says.

More advanced heat-recovery systems will also be installed as part of the project “now that we know that it’s a worthwhile investment,” he says.

Another development in the works is a breeding program, which is partly funded by the company and a Genome Canada grant. “As an evolutionary biologist I’ve been laying the groundwork since 2013 to lead into a full-fledged breeding program. That’s been quite successful and we’re moving now into a large private and academic collaboration that will bring genomic tools to Eastern oyster breeding.”

As a hatchery operator and farmer, L’Étang Ruisseau is able to offer clients husbandry advice such as the right culture densities or how to handle their product. “Hatchery seed is a little bit different than wild seed. It’s not the same handling as wild seed. We’re basically lavishing attention and care on hatchery seed from birth and they do get into the water earlier. Since we’re spawning in the winter we get that full first season of growth therefore shortening the production cycle.”

Outlook
Over the past five years, the industry has become more professional, Mallet observes.  “Growers are less willing to take a chance on having a variable seed set. They want the ability to buy seed at a predictable cost. That does increase the demand for hatchery seed. We’ve seen a steady increase in the demand in the last five years.”

In his estimation, the hatchery accounts for roughly 90 percent of the hatchery business in New Brunswick. “On a world scale, we’re tiny, but our industry is tiny,” he says.

The industry is growing, however. New Brunswick’s new shellfish aquaculture development strategy aims to grow the industry by 10 percent annually, which means 30 million oysters, $12 million in farm gate sales, and $6.4 million in exports by the end of 2021. Latest sales figures available show the industry sold 23 million units in 2016 at farm gate value of $9.1 million.

“I think that the growth is going to end up being quite a bit higher than the target,” he says. “I think the industry will exceed those expectations. Maybe rather than producing 30 million pieces per year by 2021, I wouldn’t be surprised if we would end up closer to 35 million.”