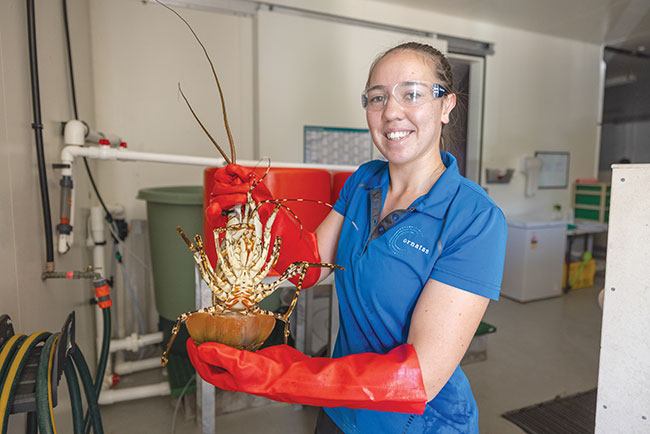 Considered a premium species around the world, Australian Tropical rock lobster (Panulirus ornatus) is supplied from a wild fishery in northern Queensland that is sustainably managed by the Australian Government. But despite the species’ high value, their long and complex lifecycle had made it impossible to culture them on a commercial scale.

That is, until now. Ornatas, a Tasmanian aquaculture firm, is investing AU$25 million (US$19.4 million) to develop a commercial industry for sustainable Tropical rock lobster production based on research by the University of Tasmania (UTAS). A commercial partner for the UTAS Institute for Marine and Antarctic Studies (IMAS) for over four years, Ornatas has a fully operational hatchery in northern Queensland and is working with commercial partners on land-based systems in Townsville and sea raft grow-out in Broome, Western Australia, to create a premium, sustainable product.

The company began construction of its pilot hatchery in mid 2020 before it was commissioned in December of that year under exclusive licence conditions by UTAS. The first larval run was completed in May 2021 when the larvae will metamorphose into puerulus before they moult into juveniles in June. The main 20-tank hatchery capable of producing 300,000 pueruli per year will be commissioned in July 2021.

“Our goal is to complement the wild fishery in northern Queensland and produce a sustainable product from egg to plate on land and sea raft systems in pristine areas of far north Australia,” says Scott Parkinson, chief executive of Ornatas. “Our current hatchery and grow-out operations have the capacity to produce 150 tons of premium 1.2-kg Tropical rock lobsters, and this is to be achieved within the next three to five years. Development plans are underway for a larger facility to support an industry of 1,100 tons annually for onshore and sea raft systems.”

Optimal growing conditions
The hatchery is located 40 km from the central business dsitrict of Townsville on Toomulla Beach. Its broodstock are either F1 domesticated stock from UTAS or wild-caught from the Great Barrier Reef under strict permit conditions. Four tanks representing the four seasons of the year provide a year-round supply of larvae. Specific male-to-female ratios are in place with approximately ten broodstock in each tank. The lobsters are given fresh feed and a specific manufactured feed that has been developed by research partners at UTAS. They are held in RAS systems where all water quality parameters are controlled. Depending on their spawning cycle, each group is also temperature and photoperiod-controlled, while water quality must meet very high standards that are equivalent to the water on the Great Barrier Reef.

“Our system is fully controlled but one of the biggest risks to a hatchery is the introduction of wild broodstock so in order to manage their introduction, we have quarantine facilities that are separate from our hatchery operations,” says Parkinson. “The lobsters will spend up to six months in this area and meet strict biosecurity standards before they can enter our hatchery and become part of our domestication program.” 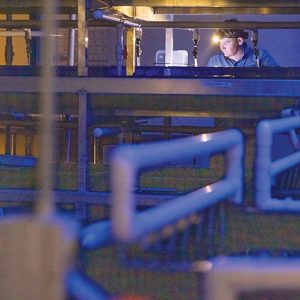 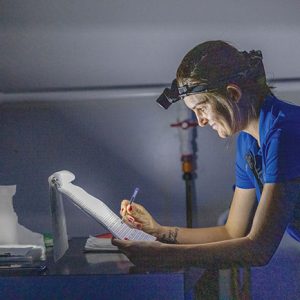 Broodstock to larvae
Female broodstock are held in their summer cycle. When they reach around 1.2 to 2 kg, they will mate with a male of a slightly larger size and incubate fertilized eggs. These will take 28 days to develop with hatching occurring at night. When held in a summer cycle, females tend to spawn each month, around three to four times, with a 2-kg female producing an average of 1,000,000 phyllosoma. Fifty per cent of the hatched larvae will be grown in specifically engineered tanks and RAS systems based on research conducted by UTAS. The larvae will be given a specially formulated diet to maximize production, while all systems will be controlled by Oxyguard control systems. Raw water will be managed using pre-filtration methods such as screen filters, sand and foam fractionation.

“We’re looking to mimic the ocean environment in our culture vessel as much as possible and the capacity to do this is part of the IP (intellectual property) we are using,” says Anna Overweter, Ornatas hatchery manager. “In general terms, we have very stable systems and specifically manage specific water chemistry parameters. Temperature, pH, salinity and biological controls are all part of our systems.”

Larvae tanks are also operated off large RAS plants with IP-protected technology, giving Ornatas the advantage of being the only commercial spiny lobster producers in the world.

Juvenile rearing preparation
Juvenile rearing is due to begin in April 2021. Stocking density will be key during this stage to avoid cannibalism and harm caused by aggression, says Overweter.

“Fortunately we are lucky because as the lobsters get older they become more interested in our feed rather than eating each other,” she says. “Early rearing is a challenge which we continue to work through and UTAS is working on specific tank design to overcome cannibalism. I’m hoping that in a couple of years, we’ll be able to showcase new tank technology addressing this issue.”

New feeds are being developed by Ornatas and UTAS research teams and will be manufactured in-house during the early commercialization stage. Ornatas is also talking to a number of feed manufacturing firms in Australia about the commercialization of these formulated feeds over the coming year. The premium market size for a Tropical rock lobster is 1.2 kg. It is believed that it will take 24 months from egg to market.

In the meantime, with strict biosecurity measures in place, critical attention will be paid to controlling all water quality parameters in onshore systems and assessing lobster growth in sea raft systems for comparison, says Parkinson.

“Our farm is being designed and operated as a biosecure facility and the hatchery and nursery facilities are operated at the highest standard,” he says. “I have worked in the oyster industry in Australia while it was impacted by Pacific Oyster Mortality Syndrome and understand the impact of not operating under strict biosecurity protocols. Disease incursion can be catastrophic and put your business at risk of collapse.” 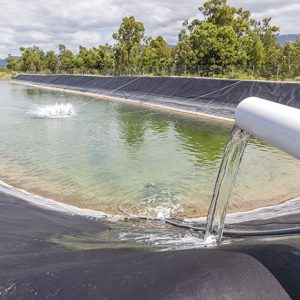 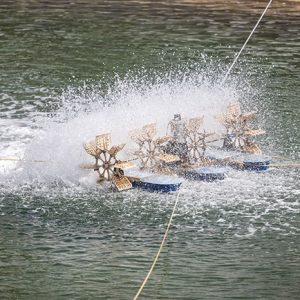 Challenges, exports, benefits
Thanks to 20 years of research by UTAS, it’s now possible for Tropical rock lobster to be reared in hatcheries, but commercialization is another significant step, says Overweter. A typical larvae run will last for 140 days and each day brings dangers from equipment failure, water quality issues, cyclones, bacterial contamination, feed quality and more, she says, but through diligent staff, biosecurity, strict standard operating procedures and good science, progress is being made.

Having a variety of export destinations is also key for Ornatas. Currently the lobsters are set for markets including Australian premium restaurants as well as China, Southeast Asia and the USA. But interest from the UAE and Europe is strong, and it’s clear that whole, sustainably-produced premium Australian seafood is a sought-after product. Ornatas is hoping to make the most of this opportunity amidst the high costs that are incurred from producing lobsters in a hatchery.

A new lobster aquaculture industry to supply export markets is great news for northern Australia. New knowledge and business models, jobs and opportunities are among the many benefits Ornatas’s hatchery can bring, not just to the entire state of Queensland but also to local communities in northern Australia.

“We have invested over AU$12 million (US$9.3 million) over the past 12 months, and we prioritize all local contractors and suppliers to ensure that most of this investment is returned to the local community,” says Parkinson. “We currently have 20 staff. The majority is from Townsville and trained at James Cook University, Bebegu Yumba (Townsville) campus.”

Bright future
Feedback on the Ornatas hatchery has been positive, with both the commercial and research sectors keen to get involved. Spiny lobster farming is also considered the holy grail of aquaculture and Ornatas is leading this charge for commercialization with the Tropical rock lobster species, says Parkinson.

“We are waiting with anticipation for the first production runs to be completed so we can start farming lobster commercially for the first time in Australia,” he says. “2021 will see four years of extremely hard work come to fruition for Ornatas and many of our staff who have been working tirelessly to achieve this outcome.”

Overweter and Dr. Jennifer Blair of Ornatas’ R&D program are excited to achieve full hatchery production by the end of 2021.

“It is very impressive to see so much of the research that I was a part of at UTAS being upscaled, commercialized and improved upon to make Tropical rock lobster from egg to plate a reality,” says Overweter. “Where we have got to in the last four months is nothing short of phenomenal. The team has been brilliant in commercializing the critical techniques for lobster rearing, feed manufacturing, water quality and systems management. These are systems and techniques that are unique to lobster hatchery rearing and can only be taught onsite. It’s a credit to the team to have got to where we are so rapidly and seeing success in our hatchery production on our first run.”

“Looking into the larval tanks is like a combination of an Alice in Wonderland and sci-fi experience,” says Blair. “The biology of these phyllosoma is amazing and the Ornatas hatchery team have done an incredible job to bring this to commercial reality. I look forward to supporting the company research that will underpin the next business development stages and the grow-out of premium lobsters for market.”