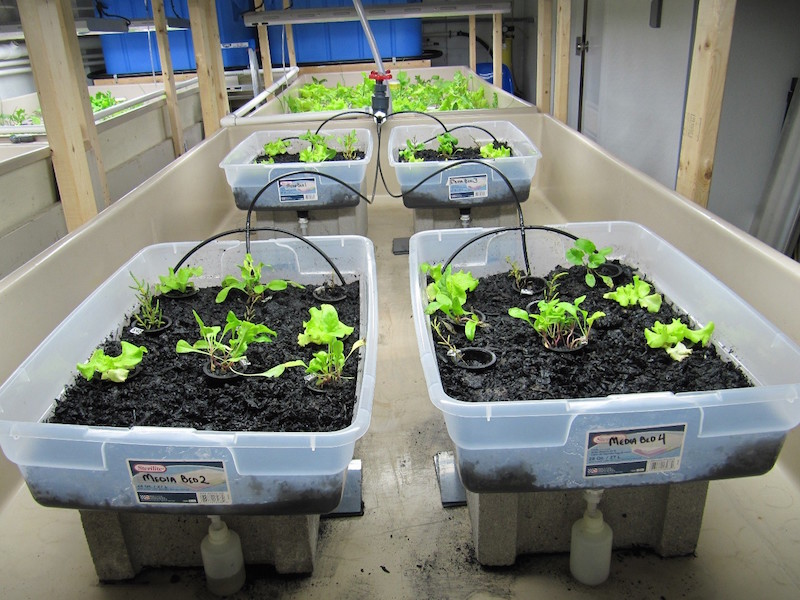 At the University of New Brunswick in Canada researchers have developed a pilot-scale aquaponics system with plants selected for their efficiency recapturing nutrients from salmon hatchery effluents - all on a unique substrate.

In many aquaponic systems it is common to use a substrate such as foam, coconut coir, rock-wool or expanded clay for seedling production and plant support. However, these substrates are often not reusable and may not be produced locally. Efforts to gain environmental sustainability can be overshadowed by the sourcing footprint of such materials.

Being involved in the development of marine integrated multi-trophic aquaculture systems (MIMTA) over the last 15 years, we have also acquired experience in growing seaweeds as the inorganic nutrient extractive component of these systems at sea.

And since we want to diversify the uses to which the harvested algal biomass can be put, we have worked with seaweeds for human consumption (e.g. food items and micro-brewed beer) for cosmetics, and for animal feed (partial substitution of fishmeal in feed formulations). Our kelps have also gained organic certification.

We thought that another application for some of this algal crop could be to transform it into biochar for use as a plant substrate in our aquaponics operation.

Biochar is a stable form of carbon produced by the pyrolysis at high temperatures (400-500°C) of forest – or agriculture-derived biomass residues in a low – or no-oxygen environment. Biochars are stable in wet environments, provide pH stability and their long-term carbon sequestration can potentially reduce the impacts of climate change. It, therefore, made sense to test whether IMTA kelps could be turned into biochar of appropriate quality to become the locally-produced plant substrate for our pilot-scale aquaponics system.

Biochars differ based on feedstock and production methods, so kelp biochar was tested for its usability in seedling production and in two common aquaponic plant-growing systems: the floating raft and the media-filled bed.

For seedling production, seeds of a variety of plants were placed in net pots along with the kelp biochar. High rates of successful germination occurred when the kelp biochar was rinsed initially with freshwater approximately six times to remove salts. The seedlings and their net pots were then placed in both the floating raft and the media-filled grow beds.

The floating raft beds consist of Styrofoam sheets that float on top of the nutrient-rich fish effluent from which the plants absorb nutrients through their roots. The media-filled beds consist of a substrate (biochar) being placed in grow beds through which the effluent is trickled.

Our results showed that the kelp biochar worked well as a substrate in the floating raft system. However, in the media-filled beds, the biochar’s high water holding capacity caused stunted growth and low survival.

By applying the same principles of using organisms with complementary functions in the ecosystem, nutrient recovery and product diversification, the IMTA concept can be implemented from the freshwater hatchery to the marine operation at sea – all the way from egg to the plate! This will be important, not only from a branding perspective, but also for the environmental sustainability, economic stability and increased societal acceptability of the aquaculture industry.

Moreover, using IMTA-produced kelps as a locally-produced and renewable resource in the aquaponics system would develop another interesting loop in the approach to recycling, which is closely linked to the overall IMTA concept.

Thierry Chopin is the Scientific Director of the Canadian Integrated Multi-Trophic Aquaculture Network (IMTA). He is based at the University of New Brunswick in Saint John, Canada. Stacy Murray is one of his graduate students.