As climate change and general concerns about the environmental impact of mass food production facilities increase, the aquaculture industry is looking inward and to scientific advances to improve operations, fish health and guarantee future growth.

Hatcheries located within regions severely affected by climate change could face issues concerning flooding or lack of consistent groundwater sources. Those in more stable areas will be able to rely on technology and new advances in operations to keep things stable.

Water treatment systems for hatcheries must be designed to provide consistent water quality year-round, despite wide seasonal variations. Chamberlain says there’s often a tendency to develop facilities for the typical or average conditions, but this leads to variations in water quality and reduced hatchery performance during seasonal extremes.

In another example, coastal hatcheries in India and South Asia can expect seasonal monsoon conditions with high winds and heavy rains. During this season, coastal waters will be impacted by reduced temperature and salinity and significantly increased turbidity from suspended sediments.

“To minimize these variations, water intake pipelines should be deep enough to capture high salinity water; reservoirs, sedimentation, and filtration systems must be scaled to eliminate monsoon turbidity; and temperature controls must be designed for such cooler conditions,” says Chamberlain.

Overtime, Chamberlain says there will be a trend toward installing systems that provide greater control and consistency. 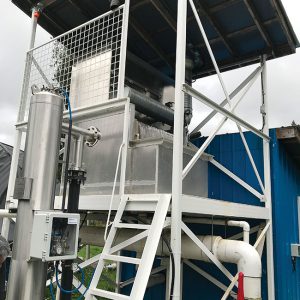 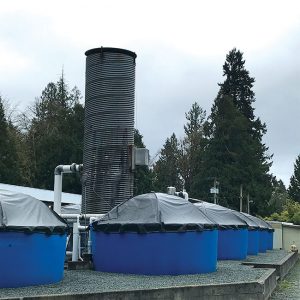 The rise of RAS
To make better use of resources and maintain controls, hatcheries are increasingly implementing technologies that reuse water. George Nardi, vice-president of aquaculture services at Innovasea Systems Inc., says incorporating recirculating technology into operations addresses other concerns brought on by global warming. Before joining Innovasea, Nardi was the founder of Great Bay Aquaculture, a hatchery in Portsmouth, New Hampshire.

“Climate change affects temperature and pH in coastal waters, and RAS allows further control of those conditions so you can produce a warm water species year-round in a temperate environment or vice versa. With RAS, you can afford to control temperature and have control over pH, and ammonia is directly related to the level of pH in the culture tank. Hence, controlling pH is important in hatchery or nursery operations,” says Nardi.

Åse Åtland, research director at the Norwegian Institute for Water Research in Norway, says RAS is the way the industry is going in Norway and Chile with a focus on taking in as little new water as possible.

“I would generally say recirculation farms using groundwater are the most robust way to deal with climate change challenges,” she says. “Water quality is surely a critical factor, but if it is not suitable, it’s not so much due to climate change but often based on groundwater and the local geology. The limiting factor is very often toxic metals and a natural phenomenon.”

“With salmon, how climate would change water quality is dependent on the technology the hatcheries are operating on. The RAS systems take in very little new water and are much more robust in terms of climate change effects because you can more easily treat the incoming water. And since you take in so little water, you won’t see the fluctuations.”

Åtland says water quality in Norway is improving, but they are seeing more browning of water due to higher humic content. That’s an issue for the salmon hatcheries as the higher the humic content, the more complicated it is to have UV disinfection.

Impact of feeding
How fish are fed also impacts water quality. This is recognized as enough of an issue that major feed companies are designing feeds for RAS systems to minimize the adverse effects on water quality.

“If you feed once or twice a day, you can imagine the impact on the water quality and what your system has to deal with and recover from, only to get hammered again six hours later. But if you feed every other hour, that influence is flattened out so that your system and water quality is more consistent and is not affected by temporary pH and ammonia effects in the water,” Nardi explains. 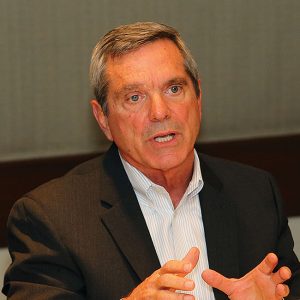 The trend will move toward installing systems that provide greater control and consistency, says Chamberlain.

Monitoring and control
Today’s hatcheries are relatively intensive operations with hundreds of thousands of fish in the tanks, which means monitoring is critical.

“I can tell you from experience it only takes an hour or two to lose all of that if things aren’t properly monitored and controlled,” says Nardi.

As monitoring becomes more sophisticated, operators have to be properly trained.

“Back in the day, I would have to have an on-site technician 24 hours a day – there was too much at risk if, through monitoring, I couldn’t make an adjustment within minutes,” he says.

“You can see what’s happening from your kitchen table rather than being there at 2 a.m.,” he says.

Oxygen and gas management
Nardi says Innovasea is working to develop efficiencies that improve production, especially gas management, which he says is “the unseen danger” – primarily nitrogen and CO2.

“What we see in the hatchery world is a lot of tried-and-true technology,” he says. “We see some new, but we also want to improve upon what’s there – can we make it lower cost, more efficient and improve productivity?”

The U.S. Fish and Wildlife Service announced in May 2020 that it is installing Moleaer Inc.’s Neo nanobubble generator to improve water quality at the Garrison Dam National Fish Hatchery in North Dakota. The nanobubble generator will increase the dissolved oxygen levels and water quality by reducing nitrogen levels and suppressing waterborne pathogens. The hatchery started with a system that covered two raceways and has purchased more to do a proper retrofit of the whole facility.

“Aquaculture is one of our newer markets, but it is a fairly seamless extension of what we have been doing in horticulture,” says Warren Russell, co-founder and chief commercial officer of California-based Moleaer Inc., adding the nanobubble generator can be applied to a range of operation sizes.

“We have some customers doing aquaponics in 5,000-gallon tanks and some large salmon hatcheries doing millions of gallons a day,” he says.

One of the critical parts of aquaculture is how to get oxygen into an ideal rearing environment and consequently reduce operational costs.

“We started down this track by force of circumstance in Chile in the salmon industry where most of the hatcheries are either using oxygen cones or diffusers as their principal method of oxygenation,” says Russell. “In those cases, we are looking at retrofitting existing conventional aeration or oxygenation equipment. The sole purpose is reducing operational costs.”

Where Russell sees the most potential for nanobubbles related to salmon is optimizing the oxygen mixing system in sea lice prevention.

“The evidence to date based on various trials in Canada, Norway and Chile is that we are demonstrating not only can we provide a more optimal rearing environment, but we can reduce the operations costs too,” he says.