The U.S. state of Wyoming’s Game and Fish Department has released 6,000 channel catfish into 19 community fishing ponds across the state. 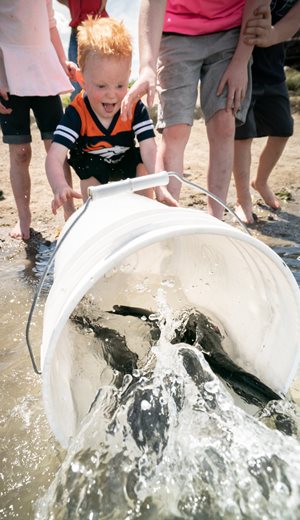 In a press release, the department said the fish stocked were considered “jumbo-sized” ranging between 13 and 14 inches in size.

The catfish come from the Wyoming Women’s Center in Lusk from their in-house aquaculture program. It is the first time Game and Fish has worked with the Women’s Center aquaculture facility to raise and provide fish for the state, and the collaboration has benefits for anglers, the agency said.

“Game and Fish doesn’t have a cool and warm water fish hatchery – our fish culture facilities are primarily supplied by colder water sources which make them great for raising trout,” said Guy Campbell, the department’s fish culture supervisor. “With the Women’s Center, there was a unique opportunity for them to raise a warm water fish to benefit anglers.”

Typically, cool and warm water fish, such as catfish, stocked in Wyoming are acquired by fish trades with other states. Campbell said the catfish acquired from the Women’s Center were much larger than the typical stocking size.