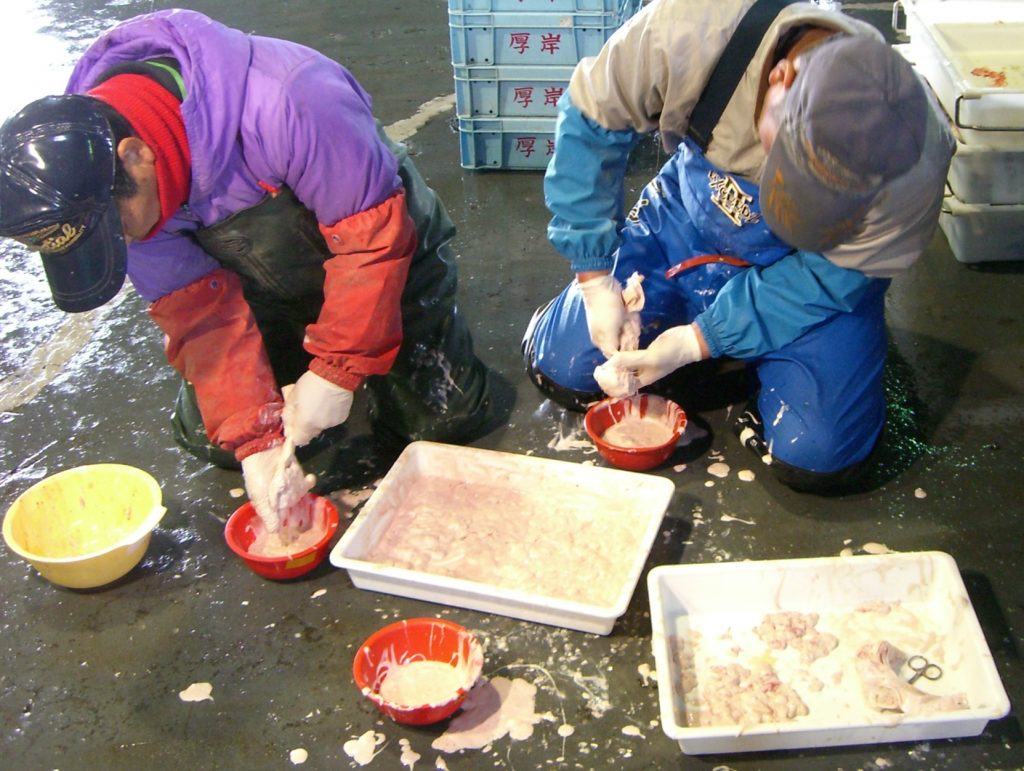 In 1982 efforts began in Hokkaido, Japan to develop a herring nursery production program for resource enhancement. The program was managed by the Japan Aquaculture Association. Successful, current techniques produce one million or more herring with a 40% survival rate for release, and have contributed greatly to adult harvests since the onset of the program.

The process of enhancement is a multi-level, carefully controlled process- starting with collecting eggs and sperm from fresh fish caught commercially, ensuring that offspring will come from a genetically diverse “wild caught” population.

The fertilized eggs are then incubated at controlled temperatures that average 10C (75% success) and hatching is completed at 150 days. In the hatchery filtered sea water is exchanged every 24 hours for incubation, and the eggs are aerated using a high water flow, and disinfected with iodophore.

Then, just before hatching, the eggs are moved to culture tanks, where the temperature is gradually raised to 13C. Filtered aerated seawater is used, and shading and green water help diffuse the light from the facility. Once hatched, chlorella is added to the water to provide a color contrast for food and feeding.

Feeding after hatching consists of rotifers from day 1-15, Artemia from day 10-45, and formula feed to put on weight from day 20 until release, up to about six months of age.

When fry reach handling size at around day 60 they are transferred to net pens and acclimated to the natural environment. Feeding here is a commercial diet similar to salmon feed,  but natural foods foraged from the environment become an important part of the diet – often copepods, polychaetes, and crustacean larvae. Despite the adequate amounts of commercial food, at some pen sites the natural foods can make up to 56% of the herring fry diet.

To identify, monitor, and survey hatchery herring from wild-born fish the herrings’ otoliths are marked before release using fluorescent labeling which is added to their food. This identification can then be used to monitor and survey herring populations to determine hatchery survival success.

Currently the Japanese have identified five main causes of mortality for their program:  the source of eggs; vulnerability of specific development stages; failure to transition to new feed; inadequate nutrition; toxicity of Alizarin (ALC) complexone labeling treatment for otolith marking.

But overall the enhancement program has been a success, steadily climbing from 1,366 tons of fish caught in Japan in 2002 to an estimated 4,500 tons in 2013.

Certainly enough of a success to catch the attention of researchers in Alaska facing their own dramatic decline of a once prolific fish.

Why they do it…

To understand why the Japanese would want to start an aquaculture program for a tiny fish like herring you have to first understand the history and culture of that dynamic country.

Herring has been culturally and economically important in Japan for centuries. According to Toyomitsu Horii of the Agriculture, Forestry and Fisheries Research Council, “Herring was one of the main fishery products, especially in northern Japan. Dried herring was a very important fish protein centuries ago, and we still have various old fashioned herring cuisine everywhere.”

Dr. Shingo Hamada, Project Researcher at the Research Institute for Humanity and Nature in Kyoto points out that, “Herring played significant roles in the development of Japan as a nation state in her history. Herring fishmeal fertilizer contributed to the development of agriculture in mainland Japan in the eighteenth to late nineteenth century. When abundant, fishermen caught large amounts of herring, which brought both economic capital and ‘cultural capital’ to fishermen.  Culturally it has been important to Japanese fishers to show their quality of fishing skills in their communities.”

The use of herring roe (kazunoko) has also been culturally important as a traditional part of Japanese New Year’s Day “osechi cuisine”, symbolizing fertility: many eggs = many children. This has been the driver for much of the export herring fisheries in the Pacific Northwest region of North America.

In 1876 the Japanese herring fishery opened to market and in 1897 they recorded their largest herring harvest ever. But by 1958 the herring fisheries had collapsed owing to overfishing, habitat destruction and oceanic environmental changes that caused a regime shift in forage fish.