Red sea bream (Pagrus major) has been eaten in Japan for at least 5,000 years. It's featured prominently in festive occasions because the Japanese word for the species, madai, sounds like medetai, meaning auspicious or joyous. It's also an important species for Japan's commercial aquaculture sector. Its fast growth rate and ability to spawn naturally in captivity makes it economically advantageous and particularly attractive. 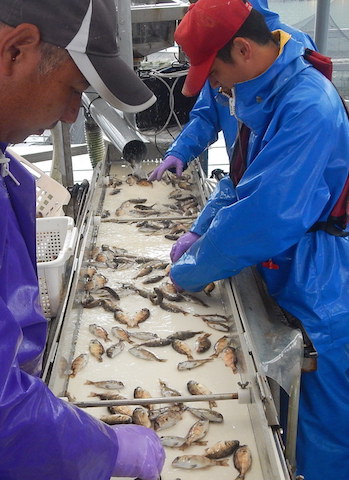 For 35 years a marine hatchery on Japan’s Shikoku Island has been producing red sea bream juveniles for deep-water growout in local waters.

One company that’s been reaping the benefits of red sea bream is Dainichi Corporation on the island of Shikoku, southwest Japan. Since its establishment in 1982, it’s been specialising in deep sea farming – the rearing of red sea bream at depths of 40 to 50m, with a nearby hatchery called Yamasaki Giken Co., Ltd supplying juveniles for growout. Although Yamasaki Giken began as a machine manufacturer, its founder’s interest in the environment sent it moving in a totally new direction.

“Our founder is extremely interested in the severity of declining fish stocks,” explained Sachi Morita of Yamasaki Giken’s Research and Development division. “He decided to open a hatchery because he believed we should produce the fish we want to eat, not take from the wild.”

Yamasaki Giken sits on an area of 10,000m2 and faces Uranouchi Bay, an enclosed bay in the southern part of Shikoku. At 10.5km long, its morphological features suggest what’s known as a submergent coastline. The bay is low and narrow with small inlets that offer protection from high waves and strong winds.

Two round tanks, each containing up to 50 fish, are used to rear broodstock, and 22 holding tanks are used for larvae and fry. Rotifers are reared in 12 holding tanks, while artemia are incubated in four and grown in four.

Seawater for the tanks is drawn directly from the ocean, disinfected through ultraviolet sterilization and pumped into the holding tanks. Once purified, it’s returned to the ocean. Regular water checks are conducted in line with Japan’s Water Pollution Prevention Act and strict controls are in place for broodstock selection.

“We select our broodstock based on size and traits,” said Morita. “We tag them for identification, photograph them, and take a DNA sample. We make sure that they have a high level of genetic diversity and that inbreeding is avoided. We check that the fish are active with complete fins and scales and free from disease. This is key to sustainable production.”

The broodstock are put into holding tanks at the beginning of December. Water temperature and light are carefully controlled and in February and March their eggs are collected, transferred to separate tanks and divided into floating and sinking. Dead eggs that settle at the bottom are removed by siphoning, while the floating ones are transferred to rearing tanks until they hatch into larvae. Samples are also taken to check for the virus that causes Viral Nervous Necrosis (VNN) that typically affects the younger stages of fish.

After hatching, the condition and feed intake of the larvae are monitored daily. On the first day, they are minute at around 3mm and live on their yolk sac for the initial three days. By the fourth day, when their eyes and mouths become more prominent, the actual feeding begins. When they’re between 2 and 26 days old they are given rotifers, artemia at 14 to 29 days old, frozen copepods at 15 to 29 days and formulated feed from day 23 onwards.

“We control feeding, water temperature and dissolved oxygen using a computer, said Morita, “while an automated system rears rotifers and artemia, cleans them and distribut

es them to the tanks. When the larvae are around 40mm and have developed into fry capable of feeding themselves, the tanks start to become congested so they are moved to offshore cages.”

The fry are reared offshore until they’re around 70mm. They are then divided according to size into small, medium, large and extra large, and separated to allow more space to move around and reduce stress. When they’re around 80mm, they’re returned to the hatchery and checked for any deformities (those that cannot be delivered are removed) before being shipped out in line with orders received from Dainichi and other growout facilities.

The fry are delivered on boats or conventional light trucks containing open tanks for shorter distances or closed tanks for larger quantities and long distances. After delivery, a Yamasaki Giken staff member checks the fry and makes sure that any information that could be required in the next stage of production is shared. Biosecurity and disease prevention are key to a successful procedure.

“Our disease prevention measures are pretty thorough,” says Morita. “Staff must step into trays containing Glutaraldehyde before entering the tank areas. We have lost thousands of larvae to disease before, so we rigorously disinfect equipment, and if necessary, minimize frequent transfers to tanks.”

Any larvae or fry suspected of carrying disease are taken to Yamasaki Giken’s research laboratory for examination. Dissection, the isolation of bacteria and PCR diagnoses can identify any possible disease and contribute towards early detection and prevention. Those that have already been shipped can be returned if required, and feedback is provided that will be of use in the next production stage.

Morita believes that farmed fish will continue to be a key commodity.

“The demand for farmed fish is rising,” she said, “and there will be more sales, not just within Japan but also to the rest of the world. Security, safety and good product quality are vital, beginning at the hatchery stage. Our mission is to make our operations more transparent and work in line with the needs of today’s fish farmers.”