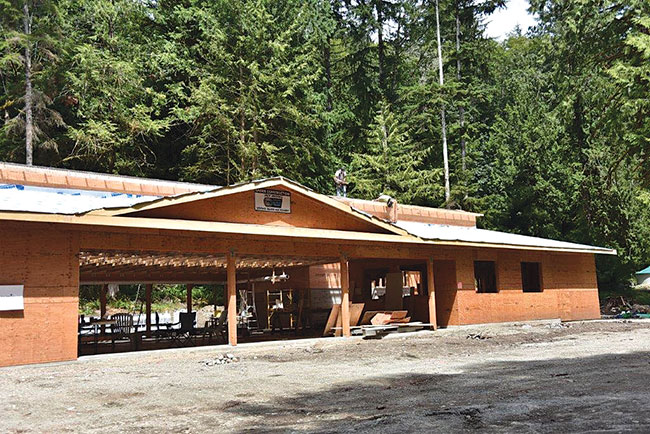 Most of the construction of the Jack Brooks Hatchery is complete, and the facility is on track to be ready for when chinook salmon make their way through the Sooke River in September.

The construction of the $1 million Jack Brooks Hatchery on the Charters River in British Columbia continues, with the main structure expected to be completed by press time. The hatchery is a result of a partnership between the Sooke Salmon Enhancement Society and the Juan De Fuca Salmon.

“We’re just in the process of pouring our last piece of the concrete slab,” said lead volunteer Wally Vowles. “We’ve had to plant six tanks in the ground before we could pour our last bit of concrete. The boys will be finished with the concrete slab now and I think probably 85 per cent of the plumbing for the hatchery itself is in place. The roof is on, the framing is done, we’ve got a membrane on the roof. It’s coming along well, we’re ahead of schedule.”

Vowles said the hatchery needs to be up and running by September, when the chinook will be coming up the Sooke River. The aim is to have tanks ready by that time to hold adults and then the incubation room ready when it’s time to take eggs.

There are only a few minor challenges remaining, Vowles said, including meeting a new B.C. provincial regulation on returning water to a stream or river, limiting parts per million of phosphorus. There are several potential ways to meet that regulation, including filtration or settling ponds, but the exact path forward has not yet been chosen.

There was some minor drama in May, when a Stop Work Order was issued because a building permit had not been issued due to missing documentation. Though the issue was quickly cleared up and the Stop Work Order lifted only a few days later, things became heated enough that Vowles himself briefly resigned from the project.

“I don’t like to say too much about it,” said Vowles. “It was an unfortunate incident, but it got taken care of and we never really did stop work. It carried on.”