Features
Investing in the future of feed

A look at Enterra’s road to mass production 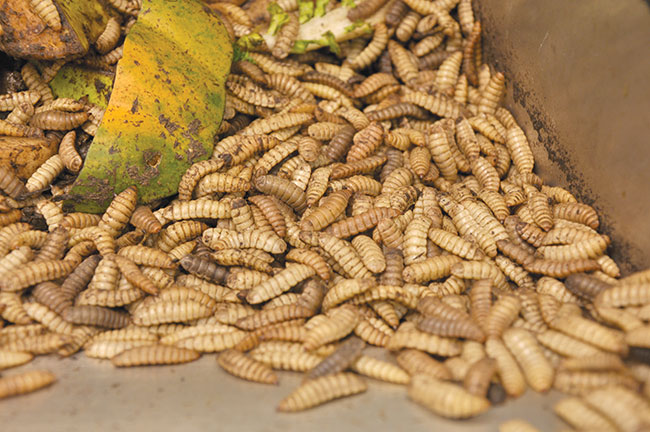 Insect feed production is estimated to increase from 10,000 tonnes to 500,000 tonnes by 2030, according to Rabobank. Photo: Enterra

What comes first, the fish or the egg?

When it comes to adopting protein alternatives for fish feed, Jason Mann says the aquaculture industry seems to be having a standoff.

Alternative feeds can be expensive and when the majority of a fish producer’s operational costs go towards the stock’s feed products, it’s a significant decision that directly affects a company’s price per ton. Another barrier to adopting alternative feeds is the large volume of feed that these companies require and the supply does not yet match the demand in the industry.

“It’s a chicken-and-egg thing of, well, it’s a little expensive and you don’t have enough supply so I’m not going to use any. That’s often what companies, like Enterra or other startups, are left with,” says Mann, who is the director of nutrition at Riverence Trout Farms in Buhl, Idaho.

“A company might think, ‘The (feed producers) are trying something and we always wanted to have alternative ingredients,’ but now if we’re not going to support that company, then we’re part of the problem. We’re not helping it.”

Mann has worked 29 years with EWOS, a Norwegian-based salmon feed producer. Mann is also an adjunct professor at the University of British Columbia, teaching fish nutrition to graduate students enrolled in the new Certificate of Aquaculture program.

Bug benefits
B.C.-based company Enterra is one of the feed producers that Mann partners with to build Riverence’s nutrition program. Enterra produces an insect protein meal and oil ingredient made from black soldier fly larvae. The company was co-founded in 2007 by renowned environmentalist, David Suzuki, with the vision of growing and processing dried black soldier fly larvae as a natural feed ingredient that will also minimize environmental impact.

These insects are considered a clean food source to cultivate because it mainly consumes compost food waste. At its larval stage, it can consume about twice its own bodyweight every day for its 18-day lifespan. Enterra harvests the larvae to then be dried and processed into a high-protein feed ingredient for aquaculture, poultry and pet food.

“If you look at the amino acid content, black soldier fly larvae provide a complete source of protein and they have all nine essential amino acids,” says Laura Metcalf, customer care manager at Enterra. She also holds a master’s degree in animal nutrition from the University of Guelph.

“Aside from that, there are multiple other health benefits that are, I’d say are non-nutritional, like probiotics for gut health and medium chain fatty acid for antibiotic qualities, compared to other sources of protein, like soy meal.”

Increased investments
Enterra currently diverts up to 130 tonnes of food waste per day to its new 170,000-sq.-ft. facility near Calgary, Alta. Because of this business model, the company was recognized by the Canadian government with a $6-million investment through the AgriInnovate program.

“Our government wants to reduce food waste and we are counting on our entrepreneurs to help us get there,” says Marie-Claude Bibeau, Canadian Minister of Agriculture and Agri-Food. “The Enterra model is very promising, and our investment will allow them to continue their launch.”

Enterra’s Calgary facility started its commission in January this year, which increased the company’s production capacity up to 25 times compared to its pilot production facility in Langley, B.C. By moving its production from B.C. to Alberta, the facility also gains more access to food waste systems for its insects’ feedstock.

“The biggest challenge is going from concept, to experiment, to a pilot facility, to a full commercial facility. That’s not easy. But as you see more companies getting through that, that’s why we are seeing more investment coming to into this sector. I think it’s probably at the cusp of taking off now because you have some companies that are starting to show success in this area,” he says.

When global supply for marine ingredients are at a stand-still and global demand for fish production grows exponentially, Mann says it is the aquaculture industry’s responsibility to be part of the solution.

Despite this however, more than a €1 billion (US$1.22 billion) is currently being invested in this sector.

“I think it’s partnerships with neighbours and making a win-win situation, rather than an almost a traditional, ‘I’m big, you’re little’ way of going about it. It puts companies out of business. It closes small towns,” says Mann. “I’ve been part of small, medium, extra large-sized companies myself and I really think that human factor of helping a neighbour out and sustaining a town is important.”