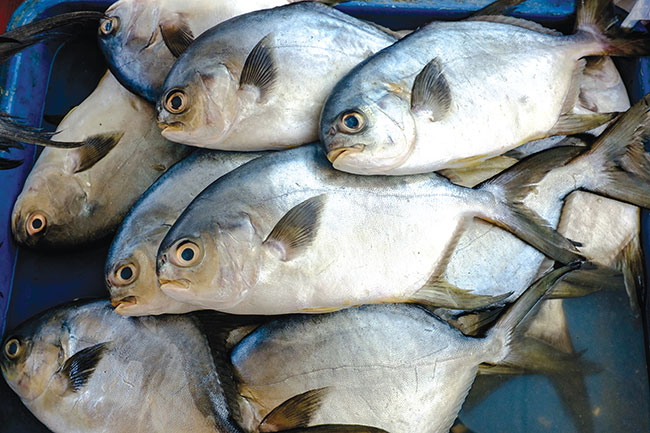 In an effort to provide more fish seed varieties to fish farmers and aquaculturists, India’s Marine Products Export Development Authority (MPEDA) has started the sale of silver pompano seeds from its Multi-species Aquaculture Complex in Vallarpadam, based in Kochi, Kerala state.

Central government fisheries secretary Rajni Sekhri Sibal said the sale will help farmers fetch a good price for their produce. The seeds have been developed by MPEDA, with the help of its research wing, Rajiv Gandhi Centre for Aquaculture (RGCA). State fisheries can adopt the technology from MPEDA-RGCA and set up similar facilities to cater to the needs of the aquaculture farmers.

According to MPEDA, Pompano (Trichinotus blochii) is highly suitable for farming. It is commonly found in the Indo-Pacific region and have been very popular in the Indian aquaculture sector. A cultured pompano ranges from 250 grams up to one kilogram. The fish grows up to 350 to 400 grams within six months in ideal climate conditions, with a production cost not exceeding $2 per kilogram. Pompano is widely cultured in the U.S., China, Taiwan, Malaysia, Indonesia, India, Vietnam and the Philippines. It is an alternative species for low salinity (5 to 35 ppt) shrimp culture.

MPEDA is not the only one that mastered the seeding process, according to Kochi-based Central Marine Fisheries Research Institute (CMFRI) director A. Gopalakrishnan. In 2017, he claimed the institute has been successful in the mass-scale seed production of Indian pompano. The technology was developed at the CMFRI’s Visakhapatnam Regional Centre after two years of research.

By 2050, India should produce at least 10.5 million tonnes of marine fish to meet the growing seafood demand.

The Vallarpadam complex was inaugurated by then Indian Commerce and Industry minister Suresh Prabhu in December 2018. The center has achieved a turnover of US$150,000 in 100 days by selling seeds of GIFT (genetically improved farmed tilapia), seabass and black tiger shrimp.