Those who have lived in New Zealand can tell you that Kiwis excel at devising new ideas to work in their unique environment. There are few places where this excellence is demonstrated more regularly than at the Cawthron Institute. 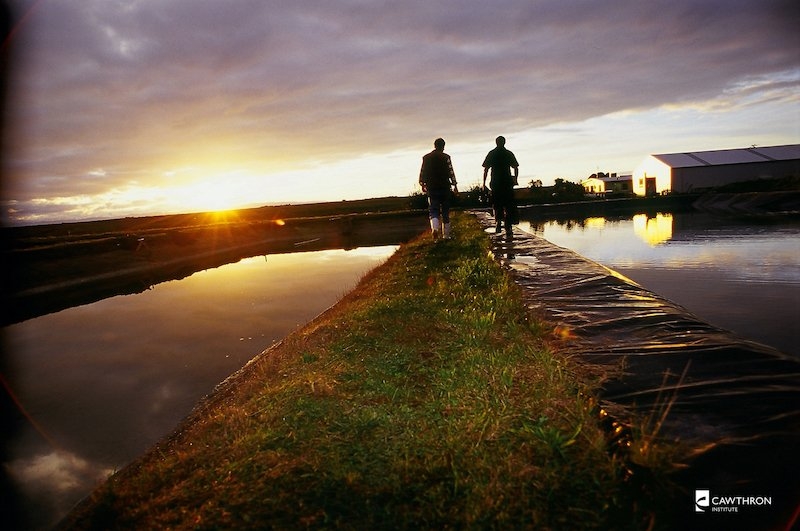 Located in Nelson, on the northern shore of the South Island, the Cawthron Institute was founded in 1919 following a large bequest from Thomas Cawthron. This bequest was born of a belief that science was to play an integral role in the development of the burgeoning western nation.

Focus on growth and preservation

Since inception, the scientists of Cawthron have, “focused firmly on research that contributes to the economic growth of New Zealand and the preservation of its special environment.” Initially this research was focused on exploring agricultural questions, but they branched into forestry as the value of New Zealand timber rose in international markets. Today, their scientific pursuits are centred on protecting New Zealand’s marine and freshwater environments via a focus on dairy, seafood and aquaculture research. The success of these pursuits has allowed Cawthron to become the country’s largest independent science organization.

Their current position as the national leader in aquaculture research has led them to partner with private companies on a variety of projects. In keeping with Thomas Cawthron’s intentions, the science coming out of these partnerships helps the burgeoning aquaculture industry to flourish by reducing uncertainty and improving efficiency.

To Serean Adams, Aquaculture Group Manager, these partnerships mean that companies are, “in control of their own destinies.” The most successful of these partnership stories to date is that of the development of the SpatNZ Greenshell™ Mussel hatchery, now located in the Cawthron Aquaculture Park.

For decades, New Zealand Greenshell Mussel growers relied exclusively on wild-caught spat. Any farmer can tell you about the problems associated with this practice. From international markets that prefer the colour of the female mussel, rendering half your stock less valuable, to the real risk of losing 100% of your spat during transport, wild-caught spat offers the farmers very little certainty. In 1993, this problem caught the eye of senior scientist Dr. Henry Kaspar, who wondered why the industry must use unreliably wild spat whereas, “other farming practices had been selectively breeding for desirable traits for centuries.”

With an increasing international demand for this national delicacy, the government offered Cawthron over $10 million to pursue the technology needed to build a Greenshell Mussel hatchery. The intention of the project was to provide more certainty for growers, so that they in turn invest the resources needed to help the industry reach its full potential. By 2002, they had successfully reared Greenshell mussels in hatchery conditions, giving the team more confidence in the commercial potential of their research.

An example of the many innovative technologies to come out of this research was the invention of the Cawthron Ultra-Density Larval (CUDL) Rearing Tank. In this system, up to a million mussel larvae are introduced into a 2.5 litre oval-cylindrical tank. A constant stream of water carefully mixed with phytoplankton grown on-site pumps through the tank, and a fine mesh prevents the larvae from being washed away. The ability to control constant feeding rates and the increased capacity for larval density results in dramatic increases in efficiency and reliability, beyond other rearing units tried.

scale at the SpatNZ Mussel Hatchery. The hatchery is located on land leased within the Cawthron Aqauculture Park. A joint partnership between Sanford, one of the country’s largest Greenshell producers, and the central government, SpatNZ is, “pioneering natural, selective breeding of Greenshell mussels so our growers have the spat they need to grow the best mussels in the world.”

The first of the mussels hatched at SpatNZ to be harvested began coming off the lines in April 2017. They aim to be producing the spat required for 30,000 tons of market-size mussels by 2019. Serean Adams confirms they are on track to do so.

Having, in a sense, passed the mantle of Greenshell spat rearing on to industry, Cawthron has forged ahead into tackling another upcoming issue for mussel growers: ocean acidification (OA). Greenshell mussel broodstock were taken from the Marlborough Sounds and spawned specifically to create new family lines. Descendants from each line were then exposed to varying acidic environments and currently normal environments. Their condition was then monitored until the D-stage. Mussels are most vulnerable to environmental acidification at this stage as it is when they are required to grow their shell most quickly.

Dr. Norman Ragg, a shellfish researcher with Cawthron and team leader in these trials, said, “Preliminary analysis of our trial data suggests different families have varying resilience to ocean acidification during the fragile early life stages. This means there’s genetic potential within the New Zealand mussel populations to adapt to rapid acidity changes.”

In another industrial partnership, the Cawthron Institute is working with Waikawa Fishing Company, the University of Auckland and Zebra-Tech to develop best practices for rearing larval and juvenile New Zealand Scampi. From this, they hope to help foster a new aquaculture sector.

In 2016, the Institute announced that, in a world first, researchers had successfully hatched eggs from wild-caught Scampi and reared them to early adulthood in their hatchery. Prior to this, only the first larval stage had been recorded, back in 1976, and so this program has offered scientists a view into the early life stages of the Scampi for the first time.

Kevin Heasman, a team leader on the Scampi Project, was quoted as saying, “We’ve got a long, long way to go, but compared to two years ago, we’ve already come a long way. Some people work a species for years and never get past the larvae stage, and we got the larvae through in the first year. While there is a lot more work to do, we’re very excited about the potential for this species.”

The Cawthron Institute is also currently rearing Pacific Oysters, Geoducks and is working on an extensive, nationwide study in partnership with New Zealand King Salmon, and other industry partners, to improve the feed conversion ratio (FCR) of King Salmon by developing a species-specific diet for use on grow-out sites.

With roots deep in industry-leading research, a world-class team of researchers, and a drive to continuously work to protect the nation’s aquatic resources, the Cawthron Institute is poised to remain one of the most important research institutes in the country.

For more information go to www.cawthron.org.nz.