There’s a Winnemem Wintu legend that goes like this: “When we first bubbled out of our sacred spring on Mt. Shasta at the time of creation, we were helpless and unable to speak. It was Salmon, the Nur, who took pity on us and gave us their voice.  In return, we promised to always speak for them.” 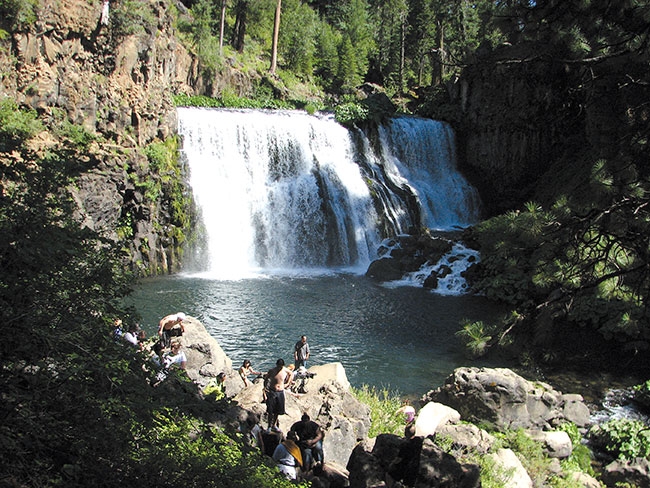 The McCloud River is a tributary of the Sacramento in California There’s a Winnemem Wintu legend that goes like this: “When we first bubbled out of our sacred spring on Mt. Shasta at the time of creation

The Winnemem Wintu people have lived along the McCloud River, a tributary of the Sacramento river in northern California, for thousands of years. During most of that history, they relied on a strong King (Chinook) Salmon run as a resource and a cultural anchor. This changed in 1945 when the Shasta Dam was completed. The dam prevented salmon from returning to the McCloud River, and the Winnemem Wintu people’s sacred and dependable salmon run was lost.

Since then, American authorities have worked hard to keep the Sacramento River run as healthy as they can, mainly through the extensive use of reared and released smolt. While some of these fish return, the stray factor has been much higher than can be expected from an established, naturally occurring run. Combined with the fact that McCloud river fish were not able to bypass the dam and thus were left with no choice but to spawn with other Sacramento fish, this led the Winnemem Wintu to believe that their fish had been lost forever.

The McCloud River is a tributary of the Sacramento in California

Getting them home
Hope, however, has been found for the future of the Winnemem Wintu people and their beloved salmon. Through the late 1800s and early 1900s, salmon eggs from the McCloud River population were sent to over a dozen countries. All attempted seedings failed, except for those fish which were introduced into New Zealand’s Waitaki river in 1901. In 2004, Sisk received an email informing her the descendants of their fish are alive and doing well in New Zealand. The reluctance of New Zealand Fish and Game to interfere with and stock primary spawning streams also meant there was a good chance of finding direct descendants of those original McCloud River fish in these primary streams.

The Winnemem Wintu knew they had to try and get their fish back.

While the Winnemem Wintu began working to possibly retrieve their fish, coincidentally the winter Sacramento run sub-population was recently reclassified as critically endangered, which triggered American federal funding and a mandate for re-establishment, says Dirk Barr, hatcheries manager with North Canterbury Fish and Game. The funds are currently earmarked for the genetic tissue sampling for Winter run DNA in NZ. If successful, further funding will be needed to build a stream through Winnemem Wintu territory, bypassing the dam, and other structures to support downstream and upstream migration.

To ensure the success of the re-establishment effort, the fish used for stocking would have to be naturally occurring winter-run. Barr and his technicians have begun diligently searching across the South Island for suitable, winter-run broods. They have been catching candidates, collecting and drying their fins, and are currently having them analysed to ascertain their status as genuine winter-run, McCloud River descendants.

They have been joined twice now by delegations of the Winnemem Wintu nation, and Barr has visited their territory in California as a guest of the tribe, along with Ngāi Tahu, the Māori Iwi whose territory covers most of the South Island. These visits are motivated by both a desire to remain directly involved in this ecologically important mission, but also as a means of strengthening the cultural conviction that they once feared may disappear.

The cultural impact has been significant. The Winnimem Wintu believe their sacred Mount Shasta has a sister in Aoraki/Mount Cook. Shasta sent the fish to Aoraki for safekeeping while humans were busy doing what they do, but now humans have realized the error of their ways and it is time to bring those salmon home.

With this sort of passion driving them, the stakeholders of this project are poised for success, and the Winnemem Wintu way of life seems certain to survive.