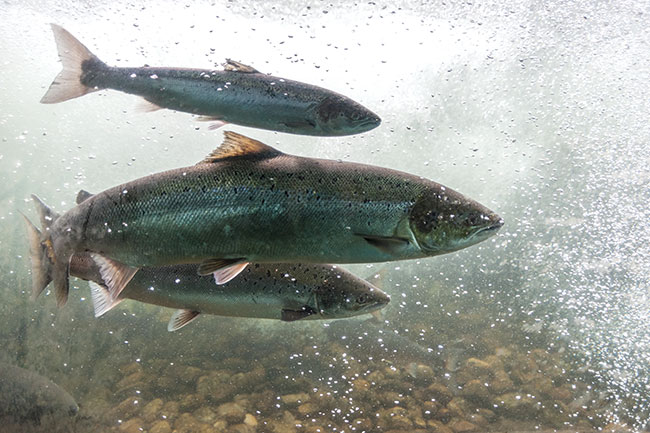 Histidine requirement for Atlantic salmon based on growth and feed efficiency was established by researchers at USDA, casting a new light on its uses.

“The dietary histidine level of North American Atlantic salmon, assessed in terms of growth performance, was met by 0.9 per cent of the diet for smolt growth,” said authors Brian Peterson et al.

Their study, “Effects of histidine on growth performance of North American Atlantic salmon” was designed to augment the “lack of information on histidine requirements in Atlantic salmon regarding cataracts and important stages of growth.”

This amino acid is commonly used as a supplement in salmon diet to prevent incidence of cataracts.

“To ensure maximum growth of Atlantic salmon, no single amino acid can be limiting. In the past, the histidine requirement for Atlantic salmon has been measured using reduction in cataract formation and not growth,” they said.

The dietary histidine level of North American Atlantic salmon, assessed in the current study terms of growth performance, was met by 0.9 per cent of the diet for smolt growth.

In the first trial using smolts, fish doubled in weight and had similar feed conversion ratio (FCR) and thermal growth co-efficient (TGC). In the second trial, the fish grew approximately 40 per cent and again had similar FCR and TGC.

Optimizing growth and FCR in Atlantic salmon is spurred by increasing fishmeal costs and consequently, search for alternative proteins and sustainable ingredients. Plant proteins have been identified. Compared to animal proteins, these have reduced content of essential amino acids. This leads to lower protein synthesis, a process involved in making proteins.

A 16-week feeding trial with graded levels of histidine was conducted in a seawater recirculating aquaculture system (RAS). Smolt and juvenile in RAS were fed histidine levels of 0.5, 0.7, 0.9, 1.1, 1.3, and 1.5 per cent. All the experimental diets were formulated to satisfy the nutritional requirements of sub-adult Atlantic salmon.

In the first trial, smolt at about 355 grams grew to around one kilogram, translating to percentage weight gains between 157 and 225 per cent. This didn’t vary much between the dietary groups. At an average FCR of one, this was also what is normally observed in growth trials and treatments were not significantly different, they said. Examined though visual inspections, cataracts were detected in only one fish out of 50 in the trial.

The second trial, this one for juvenile, used the same levels of histidine and was conducted in a similar manner as the first trial for 16 weeks. Fish started at about 600 grams and grew to approximately 1.1 kilograms. The percent increase was between 35 to 45 per cent. It must be noted that the trial happened winter and with shorter day length and colder average water temperatures.

The FCR was also higher compared to the first trial ranging from 1.1 to 1.3. Diet digestibility for histidine ranged from 93 per cent to 97 per cent. From a total of 50 fish, cataracts were identified in only two from the juvenile trial. “…[T]herefore, we did not detect any cataract formation due to dietary treatment.  dietary treatment,” they said. No statistical differences were detected wihtin the second trial based on TGC or FCR.

These studies recommended much higher level of dietary histidine needed to reduce the formation of cataracts in salmon.