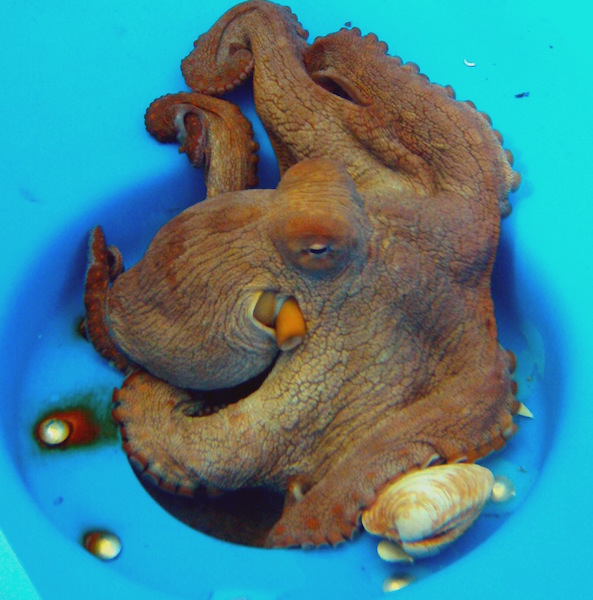 Octopus are great candidates for aquaculture — they are fast-growing

A Hawaiian aquaculturist and entrepreneur is launching an octopus hatchery and farm.

“I really wanted to do something that hadn’t been done before,” says Jake Conroy from his Kanaloa Octopus Farms in Kailua-Kona on the island of Hawaii.

Conroy, a tropical fish hobbyist, is looking first at the aquarium market with hopes to provide a more sustainable option.

“When I found out where these animals were coming from, not so much in Hawaii, but in the Philippines and Indonesia and the fishing methods they use, it led me to want to do something about it.”

“I studied at Hawaii Pacific University (HPU) on Oahu in the finfish department focused on ornamental aquaculture,” Conroy says.

He has worked with HPU’s Ocean Institute culturing yellow tang for the ornamental market, done

a stint at a sea horse farm in Kona and worked for the state breeding sea urchins to be used as a bio control agent to control invasive seaweed on coral reefs.

“Octopus seemed like a great candidate for aquaculture,” says Conroy, and indeed it is. Fast-growing, the scavengers will eat a variety of low-cost foods including waste from seafood processing, while showing high feed conversion ratios (less than 1 to 1). They have a high reproductive rate and adapt to living in captivity and are a popular addition to salt water aquariums.

There is a strong market. “Almost every aquarium has one,” says Conroy. They are also a tasty feature in Asian and Mediterranean cuisine. The Department of Fisheries in Western Australia (DFWA) pegs global consumption at 270,000 tons per year. And there is a good market price for both ornamentals and food.

There’s only one problem. They die in the hatchery.

Researchers in Spain and Western Australia have studied octopus larval survival extensively (DFWA just completed a major report). They know it’s related to the live feed that the larvae require. There has been some success with enriched artemia, as well as crab zoea, and artemia and zoea combined, but more research is needed.

“The bottle neck is in the hatchery,” Conroy concurs. “Even when they feed them one crab larvae to six artemia naupili they are much more suited to survive than if they ate just artemia.”

Conroy has set up in a 500 square foot wet lab he is leasing from the National Energy Laboratory of Hawaii. He has two ocean water intakes, both surface and deep for his flow-through tank system. The deeper water comes in at 5° – 6°C, allowing him to mix it with the warmer surface water for an ideal temperature. “The deep sea water is more nutrient-rich so it’s great for growing spirulina and micro algae,” he says.

He put his first breeding pair together and thinks they have mated. “They were all over each other, but it’s too early to tell.”

“Mostly I’m focusing on breeding crab larvae,” Conroy explains. “So once I do get octopus paralarvae I’ll have some feed to keep them alive.” He says the system design is the most difficult part of raising the crabs. “Breeding the crab is fine but collecting the larvae, making sure you get them all, is a problem.”

Currently there are three, 700ltr broodstock tanks and Conroy is building six more to add at least six more animals. “Which increases my chances of getting eggs.”

Animals on site were being fed clams. “I have aquaculture neighbors so I walk over and get a bag of clams,” chuckles Conroy. “But this morning I came up with a gel sort of pellet, shrimp meat and crab meat and spirulina and gelatin that stays soluble in water and at room temperature and I fed it to them and they accepted it.”

Conroy is offering tours to help with the bills. “People totally love to come in and see what I am doing. I’m the only one in Hawaii and the US.

“I’m aiming for the ornamental market. I can get more per pound even for small ones,” says Conroy. “It seems the logical first way to go.” If that’s successful he will look at supplying the fresh food market.”