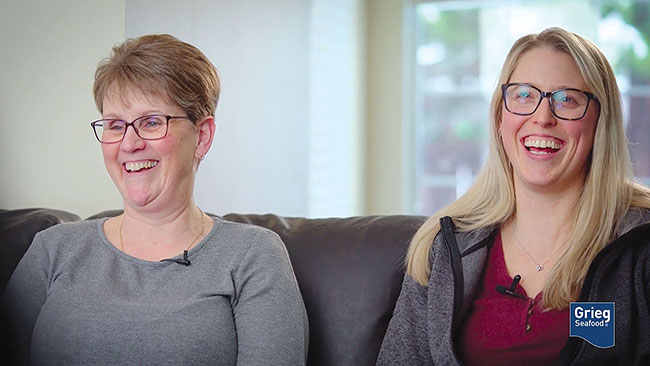 Brenda and Ashlee Bailey, the mother and daughter who both work as assistant freshwater production manager at Grieg’s Atlantic salmon hatchery in Gold River, B.C. Photo: Grieg BC

How’s your day?” is a question often heard over family dinners but at the Bailey household the conversation could turn into a work meeting if one isn’t mindful, admits Brenda Bailey.

Brenda is an assistant freshwater production manager at Grieg BC Seafood Ltd’s Atlantic salmon hatchery in Gold River, British Columbia, in Canada, and her daughter Ashlee Bailey also works there and holds the same position.

“We kind of have an unwritten rule that if we’re going to talk about work in family settings, we give ourselves a time limit. I know my husband sometimes will look at Ashley’s fiancé and ask him: ‘Do you have any idea what they’re talking about?’ You got to be mindful of that, right?” says Brenda.

One doesn’t have to go any further than the Bailey household to see aquaculture’s economic impact on coastal communities. Gold River used to be a pulp and paper mill town but the mills’ shutdown in 1998 left more than 350 people jobless and prompted outmigration. Grieg BC currently employs 24 people in the town and 170 province-wide.

Brenda’s three children were employed at Grieg BC at some point in their lives. Her eldest son had worked on a construction crew that built one of the buildings on the hatchery site and then moved on to work at the company’s sea site; he’s now in logging. When Brenda’s daughter-in-law managed the broodstock site, Brenda’s youngest son and Ashlee worked after school and on weekends and holidays to help out at the facility.

It’s been roughly 12 years now since the mother and daughter first step foot in Grieg’s aquaculture facility. It took much soul-searching for Brenda (long hours and the fact she could be called in attend to the hatchery in the middle of the night) before she applied for the assistant manager position in 2015, but she knows she made the right choice.

“Seeing the end product is so rewarding,” she says. “When I worked as a hatchery technician I worked in the smolt department and when you’re shipping them out to the sea site, it’s like shipping out your kids at the house to go to the university. It’s a good feeling. You’re prideful because you know they come in as eggs. The other thing is you’re helping feed the world because eventually there’s not going to be wild stock. So that’s the good part. And the other part is that when you hear about us selling our product to restaurante, like the Kentucky Derby and things like that, I’d think: I grew that!”

For Ashlee, the decision to apply for the assistant manager position came within a few months of her exposure to hatchery work. “At first I really didn’t know anything about hatchery because I was working in the broodstock facility, doing anything from injecting the fish to stripping the eggs. After a transfer to actual hatchery work I started becoming really, really interested. After three or four months, I knew that it was something I wanted to do full time,” she says.