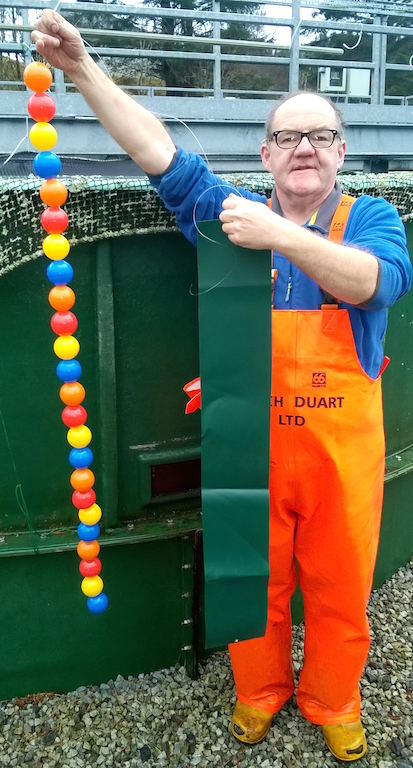 Loch Duart's Hugh Ross holds a piece of tarpaulin strip and a line of brightly coloured balls that were hung in the tank. The tarpaulin (resembling kelp) gave the fish a place to hide - a natural instinct essential to the survival of young fish – and avoid ‘bully’ fish David Roadknight and his team at Loch Duart

In general, we are much more aware of the issues related to farming animals on land than we arefor animals farmed in water. Behavioural issues like tail-biting in pigs and feather-pecking in hens are understood and extensively researched. But the reasons for fin-nipping in young salmon are less understood.

Loch Duart, a salmon producer in Scotland, together with Stirling University, is looking at the problem and coming up with some innovative ideas to prevent aggression and improve fish welfare.

Juvenile salmon in hatcheries often nip the fins of their tank-mates and, uncontrolled, this can have serious long-term effects on the health and quality of the fish. Indeed, it is widely accepted that fin damage is an indicator of poor fish welfare but, until now, few new strategies to address the problem have emerged.

David Roadknight and his team at Loch Duart’s Sutherland facility set about to see what they could do, confirming initially that a consistent and adequate feed supply reduces the amount of fin damage but does not eliminate it. They also observed that a strong directional flow of current and maintaining low stocking densities helped. While each of these strategies contributed to alleviating the problem, they did not eliminate it.

Upon further observation, it occurred to the team that tank interiors provide a very bland environment, even for very young fish. Perhaps the fish were simply bored. So the team set to work to add some environmental enrichment for the nursery fish.

A piece of tarpaulin strip and a line of brightly coloured balls were hung in the tank. The tarpaulin (resembling kelp) gave the fish a place to hide – a natural instinct essential to the survival of young fish – and avoid ‘bully’ fish, the major biting culprits. The balls allowed the salmon to have some fun. And play they did, breaking the pattern of endless aimless circles that can lead to chasing and nipping at each other.

Jimmy Turnbull, Professor of Aquatic Population Health and Welfare at Stirling University said: “This is obviously a very small study and you cannot extrapolate too far from it – but the fish in the tanks with enrichment apparently have better fins and this is very promising.”

Alban Denton, Managing Director of Loch Duart noted, “Loch Duart is committed to the best welfare achievable and David Roadknight’s innovation has the potential to improve the welfare of salmon in hatcheries significantly. … welfare and taste are inextricably linked.”

The fish aren’t talking. But Loch Duart and Stirling University certainly are – about the next set of trials. Who knows what toys they will come up with next.