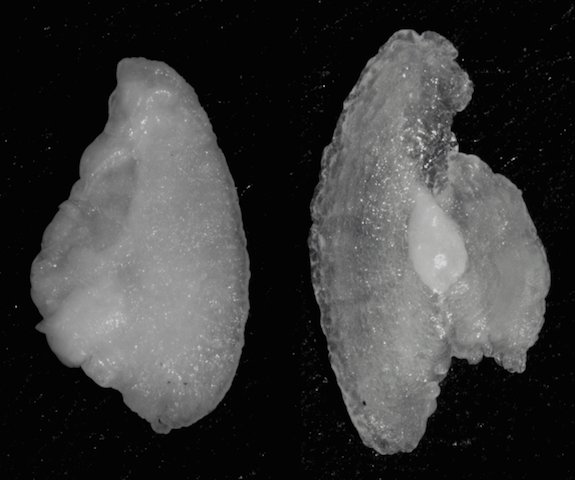 As many as half of the world’s hatchery-bred salmon have trouble hearing according to a study published recently in Scientific Reports. The hearing loss is owing to a deformity of the sagittal otolith, the primary hearing structure in the inner ear.

The researchers, led by Tormey Reimer from the University of Melbourne’s School of BioSciences, sampled wild and farmed salmon in Norway. Their findings revealed that the prevalence of vaterite, a crystal form that replaces calcium carbonate in the ear bone or otolith, was ten times more likely to appear in farmed fish than in their wild cousins.

Reimer said the deformity occurs at an early age, more often than not while fish are still in the hatchery, but that its effects on the fish’s hearing become more pronounced as time passes.        “Our research suggests that fish afflicted with this deformity can lose up to 50% of their hearing sensitivity,” Reimer says.

To test further whether the deformity was occurring globally, researchers from the university and the Norwegian Institute for Nature Research looked into samples from each of the world’s biggest salmon-producing nations: Norway, Canada, Scotland, Chile and Australia.

they also assessed the hearing of the fish using a model that predicts what a fish can hear.

Regardless of the country where salmon were farmed, the study found, the deformity was much higher in farmed fish than wild fish.

“Something about the ‘farming process’ is causing the deformity,” co-author Assoc. Prof. Tim Dempster (also from the School of Biosciences at the University of Melbourne) commented.

Billions of hatchery-bred juvenile salmon are released into rivers, streams and lakes in North America, Asia and Europe every year, to boost wild populations. Their survival is between 10 and 20 times lower than that of wild salmon. Reimer suggested that perhaps hearing loss is preventing fish from detecting predators, as well as hampering their ability to navigate their way back to their natal rivers to spawn.