Already a gourmet staple in Portugal and Spain, where wild-caught soft-necked gooseneck barnacles fetch up to $90 a pound, interest in culturing this novel species has begun to grow on the west coast of North America.


Based on the high demand and profit of this fishery overseas and rumblings of interest in North America as well, a professor at the University of Oregon, Dr. Alan Shanks, decided to investigate the feasibility of a commercial U.S. market and what that might look like for the Oregon coast.

As a relatively new species of interest, state regulations are still evolving. Currently Oregon regulations limit wild harvest of the barnacles to 50 individuals of any size on man-made structures like rock jetties. Nearby Washington state limits recreational harvest to a daily limit of 10 pounds whole or 5 pounds barnacle stalks.

The investigation is a forward-thinking project by Shanks and a handful of research assistants at the University. They have three main goals:

• First: take an estimate of current inventory of harvestable-sized Pollicipes polymerus, the species found in the intertidal zone on America’s west coast.

• And thirdly, work with local seafood collectives, the public and state resource managers to build a partnership for a sustainable market.


The project strives for multistakeholder collaboration to help protect and manage this growing market and avoid depleting the stocks by overfishing, which has already happened in Spain.

There are some obvious hurdles to overcome for this market to be successful, like convincing a timid American seafood palate to try something new, especially when the “new” is an oddly shaped, rubbery crustacean found clinging to rocks in the crashing surf of the intertidal zone. “We like to use the name “percebes” (Spanish for barnacle) or “devil’s fingers”…. it sounds more exotic and palatable than “barnacle”, explains Dr. Alan Shanks.

Also the current stocks of harvestable-sized adults pose a limitation to large-scale harvest in Oregon. Alan’s research assistants found only a small amount (2.3%) of the jetty populations to be of commercial interest and depending on fishing pressures could be wiped out within a year. Because of their slow growth rate, unique recruitment of larvae, and collectors having to take the whole clump of barnacles which include many tiny individuals, it could a long time to recover the stocks in those areas.

Mariculture of these prized crustaceans seems like a good alternative to wild harvest, but has proven elusive so far.

Alexa Romersa, a grad student working on the aquaculture end of the project at the University of Oregon understands the obstacles well …. “Rearing the barnacle larvae in a lab setting is notoriously difficult and you often end up with varying quality of the juvenile cohort. Larval rearing also lengthens the process because transition from nauplius to cyprid to juvenile can take between 40 and 60 days.”

It was also thought that the developing barnacles needed high water flow (which can be costly to provide) to mimic crashing waves of its environment in order to feed.

But an interesting observation in a fish aquarium at the Oregon Institute of Marine Biology (OIMB) lead Dr. Shanks to make an important discovery for the barnacle’s future in mariculture:

“I saw a cluster of gooseneck barnacles attached to the wall of the aquarium, directly above the air bubbler. There was no high-water flow in this area of the tank….yet it appeared the barnacles were thriving near the air bubbles.”

His observation led to the design of a low-flow, aerated mariculture design used in his lab set-up, along with other improvements for efficiency.

Alexa detailed the experimental aquaculture set-up in her lab:

“We work exclusively with wild caught adults and juveniles that I harvest off rocks in the intertidal. Individuals are glued onto a vertical rod placed inside a PVC tubing tank. Each tank has a water and air inflow near the base and air is connected to a coil of diffuser tubing that provides constant aeration for the barnacles.”

“The aeration tubing (the type commonly used in gardening) is the major discovery of this phase of the experiment. Previous efforts at studying growth in gooseneck barnacles in the lab have attempted to mimic natural intertidal conditions by providing high volume water flow in order to trigger the specialized feeding behavior of pollicipes polymerus. However, I have been able to prompt the same behavior with air bubbles helped along by gravity. Air is cheaper and more easily scaled to a commercial operation.”

Shank’s team has also found that they can stimulate good natural recruitment of larvae in the lab by piping in unfiltered, natural seawater containing barnacle cyprid (active swimming larvae) that then settle on existing adults and increase their stock numbers.

The barnacles have been fed two diets: rotifers, a zooplankton that is bio-enhanced with micronutrients and vitamins, and an emulsified fish blend collected from the local fish processing plant. The viscera is dehydrated, then ground into a powder and re-suspended in solution for easy feeding.

In terms of cost, Alexa estimates the entire operation cost about $1000 dollars to set up. The research lab is small by aquaculture standards- using about 200 gallons of seawater per day and 20psi for air. But she expects a similar sized commercial operation could successfully culture between 1000 and 2000 barnacles that would grow from juvenile to commercial size in less than a year with feeding twice daily, even faster if fed continuously.

In terms of yield she estimates that a single large barnacle would weigh in at 5g, so 200 barnacles would fetch around $160-$180 US dollars with current prices, so there is a good return on investment.

The barnacle’s unique form of recruitment with larvae preferring to settle on other adult gooseneck barnacles also makes this species ideal for aquaculture since wild harvesting takes the whole colony of barnacles at once, not just adults, and would deplenish future juvenile populations quickly.

So with many of the hurdles of mariculture being addressed, that just leaves convincing the average US consumer to take the plunge. Currently the Port Orford Ocean Resources Team is interested in selling the barnacles in their farmers’ basket, similar to the concept of Community Supported Agriculture (CSA) farm boxes.

“We don’t yet know all the nutritional facts for this tasty little creature”, says Shanks, but with the growing interest and profit potential, he is eager to look at that next. He’s working on acquiring a third research grant from Sea Grant, called the “Leaf” grant, to examine the fatty acid content of this salty little snack. 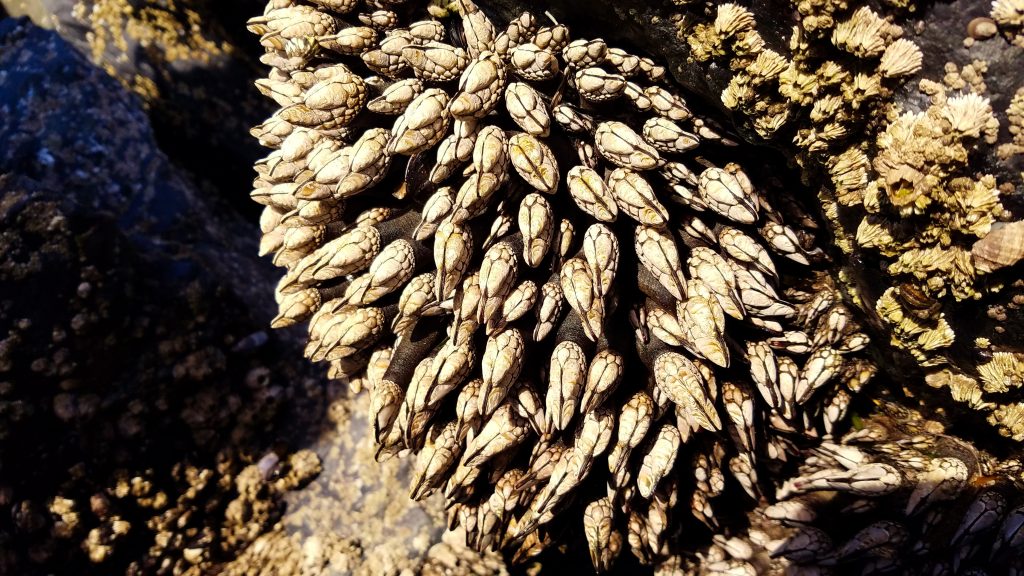