Genetics is the number one driver of aquaculture growth and merit, capable of delivering year-on-year performance gains of 5 to 10 percent, while other sectors of industry innovation are giving producers a more modest one to two per cent a year extra, and that’s ‘if you’re lucky.’ 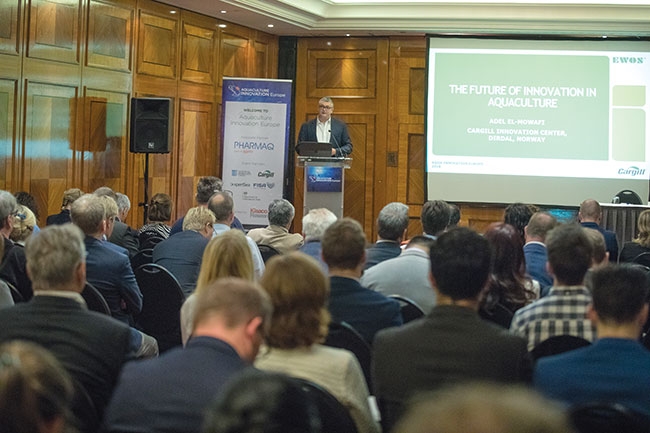 That was the headline message given to delegates at Aquaculture Innovation Europe 2018 in London, by Gorjan Nikolik, associate director of Animal Protein/Seafood for RaboResearch Food and Agribusiness, a division of the giant Rabobank Group.

Addressing a high-profile audience of business leaders and aquaculture innovators, Nikolik said he saw aquaculture as a compelling investment opportunity, not least because of the industry’s huge potential for future growth. He then went on to highlight genetics as the industry’s leading focus area going forward.

“You only have to look at how genetic improvements have advanced the pig and poultry industries in the past to appreciate what now lies ahead for aquaculture,” he said. “We’ve already seen good genetic advances being made with salmon, but there are many other species which are ready and waiting for similar development.”

Encouraging
Tasked with the job of actually converting such headline optimism into breeding reality, Professor Ross Houston, personal chair of Aquaculture Genetics, The Roslin Institute, University of Edinburgh, welcomed the industry’s growing interest in his speciality before giving delegates a glimpse of the future as he sees it.

“Genetics was barely on the radar of the general aquaculture community 10 years ago,” he said. “Now it’s very much on a par with other areas of innovation, such as nutrition and disease resistance research, and that’s encouraging.

“Certainly, I believe well-managed selective breeding programs have the potential to make a transformative difference to aquaculture production. Especially as compared to other farmed species, we’re still very much at the beginning of our genetic process.”

In some cases, he reminded delegates, fish farmers are still working with what is effectively wild stock, a fact that emphasizes the potential gains, which remain to be realised.

“Selective breeding technologies, for example, have major potential to deliver an improvement of production traits, based largely on technology transfers from farm livestock to aquaculture,” he said.

“Genomic selection, in addition, is offering us improved selection accuracy and genetic gain while genome editing gives us the potential to enhance production. This includes a growing ability to create new disease-resistant alleles.”

Later in his presentation, when looking closer at potential applications for genome editing in aquaculture, Houston raised the tantalising prospect of taking natural sea lice resistance, as found in Coho salmon, and applying it to lice-susceptible Atlantic salmon.

“This is the Holy Grail that’s talked about in relation to sea lice research,” he said. “If we could only find the mechanisms by which a lice-resistant salmonid species, such as Coho, is resistant and then transfer the relevant alleles into lice-susceptible Atlantic.

“The potential for this to be done definitely exists but would require a huge body of research to get to a solution. We would need to know, for example, what mechanisms make Coho resistant to lice and what genes control those mechanisms. In addition, the answer is going to be multi-factorial with no single gene identifiable as the key to resistance.

“It’s obviously a complex proposition but it’s still surely worthy of study, especially given the scale of the problem as it exists today.”

Regulatory hurdles
Realising such breeding and genetic objectives inevitably require researchers to overcome considerable regulatory hurdles, however, a point highlighted during a session on genetic engineering in aquaculture, led by John Buchanan, CEO of the Center for Aquaculture Technologies, based in both the U.S. and Canada.

Reviewing the wide range of global guidance which exists for the regulation of products derived from genome editing, he pointed out that the EU and India lead the way on maximum regulations by requiring genome-derived products to be regulated for both animal and crops/plant usage.

In the Argentine, Canada and Japan, meanwhile, regulation is not required in relation to crops/plant usage but the ‘jury remains out’ in all three countries in terms of animals.

Finally, in the U.S., the situation remains typically confused being split 50/50 with crops/plant usage being allowed to progress without any regulation while animal products are regulated.