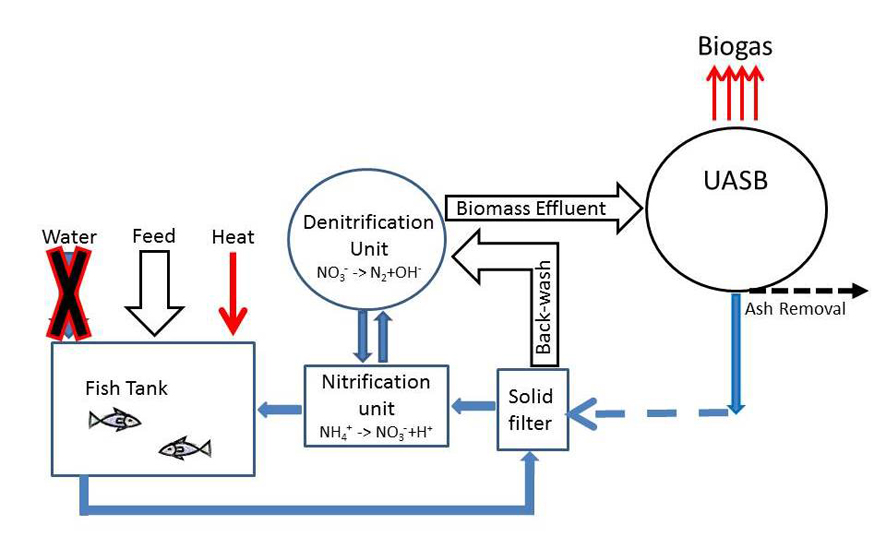 Converting saline sludge (from marine and brackish re-circulating systems) to bio-methanecould reduce waste sludge volume significantly and at the same time generate an energy source for the RAS.

Closed recirculating systems (RASs) are being developed as sustainable alternatives for the inland farming of marine fish because their fully controlled operations conserve water, reduce the generation of effluents and minimize their environmental impact. However, solid waste disposal, principally of fish feces and uneaten feed, can be a problem.

New, more stringent waste disposal regulations have stimulated the aquaculture industry to include solid waste treatment into their operations, which in freshwater systems typically use conventional flocculation/coagulation processes to reduce sludge volume prior to composting for disposal on land.

However, saline sludge from marine – and brackish systems cannot be so used. An alternative is to convert such sludge to bio-methane, which could reduce waste sludge volume significantly, while generating an energy source for the RAS.

Since the organic fraction of marine sludge ranges from 50-92%, and typically the total solids content of sludge (unless it is concentrated) ranges from 10-30 g/l, a modified up-flow anaerobic sludge blanket (UASB) reactor was chosen as the preferred technology. This was included in a novel, pilot scale, brackish RAS assembled by Kora Ltd, that included a 1 m3 fish tank with three treatment loops designed to support a maximum stocking density of 300 kg/m3.

In the first treatment loop, water from the fish tank was recirculated at a high rate through a solids filter followed by a fixed film aerated nitrification reactor thence back to the tank. The raw sludge was backwashed from the solids filter every few hours for further treatment in the second loop.

The second (denitrifying) loop removes nitrogen in a single stage activated sludge bioreactor. Denitrification is an anoxic process carried out by heterotrophic bacteria. Raw sludge from the first treatment loop is the carbon source and water from the nitrification bioreactor (first loop) is the source of nitrate.

Excess sludge (biomass) resulting from microbial growth in the denitrification reactor is treated in the UASB reactor which further removes solids and produces biogas, which can be used to offset energy costs.

Initially, 347 African catfish (Clarias gariepinus), average weight 310g, were introduced into the tank, and fed at a rate of 1-2% body-weight per day on a 45% protein commercial feed. The system was operated for over 147 Days.

Survival was 95% and FCR 1.47. Average fish weight at harvesting was 810 g corresponding to an overall biomass of 267 kg/m3. Overall Water exchange rate was <2% and water quality was high and clearly suitable for fish growth.

Salinity of the water was in the order of 5% (ca. 7-8 mS/cm by conductivity measurement), which Dr. Gross concedes is not particularly salty, but is typical of saline aquifers in that part of the world, and elsewhere. He also noted that conductivity increased over the course of the experiment because of ions added with the feed and by fish excretion.

Ammonia and nitrite concentrations were <1 mg N/l, and nitrate concentration did not exceed <56 mg N/l with an average concentration of 19mg/l. pH ranged from 7.4 to 8.7, and dissolved oxygen was always above 5mg/l. Biogas production (55% methane) increased with the biomass and toward the end of the experiment (when feeding rate was 2150 g/day) averaged 300l/day. During this period, there was a 90% reduction in the amount of disposable solid waste, compared with a traditional RAS.

The study was supported by the BARD US4453-11. For more information contact Dr. Gross at: amgross@bgu.ac.il