One man’s trash is another man’s treasure. That’s the basic principle behind TimberFish Technologies, an American company that has built an aquaculture system that cleans a waste product, and in the process provides clean water for fish to grow and microbes to culture food to feed those fish. 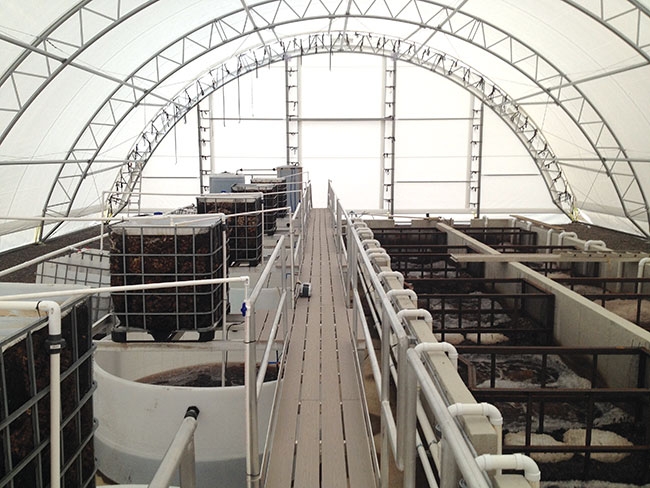 TimberFish Technlogies in New York is drumming up interest with innovative tech that turns beer waste to fish feed One man’s trash is another man’s treasure.”

The initial TimberFish facility is located right next to the 5&20 Spirits and Brewery in western New York state. The bi-products of brewing alcohol are considered waste and would have to be disposed of at a cost to the brewery.

“We take the discharge from the brewery and use it to grow microbes and invertebrates that we feed to our fish,” explains Jere Northrop, TimberFish co-founder and managing member.

It took more than 45 years of working with waste treatment technology to develop this process. Northrop has a PhD in biophysics and decades of experience designing systems to manage agricultural waste for the dairy and hog industries, as well as working with water treatment systems for food processing and municipal wastewater. “I’ve wanted to do fish for a long time,” says Northrop.

Processing system
The company has built a demonstration project utilizing an in-ground concrete tank 70 feet long, 20 feet wide and eight feet deep, with a concrete wall that divides the tank in half. In all, the system runs about 45,000 gallons.

“We feed it 500 to 700 gallons a day depending on how much waste we get from the alcohol-making process,” explains Northrop. Using sustainably harvested wood chips, the water gets sufficiently cleaned to be used to raise fish, and the remaining biomass becomes fish food.

On one side of the concrete tank, the waste runs through a series of zones – first a water zone and then a wood chip zone. Each zone is between five and eight feet wide and constantly aerated.

Northrop says the second train provides additional polishing for the water which is then pumped through a chip basket suspended above one of five 1,000-gallon plastic fish rearing tanks, that sit on a concrete pad outside the treatment system.

“We do some final polishing in the chip baskets above the fish tanks with the water dripping down into the tanks,” he says. “The chip basket above the tanks takes out the dissolved waste, nitrogen and phosphorus that is left.”

Each fish tank has a pump that circulates the water in the tank and up to irrigate the chip basket. A second pump draws off fish solids to send them back through the water treatment system.

The fish are fed either with invertebrates harvested from the system, or that fall into the grow tanks from the chip baskets above.

“Daily discharge from the system is equal to their daily influent,” says Northrop. “That is clean water under a strict SPDES permit from the NYS Department of Environmental Conservation.”

“The waste from the brewery is a great food source,” notes Northrop. ”Because it is food grade, it has no contaminants.” However, it is a difficult waste stream to treat he adds.

“It has very high BOD (biochemical oxygen demand) and suspended solids, high nitrogen and high phosphorus levels, so we really need to have that second side of the tank to assimilate most of it into a microbial bio mass.”

That’s the reason the fish tanks are on the outside, Northrop says. “We could run a system with a different influent stream with fish in the second treatment side, but this one is a little tough.”

Fish species
The project was initially stocked with warm water species – catfish, bass and perch – that will tolerate the warmer temperatures in the outside growing tanks. TimberFish has experimented with trout and has eyes on charr and salmon. A larger installation with grow tanks in ground would be easier to cool for trout.

“We did a proof of concept with the Fresh Water Institute and we used their expertise for the fish raising part of the design,” Northrop says. “We can basically provide 100 per cent of a trout diet from the invertebrates and the microbial floc that we produce.”

The natural feed produces a trout of full color that does not need purging. It has a slightly lower fat content that is high in Omega 3. “But it’s interesting, the cost of producing the invertebrates is slightly higher than the cost of a relatively low quality grade based feed pellet.”

“We have set up the system to do both and it remains to be seen how it is going to tip as to whether we feed all invertebrates and bio mass produced within the system and whether we supplement it or not,” Northrop notes.

There is a side story to the wood chips. The waste treatment system removes much of the cellulose and carbohydrates, and the high-energy residue left behind is mostly lignin. “It’s half the weight of the raw wood chips, but we can sell it for more than we paid for the original chips to be turned into pellets for wood stoves, or we could use it to produce our own electricity.”

Income potential
Northrop describes the waste disposal process as a “significant charge” to the brewery operation. “They pay a trucking charge to move it and pay per gallon at the waste water treatment plant,” he says. The company could apply for a land application permit, but would be restricted to five months of the year and would need to maintain a tractor and spreader tanks and pay for an operator.

“We can create an alternative income stream by turning that waste into a salable product,” says Northrop. The 5&20 Spirits and Brewery are stakeholders in the project.

The company has an economic model that considers the impact a fluctuation in variables will have on the end cost.

“We consider the interest rate, cost of labour, cost of electricity, what our material costs (are) and how much is capital versus operating expenses, what type of inputs we can get and the sale price of various species of fish,” says Northrop.

“This system is very environmentally friendly and benign,” Northrop points out. “It promotes reforestation, produces clean water, has a low carbon footprint, and grows local fish. All of those are good things, but it still has to make money in today’s market.”