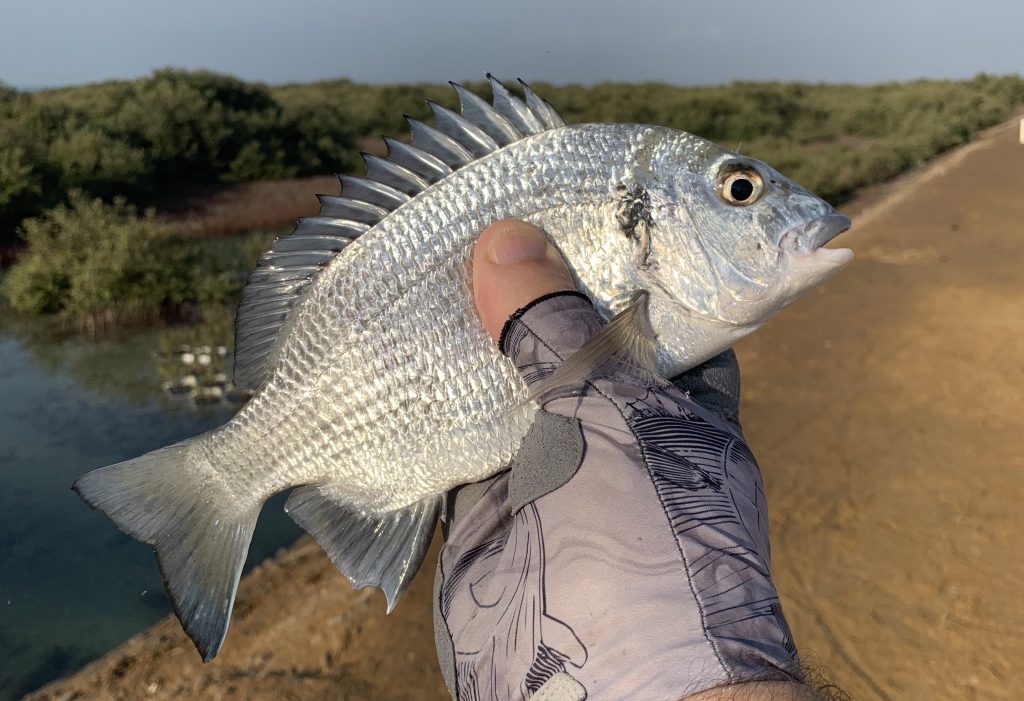 Distinct features of the gill cover and pectoral fin are among the physical differences that led Donal Bradley to believe that he had discovered a new species of sea bream, now confirmed and named, Acanthopagrus oconnora, or Bev Bradley’s Bream for short. (Photo: Donal Bradley / KAUST)

Acanthopagrus oconnorae is the common name given to a new species of sea bream found in the Red Sea by Dr. Donal Bradley, distinguished Professor and former vice-president of research at King Abdullah University of Science and Technology (KAUST) in Saudi Arabia. The discovery was made while fishing in mangrove habitat off the shore of the university.

The “new fish” is distinguished from other bream species for having a more shallowly sloping forehead, a distinct black patch on the rearward edge of the gill cover, a more yellowish pectoral fin and paler body colour.

Bradley sent a fin clipping from the fish to the university’s Red Sea Research Center (RSRC) for genetic analysis, prompting a search for another fish of its kind. Eventually, Bradley caught another one, which enabled the scientists to conduct a detailed study of bream specimens, including direct comparison of their physical morphology and genetics with other sea bream from the region (A. berda, A. bifasciatus and R. haffara), Arabian Gulf (A. arabicus, A. sheim, and A. catenula), and with records online.

Marine scientist and Director of the KAUST Red Sea Research Center (RSRC) Mike Berumen confirmed that the fish is a distinct species with its closest relative, the Wandering Sea Bream (A. vagus), which inhabits long stretches of the Indian Ocean coast of South Africa and Mozambique.

A recently published paper in the Journal of Fish Biology, Acanthopagrus oconnorae, a new species of seabream (Sparidae) from the Red Sea, details the findings.

One conjecture from the RSRC team as to why this fish eluded identification until now, despite the earliest studies on sea bream in the region beginning around 250 years ago, is that it favors shallow water in and around mangrove stands, which is not a regular target for fisheries activity or scientific diving.