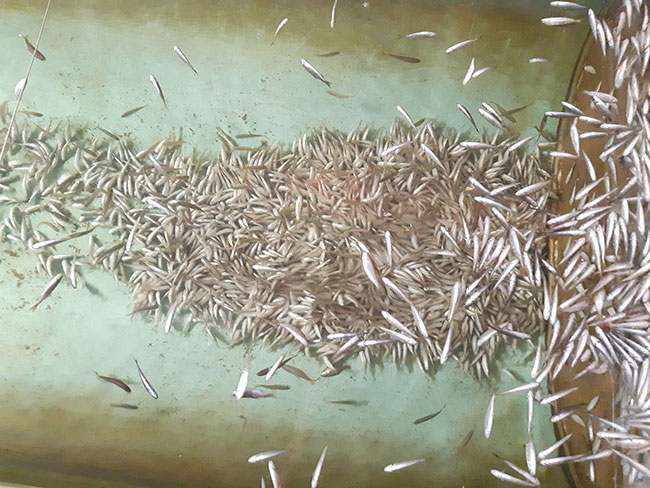 The shocking sight that greeted Hoy Scott Watershed Society president Robbin Whachell when she checked on the hatchery the evening of May 29th. The hatchery lost almost half of its stock of coho fry.

Significant numbers of fish were found dead in Coquitlam, B.C., including roughly half the 5,000 coho fry at the Hoy Creek Hatchery. A pollutant in the river is suspected but specific testing in late May has been inconclusive.

“I was devastated by what I saw,” said Hoy Scott Watershed Society president Robbin Whachell. “You’re used to seeing the odd fish dead, or maybe there’s, you know, a fungal situation happening but to see what looked like, at the time, 80 per cent of our fish floating or at the bottom of the trough, I was gutted.”

The losses at the hatchery were discovered after residents reported seeing dead lamprey, crawfish, trout and coho in the waters in the area. Whachell said she could smell and taste a chemical in the air, similar to bleach or ammonia.

“We do have one in-flow area north of the creek that has been a spot where we’ve seen contaminants enter the stream and the hatchery manager said the smell of ammonia around that area was quite high.”

Whachell said the city was unable to perform a water test in that area until 24 hours after residents had reported dead fish in the creek. The results were inconclusive. Fisheries and Oceans Canada received a report on the incident and referred it to Environment and Climate Change Canada (ECCC). A spokesperson for ECCC said they monitored the situation at the hatchery and recovered the mortalities, but the source of the pollutant could not be identified.

Whachell suspects the cause was someone improperly disposing of chemicals and hopes that an education campaign can be undertaken. Long-term impacts on the hatchery’s operations will be gauged going forward.