Features
First steps for slipper lobster culture in the Philippines 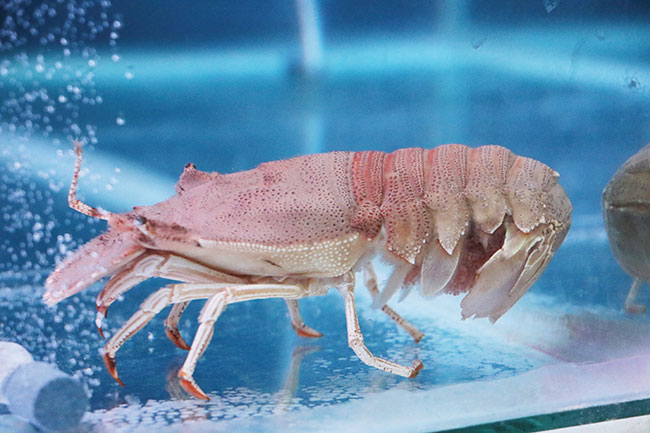 The slipper lobster broodstock is so called because of its flattened carapace. photos: Rex Delsar Dianala

Slipper lobster (Thenus orientalis) has been identified as one of the Philippines’ prime candidate species for aquaculture. Ongoing studies are headed toward launching a new lobster farming industry in the country and rest of Southeast Asia.

The species has traits that are easy to appreciate, particularly vis-à-vis the more popular spiny lobster (Panulirus spp.). “Slipper lobsters have shorter larval stages compared to the larval stages of the spiny lobsters. Larval stages, or puerulus stages, in spiny lobster are quite extensive, lasting over a period of six to 12 months, with up to eight to 11 moltings. “On the other hand, slipper lobsters undergo four phyllosoma stages over a period of only 28 to 35 days,” Shelah Mae Ursua, project leader at the Southeast Asian Fisheries Development Center/Aquaculture Department (SEAFDEC/AQD) in the Philippines, told Hatchery International the species’ traits that make it ideal for aquaculture.

Shorter larval stages, she pointed out, lead to short culture period compared to spiny lobsters. For slipper lobster, hatching to reaching market size takes between 14 to 16 months. For spiny lobster, it is 22-24 months.

“The slipper lobsters may be smaller in size compared to spiny lobsters, but the shorter culture period will make up for it in terms of economic returns,” said Ursua.“Hardiness of the slipper lobster in the larval stage and fast growth in the juvenile stage are advantages over the other lobster species.”

This is one of the traits that convinced her to focus on the species for the lobster research project.

The name of the lobster is descriptive of its flattened carapace. Slipper lobster is one of the few endemic and edible lobsters in the Philippines and has a very accessible price. It could easily cost only a third of the price of spiny lobster.

The research on propagation and culture of slipper lobster reached a milestone in September 2021with the first spawning and hatching, about five months since egg-bearing specimens were brought over to the experimental facilities. This was followed by several more hatching events.

One of the latest happened in June 2022. This was videotaped to document the hatching behavior, which SEAFDEC/AQD uploaded in its FB page. The broodstock was shown hatching “tens of thousands of baby lobsters,” looking like floating particles. This offered a viewing experience that was previously limited to only a very few people.

The research project is expected to be completed in 2024, as funded by the Government of Japan Trust Fund.

Providing updates, Dr. Leobert de la Peña, the Research Division head at SEAFDEC/AQD, said, “The slipper lobster project just started the hatchery phase with the development of protocols for the live transport of the breeders, spontaneous hatching of the phyllosoma larvae, and larval rearing under tropical conditions. Slipper lobster breeders already hatched out their phyllosoma larvae in the hatchery facilities of SEAFDEC/AQD. The larvae are being reared in UV-treated seawater and fed with algae (Tetraselmis, Nanochlorum), rotifer, and Artemia nauplii.” 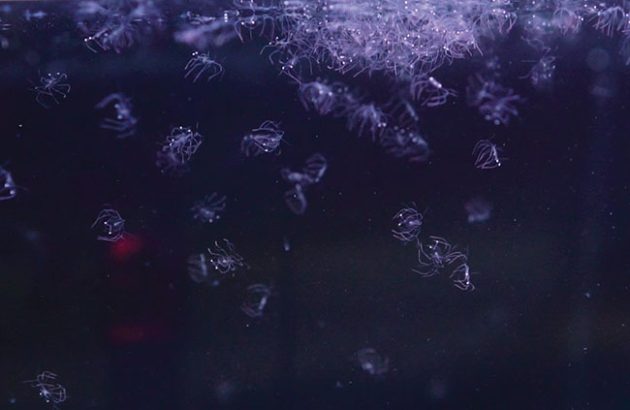 Challenges
Ursua and her team are currently facing the challenges of rearing of the phyllosoma larvae, the most critical stage of hatchery production. “Various factors are being considered such as type of feed, feeding scheme, water management, type of holding tank, and light intensity,” she said.

“Proper hatchery protocols are crucial due to the translucent body of the larvae which makes observation, and even cleaning the tank bottom, challenging. Furthermore, the larvae have very delicate swimming legs that requires care in water management to minimize disturbance of the water column. Tetraselmis, Nanochlorum, Brachionus sp., Artemia nauplii are used as feed during larval rearing.”

In the hatchery phase of slipper lobster culture, Ursula stressed the importance of using UV-sterilized seawater and maintenance of optimum physico-chemical parameters: temperature at 26 to 29 C; salinity, 30 to 35 ppt; dissolved oxygen at 6.5 mg/mL; and ammonia-nitrogen, < 0.1 ppm.

Lobsters are still usually wild-caught in the Philippines. The government has to intervene in 2020 due to unsustainable practices, leading the focus on culture.

SEAFDEC said growers rely on harvest of wild-caught juveniles, a government-regulated enterprise. As such, commercial production of seeds is much needed.

“The slipper lobster has a very high commercial potential product in the Philippines for export,” said SEAFDEC/ AQD Chief Dan Baliao. “The development of hatchery technologies to produce the seeds and, eventually, the commercial feeds for slipper lobster are expected to provide the needed juveniles for grow-out culture.”

Hatchery technology development will be dove-tailed by the development of grow-out technology, he said. SEAFDEC/AQD conducts regular training courses for government and private entities and internship programs for students to disseminate technologies. Requests for trainings and internships are sent to the Training and Information Division of SEAFDEC/AQD. Lobster growers in the Philippines are keeping a tab on the project progress.