Robins MacIntosh, senior vice-president of Charoen Pokphand Foods (CP Foods) in Thailand, talked about building shrimp aquaculture in Thailand, as his plenary address at the Aqua 2018 conference in Montpelllier, France. 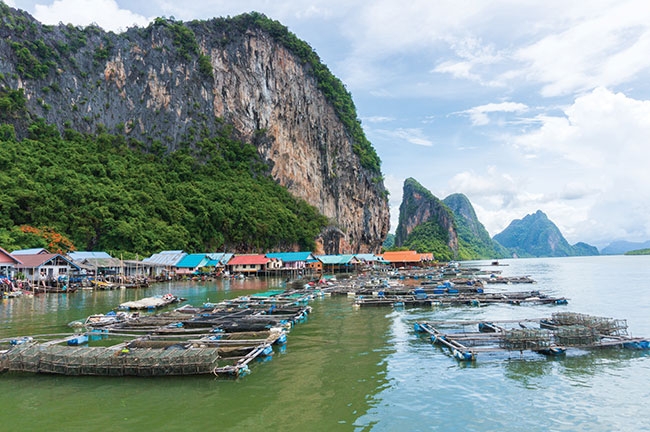 “CP was founded on the principles of innovating technology to produce food more efficiently, of improving the livelihoods of Asian people and of providing healthy, delicious and affordable foods for the world,” says MacIntosh.

“If we look at the (shrimp) world in 1986 there were only 200,080 tonnes being produced,” says MacIntosh. The company business plan was primarily to make local farmers successful, he explains. “So along with that first feed mill in ’86, they developed an R&D center that had nutrition labs, microbiology labs, pathology labs and demonstration farms, to show Thai farmers how the modern technology would work.”

The company hired technical people to go out and work directly with farmers with these new feeds. In 1988, they began publishing the shrimp newsletter in all the local languages.

“The newsletter gives famers up-to-date information on what was the best techniques for farming at the time,” says MacIntosh.

“But CP didn’t do this alone,” MacIntosh points out.  A strong Department of Fisheries works with farmers and industry to help them improve, he says.  There are also strong business associations so that feed mills, food processors and farm groups have someone looking out for their interests.  And a strong university system creates a brain trust for the industry.

“We get farmers and farm managers, company managers and scientists from the universities,” notes MacIntosh.  “And it is the research labs that often add the extra component to keep us at world-class levels.”

“But the true signal of a great company is one that can overcome difficulties,” says MacIntosh. “There is not a culture at the scale we run, that does not have difficulties.”

“When I left Thailand in 1990 the average size coming out of ponds was 30 grams,” says MacIntosh. “When I came back to work for CP in 2000, they were 17 grams. You also found a thriving antibiotic business, farms and shrimp were sick.”

“I knew it was the same thing I had seen in South America,” says MacIntosh. “The wild populations they had brought into farms had become infected with sub lethal viruses.”

The solution, he says, would have been to develop a specific pathogen-free (SPF) monodon, something that would take seven or eight years.

“So we brought in the SPF vannamei (Litopenaeus vannamei) in 2002,” says MacIntosh. It wasn’t the first time vannamei had been brought into Asia, he notes. “But previous tries had failed because although the SPF came in, there was no manual to show the farmers how to do it. CP brought the complete package to the farmer.”

The hatcheries in Thailand in early 2000s were not very bio secure, MacIntosh explains. “We had to redesign the hatcheries to make an SPF hatchery, with modularization, new algal systems and most important, closed maturation for domesticated stock,” he says.  “The maturation facilities used clean feeds and kept the stock clean so the post larvae going to the farmer were as clean as the broodstock I brought in.”

Hawaii was the nearest source of SPF broodstock, says McIntosh. “It’s a relatively long ways away and we could only get small amounts at a time. We had to develop our own SPF breeding program in Thailand.”

“We set up a nucleus breeding program and we put a genetics program on top of it because CP Foods had learned long before, with other livestock, that genetics and broodstock would be the base of any success that we would have.”

“We developed a program that runs 3,000 families a year and we have a pedigree,” says MacIntosh. “Every shrimp that came into the program, from the founders at the very beginning to today, we have a complete record on.”

“Even though we may spend $10-$12 million a year in operating the genetics program, if we look at the billions of dollars in return from this program, it has been a cheap investment,” says MacIntosh.

With that faster growth rate, the cost came down, MacIntosh notes, but there was also concerns with robustness and survival.

The farms also had to be redesigned. The existing farms were open systems, with a low horse power paddle wheel for the monodon, he says.

“One of the first things the farmers learned is that vannamei don’t die,” says MacIntosh. “In 2000, they were used to only 30 percent survival with monodon so they might overstock two or three times.”

“Farmers had to learn that with this new shrimp you are going to get high survival and we needed to increase the aeration,” MacIntosh points out. “But the most important thing we did was close the farms, so they were not exchanging to the environment and put in sludge ponds to collect waste.”

“We thought we were doing pretty good.” In fact, in 2010, MacIntosh recalls giving a presentation that indicated they have become sustainable.

“But then in 2012, EMS hit and we were not sustainable,” MacIntosh says. “We had to study this new issue because the old bio security didn’t work.”

Research at the University of Arizona supported the company’s own work and they developed a toilet to remove sludge, molts and excess feed almost instantaneously, he explains. “In doing so, the bacteria levels never got to the level to kill,” says MacIntosh.

“We also looked at the genetic aspect and found there is heritability to the toxin tolerance so we started an aggressive program to breed tolerance into the stocks,” says MacIntosh. “Today we have an 85 or 90 percent tolerance level and we really do not see EMS or AHPND in Thailand.”

“And this is what we are now calling sustainable intensification,” says MacIntosh. “We can create more shrimp on a smaller footprint.”

“Next on this path of evolution, we are working to build indoor shrimp farms,” says MacIntosh. “It just allows us more control.”

CP has played a major role in introducing white shrimp technology to countries such as China, Indonesia, Vietnam, Malaysia, India and the Philippines, says MacIntosh.

“It was the work we did in teaching farmers how to do it right and bringing in the correct stocks that has created the large increase in world shrimp today.

“We find other countries coming to Thailand to learn as well. Being in Thailand has been great because I don’t have to go anywhere to meet the experts. They come to Thailand, so its been a great central place to locate as a shrimp person,” MacIntosh says.