Murray cod (Maccullochella peelii peelii), with its densely marbled flesh, has a strong following among Chinese and Vietnamese communities and a long-standing reputation at the top end of the seafood market. 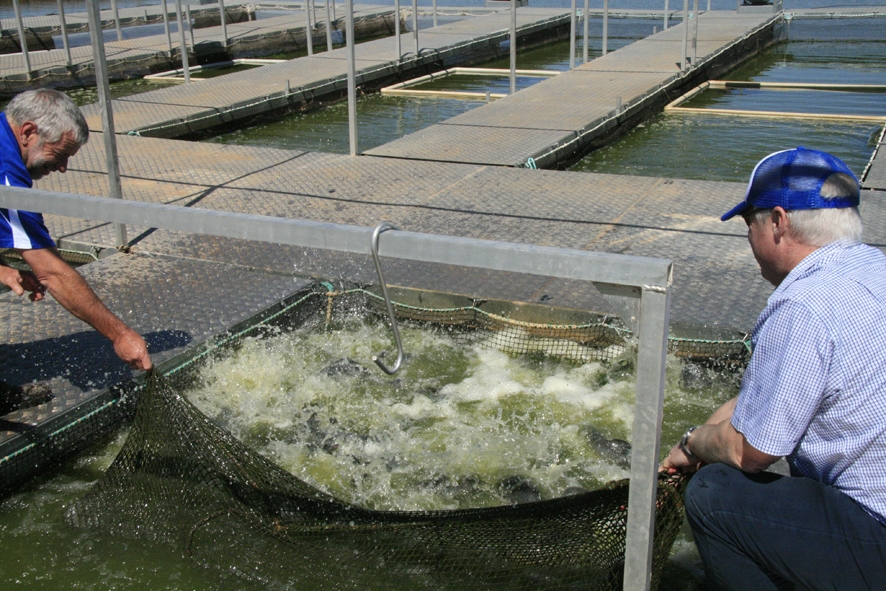 Ross Anderson is the company’s Chairman. He explained how MCA saw itself developing Murray cod as a mainstream aquaculture species in Australia, and overseas.

“We see the species as an excellent prospect for aquaculture because they’re a high quality premium table fish; they don’t grow in any other river system in the world and there’s no wild catch fishery to compete with. We’re situated in the Murrumbidgee Irrigation Area (MIA), which gives us access to infrastructure support, reliable power supply and a skilled workforce.

MCA designed and built the system. The advantages are twofold. First, the systems suit their specific practices, and second, they have easy access to spare parts and maintenance.

Another key has been the experience brought in to the company when acquiring the grow-out and hatchery assets. Hatchery Manager Ian Charles has had over two decades of aquaculture experience, and Matt Ryan and Roger Commins have been developing their cage culture system and establishing a market presence since 2012.

Pond water is sourced from the irrigation system that is ultimately fed from the Murrumbidgee River, and the nursery is supplied from the local town water supply, and dechlorinated before entering the RAS.

The 1,200m2 insulated nursery has ten 5,000 litre tanks and 24 x 10,000 litre tanks, and can rear 300,000 fingerlings per year. The cleaning process is straightforward: water passes through a drum filter before going through the de-gassing and nitrification towers. It is then treated with ozone and re-oxygenated. Total water exchange at maximum load is once every 45 minutes. DO level is maintained at 80-90% saturation. Daily water replacement is around 5-7%. The nursery water temperature ranges from 15ºC in winter to 27ºC at the peak of summer.

Weaned, 1.2g fish are brought to the farm from the hatchery and after 10 days in quarantine are stocked into the RAS nursery until they are 100g. This takes 5-6 months for the top third fastest growers. The remainder take 7-8 months. Juvenile fish are graded regularly so that by the end of the process, each tank contains a cohort of even sized cod. No further grading is required once they leave the nursery. When the fish have reached their target weight, they’re moved into the grow-out ponds.

Since MCA has its own hatchery, the cost of seedstock is absorbed into the overall operational expenditure, and it is during the nursery stage that weak performers – as high as 25-30% – are identified and culled before too much has been invested in them.

“This may seem a high number,” says Matt, “but we’re dealing with fish that are just one generation out of the wild, and it’s the cheapest form of genetic selection at this stage. Once our selective breeding program kicks in we expect to see a dramatic improvement We know it will be an ongoing cost, but the efficiency we gain will be well worth the time and money put into it. And it places us in a position of advantage as far as the industry is concerned.”

Species-specific Murray cod diets have yet to be developed. Meanwhile they’re using a range of Australian starter and grow-out barramundi diets that give commercially acceptable feed conversion results ranging from 1:1 to 1:2.1.

The company has stocking capacity for 300,000 fingerlings on its Bilbul farm and another 150,000 on the farms of its contract growers. Another 300,000-capacity module currently under construction will be ready for stocking in 2018. They expect to be turning out 1,000 tonnes of premium product by 2021.

Market demand determines the harvest size. Fish from 800g to 1kg are required for the plate size market; and from 2.5-3kg for the filleting market. Plate-size fish are ready in 12 months from being stocked. They work on growth rates of 800-1,000g per year once the fish are in the cages. The larger fish can take up to two years. Stocking loads are managed as the numbers of fish are reduced by harvesting for sale as the market demands.

Ross said market appeal had been established by the quality of the flesh and colour of the fish. “Those grown in recirculation units tended to be dark in appearance. Fish that have been finished in the outdoor cages have the traditional Murray cod colouration and the pristine white flesh for which they’re renowned. Overseas buyers who have tried the product like its high fat content and, also the sustainability, traceability and the fact that it’s antibiotic-free.”

All the water that comes onto the farm stays on the farm. Nutrient-enriched waste water is used in the company’s agricultural enterprises; no water reaches natural waterways.

What of the future?

What does the future hold? Company Chairman Ross Anderson summed it up: “When you look at all the inputs, in terms of the advancements possible in process, nutrition and genetics, I wouldn’t be at all surprised if the productivity of the fish in a decade isn’t double what it is now. As we continue to build our focus on quality and traceability this will become a luxury product gracing the tables of [the] world’s best restaurants.”

The property Ian owned had a shallow aquifer bore and a license to extract 130ML of water from the Murrumbidgee River. He took a two-year aquaculture course at Grafton TAFE (Technical and Further Education) and started growing fish. This in turn led to his Silverwater Native Fish

The changes in his operation have been significant. “Being a single species hatchery now has streamlined our operation in many ways. Many time-consuming activities have been eliminated: bagging and boxing fish for farm dam customers; time spent attending field days and dealing with export orders are all things in the past,” Ian said. “We’re much more efficient now, and these efficiencies will allow us to concentrate on expanding hatchery production.”

His 37 ponds cover 6.7ha and range from small plankton production ponds to deeper, larger broodstock ponds. The bore water comes up at 19ºC; the river water temperature varies seasonally; pH is low: 6.8 and 7.5 respectively. Ian has never found low carbonate hardness to be a problem and doesn’t lime his ponds.

Spawning drums are put into the ponds in early September, and breeding usually gets underway in the last week of September when pond temperatures reach 16-18ºC.

The eggs are left on the screens in the drums and when they hatch, the larvae are syphoned off and put into trays for the 7-10 days it takes them to absorb their yolk-sacs. Water is a constant flow-through and heating is not necessary at that time of the year. The larvae are then moved to larger tanks and fed live Artemia for 2-3 weeks to build up their strength before they’re stocked into the plankton ponds.

The plankton ponds are fallowed over winter and harrowed once they dry out in spring. They’re flooded a fortnight before the fry are due to be stocked and a plankton bloom is generated by using a mixture of lucerne chaff and molasses. Ian looks for a healthy zooplankton population of the larger pond life such as copepods, cladocerans, chironomid larvae and bloodworms. The ponds are aerated at night and sometimes during daylight hours to break up the thermocline. The bloom is monitored over the six-week period and more fertilizer is added should the need arise.

The fish are harvested at 35-40mm and undergo the three-week weaning process. Ian said they can achieve a 90% success rate.

When the fingerlings average 1.2g they are ready to be shipped to MCA’s Griffith nursery facility. “The success rate and high turn-off weight [are] due to high water quality,” Ian said. “If you have poor water quality you have poor feed uptake, and in rapidly metabolizing juvenile fish; that’s when your troubles begin. It’s important the fingerlings get off to a flying start by the time they get to the nursery.”

MCA has kept a few of Silverwater’s more rewarding market outlets: some long-standing commercial clients have been retained, and they have a significant contract with Fisheries Victoria for public water stocking.

The public water fingerlings must be bred from wild-caught stock to ensure genetic integrity and biodiversity; however, they have already identified and set aside better performing fish for a future breeding program based on farming KPIs. MCA have plans to build on these family lines as the foundation of a scientifically-based genetics improvement program that will be an important division of the company’s ongoing R&D.