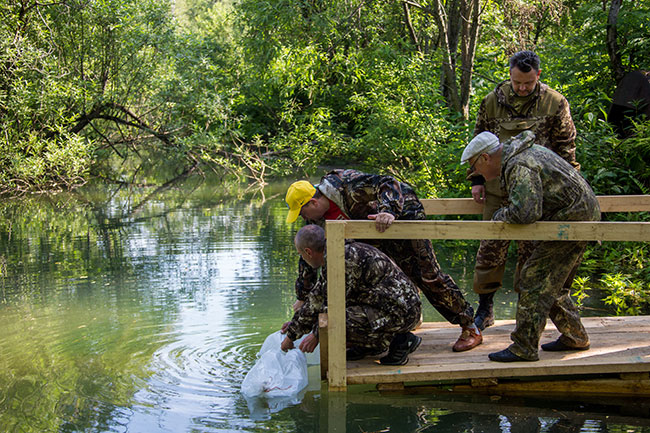 Some 20,000 sturgeon fingerlings were released to the Narva River in efforts to revive the population of the species in the Baltic Sea.

The Estonian Environmental Center (EEC) has released the first batch of 20,000 sturgeon (Acipenser) fingerlings into the Narva River. This is the first step in an ambitious project aimed to revive sturgeon population in the Baltic Sea, said Meelis Tambex, a fish biologist with the EEC.

Sturgeon previously dwelled in the Baltic Sea, but had since gone extinct because of the cocktail of anthropogenic factors, Tambex said. The first batch of sturgeon fingerlings were purchased from a hatchery in Germany. Local environmentalists, however, hope that in the future local hatcheries in Estonia would also able to participate in the campaign to bring sturgeon back to Baltic.

The Estonian government has decided to focus on sturgeon enhancement as recent research has shown that the spawning ground for salmon (Salmo salar) had been destroyed by nearby hydro power plants. Breeding salmon fingerlings for release into the Narva River would be a useless exercise as they would have no chance to grow and populate in the wild, according to Tambex.

“The spawning grounds of salmon and sturgeon are slightly different. Sturgeon can spawn in the Narva River, while salmon can’t, as its main spawning site has been destroyed. It is now a dry river bed,” Tambex said.

In a news report from Estonian news outlet ERR, a local fisherman expressed doubt that the sturgeon fingerlings released in the river would have a high chance of survival in the Narva River and make their way to the Baltic Sea.

“I think that most of these fingerlings in the end will be eaten by predators, because there is a lot of chub (Leuciscus cephalus). We catch it using gudgeon (Gobio) as bait, and it is exactly as small as the released fingerlings. You see, predators don’t care whether this is a sturgeon or not; everything will be gobbled up,” the local fisherman said.