Features
Essentials for a successful grade 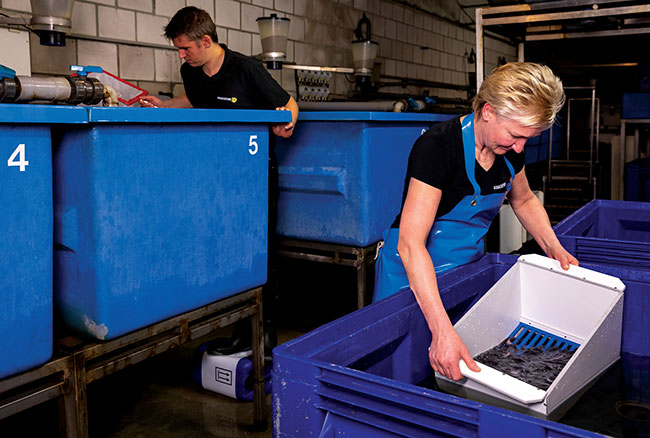 While stressful for the fish, if done properly, grading is a safe process that can be done without mortality Photo: Aquaculture ID

Grading is an essential farm task at any production facility, especially for juvenile fish. Grading, which is the sorting of fish into groups by size, serves three major purposes:

Grading is a stressful event for the fish but if done effectively, grading is very safe and can be done without mortality. Proper setup, inspection and monitoring are key to ensuring a successful grade.

Breaking the feeding hierarchy
Fish in a tank will set themselves up in a feeding hierarchy. More dominant fish will take the best positions with the best access to feed, enabling them to grow faster. The farmer is always trying to outflank the feeding hierarchy by maximizing feed availability and ease of feeding for all fish in the tank, wanting to feed their stock evenly to achieve uniform-sized fish. However, there is only so much the farmer can do to outflank the hierarchy; genetics play a large part in growth, and big fish that emerge will continue to be the big fish. The coefficient of variation (CV) is a common way to describe the size variation in a tank. As time goes on, the CV in a population- the size variation- increases.

The only way to break the feeding hierarchy is to sort, mix or split the fish, and force the fish re-establish the feeding hierarchy. Grading is a good way to reform groups of fish to maximize feeding efficiency across the population. Each group created by the grade will establish a new hierarchy, where competition for feed between individuals is much more even. Because the fish are close to the same size, fish that were once marginalized, or had somewhat restricted access to feed due to larger fish in the tank, suddenly have easier access to feed because their main competitors have been removed. The CV of the tank goes from largest to smallest. Overall, more fish have access to feed and therefore, the biomass of the fish will grow faster and end much higher, than if the group was left ungraded.

Reducing cannibalism
The rise in CV in a group of fish is of particular concern to farmers raising species with cannibalism issues. Voracious fish with large mouths such as barramundi will prey on each other with little size variation between them. There are many strategies/techniques producers use together to reduce cannibalism, one of which is frequent grading, up to every other week. The idea is to keep fish of the same size together and minimize the number of fish available to be eaten by larger tankmates.

Grading setup and operation
Regardless of the grader type you use, proper setup is the key to successful grading. As so many fish are running through the grader, it is extremely important to make sure everything is smooth in operation and in fact. All surfaces, transitions and chutes should be checked for sharp edges and burrs. A small burr can damage the thousands of fish flowing over it, if not found and addressed. Securing the grader, water supply, and fish lines will prevent shifting during operation and prevent hose slips and fish losses. Ensure the grader is set on the proper angle (for a bar grader) to allow the fish to travel easily, but not too quickly, through the grader.

Choosing how to set the grader size is the most difficult task in grader operation. Experience is the best way to determine how your grader needs to be set, otherwise it can be a lot of trial and error. The best advice is to make very small adjustments. Trying to set the grader for the first time usually ends up very time consuming as adjustments become constant, while the operator chases the right setting. The process is usually as follows: the grader is adjusted, some fish are run through, average weights and number of fish in each grade are examined, adjustments are made, some fish are run through etc., repeat until satisfied. After the proper setting is found, many farmers will place a mark on the unit to identify where to set it for fish of the average weight in the future.

A good way to judge the flow is to look at the silhouettes of the fish flowing through the flex hose to see how ‘thick’ the flow of fish is. If it’s difficult to see, backlighting the hose with a halogen light can help. Watching the grader in operation will also reveal if the speed is too fast or slow. If the flow is set too fast the operator can see the fish stack on top of each other while they travel the grader, instead of contacting the grading surface. Close attention should be paid to how fish are coming out of the return lines to ensure they are not damaged and their ‘landing zone’ in the tank doesn’t have them hitting the tank walls or bottom.

After grading finishes for the day and before breakdown, ensure the grader and all the lines are flushed out with high velocity water. Fish can get stuck in the lines and in the grader, especially at low points in gravity-fed return lines. If done properly, there should rarely be a mortality during grading, fish are much more likely to die from human error than being properly graded.