In 2013, the European Union’s food sector was a major consumer of energy, accounting for 26 per cent of ﬁnal energy consumption. Agriculture and livestock production were responsible for 33.4 per cent of the energy costs associated with food consumed in the EU. 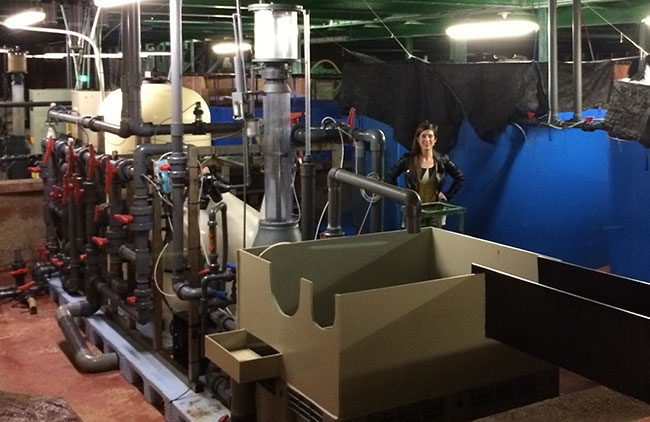 Farming is one of the major causes of environmental problems, and aquaculture can claim its share of the blame.  Public criticism has pushed the sector to find acceptable practices from environmental, societal and economic perspectives.

Efficient producer
Farmed seafood is a very efficient protein source in terms of resource use, water, feed and land utilization. Its environmental footprint is significantly smaller than terrestrial livestock and its feed conversion is much more efficient. It can be argued that the answer to food security and ocean conservation is in sustainably farmed seafood. However, the lack of space for expansion limits fresh water availability, and pollution concerns are considered obstacles for further enlargement of conventional cage-based and ﬂow-through aquaculture systems.

Fish escapees, biosecurity, mangrove destruction, wildlife interactions and product traceability have been some of the problems related to aquaculture. So, how can fish be produced in a sustainable way? This author believes that RAS is a clear choice.

Benefits of RAS
RAS poses few risks to the environment and can be established in many areas. It can be used when water availability is restricted: enabling 90 to 99 per cent of water to be recycled. RAS allows the operator greater control over the chemical, physical and biological water quality parameters, enabling optimal conditions for ﬁsh culture. There’s little need for antibiotics; the fish can be fed more effectively than those in net pens and waste can be pumped out of the facilities and taken to composting sites. Also, there’s zero interaction with wild counterparts.

Growth of RAS
In recent years the number of RAS farms around the world has steadily increased. According to a research conducted by this author in 1986, 300 mT of fish were produced in Europe while in 2014 the number was over 15,000 mT. During the same period, the number of RAS installations grew to around 360 in the U.S. and Europe. Norway and Canada represent important RAS industry countries, mainly for salmon smolt production, while China is increasing its yearly production with the construction of new, large indoor RAS facilities. This increased number of RAS farms around the world coincides with an inherent use of energy and its consequences for both companies and the environment, regional and global.

Energy concerns
In 2014, this author worked with the  Monterey Bay Aquarium’s Seafood Watch program to bestow a “Best choice-green choice” sustainability rating on RAS systems around the world. During that process of sustainability evaluation, one aspect of concern that came to light was the high energy requirement of RAS systems and the need to make improvements in this area.

Having water in continuous re-use and constant pumping can lead to elevated electricity costs. Thus, this high-energy requirement is a challenge which increases operational costs in terms of energy, equipment wear-and-tear and ensuing operational and management costs.  On-farm electricity consumption could affect both environmental impacts and economic costs of a RAS, reducing the farms’ sustainability.

Renewable options
New renewable  sources of energy like solar, wind and geothermal, contribute about two per cent of the present world’s energy use. In aquaculture, and mainly in RAS companies, this should be an important consideration when designing or redesigning a production system. The interest in using renewable energy sources or waste from other industries should be part of the solution to further decrease the environmental impacts of RAS.

In the long term, the economic benefits would be tremendous for the companies involved. This change in mindset would also yield societal improvements, more efficient systems and thus, more sustainable global fish production systems.

The energy sources to be employed at a farm will be dictated by the system’s location and its accessibility to the energy sources. Thus, the location of RAS operations, sometimes in remote areas, may make it easier to use renewable energy. We must take advantage of such opportunities.

You have to measure it to improve it. So, what do we measure and how do we measure it? This article is the first in a series to address energy sustainability issues with RAS. Look for future articles in upcoming issues of Hatchery International and RAStech.

Maddi Badiola, PhD, is a RAS engineer and co-founder of HTH aquaMetrics llc,(www.HTHaqua.com) based in Getxo, Biscaye, Basque Country, Spain. Her specialty is energy conservation, lifecycle assessments and RAS global sustainability assessments. She can be contacted by email at mbadiolamillate@gmail.com