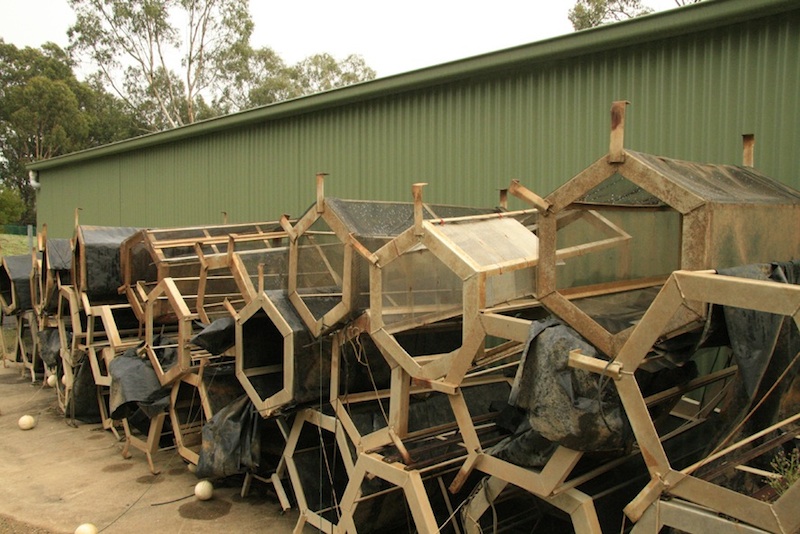 In this second instalment about the Snobs Creek Hatchery

In the last issue of Hatchery International we described the Snobs Creek program for introduced salmonid species, but the hatchery also has programs for indigenous Australian species, including the two most highly prized (and most endangered) freshwater angling fish in South-eastern Australia. These are trout cod (Maccullochella macquariensis) and Macquarie perch (Macquaria australasica), both found in the faster running reaches of the Murray and Goulburn River systems that form part of the Murray Darling Basin; Australia’s main drainage system.

The status of Macquarie perch and trout cod in Victoria has been declining since the arrival of Europeans in the 1830s. Initially the land was grazed in large farming leases, but the discovery of gold in 1850 triggered a boom that saw the land cleared for timber and for agriculture. The once clear upland streams became muddy sluices, seriously reducing fish numbers.

Fisheries Victoria has had a reclamation program running since the early 1980s. Trout cod have been successfully spawned since then, but it is only recently that the Department has been able to regularly stock Victorian waters with Macquarie perch. Hui King Ho, under the supervision of the station’s Production Supervisor, Steve Vidler, leads the team capturing and conditioning the broodstock, and running the induced spawning program.

Macquarie perch make an upstream spawning run in late October – early November when water temperatures approach 15°C – and the rivers are in full spate and present a significant challenge. Once spawning is completed the parent stock feed their way back downstream; the juveniles follow later.

Broodstock for the Snobs Creek breeding program are collected from two sources – the Yarra River and Lake Dartmouth. Several collection methods are used: electro-fishing in the Yarra, and angling at Dartmouth. They also set drum nets at both sites as a backup. Spent Yarra broodstock are returned to the river, while the Dartmouth fish are brought back to Snobs Creek and become part of the broodstock held on the station. All potential captive stock are micro-chipped and fin-clipped to determine genetic structure.

There is a four-week window in which to catch the gravid females. This is not so difficult in the Yarra as the river is easily accessed. The water also warms up sooner. Dartmouth on the other hand is high in the ranges and access is difficult. The weather is also unpredictable. Hui said, “Last year we got up there in early November. It snowed. The water temperature dropped to 10°C.” At the end of the month the water was 17°C, and they made their collection in a couple of hours.

Typically a technician goes up a few days before to reconnoitre, and they receive reports from local anglers, who show a good deal of interest in the project, in fact the Native Fish Association (NFA) has been associated with the collection of broodstock and the actual breeding program since 1981.

The fish collected are inspected to determine condition (based on colour, size of belly and milt quality), and those selected are transported to the hatchery in insulated containers. Upon arrival, females are anaesthetised and gently cannulated to determine egg suitability to undergo hormone therapy.

Ovulation is facilitated using Ovaprim at a rate of 0.5ml/kg. Male broodstock do not require chemical stimulation. Generally, ovulation occurs 42 hours after hormone induction. Eggs are stripped and dry fertilised with sperm. Genetic diversity is maintained: Yarra males are spawned over Dartmouth females.

Fertilized eggs (2mm) are gently aerated in cone-shaped incubators to keep them pelagic. Dead eggs are syphoned off. At 19-20°C incubation ranges from five to nine days. As the larvae hatch they are removed and suspended in a 50µ mesh basket in a trough with a water exchange flow of 3 l/min. Separate baskets keep the ‘age’ cohorts apart. After five days the larvae have exhausted their yolk sacks, their jaws are starting to gape, and they’re fed rotifers and Artemia nauplii, eight times a day.

Once the hatch is underway, the plankton ponds are flooded. The larvae are introduced 10-12 days after flooding, and the fry are harvested 7-8 weeks later at 25-30mm. Hui said they were more fragile than Murray cod or golden perch fry at the same size. Cold weather can be a problem: lower temperatures reduce plankton productivity and it can take several days to recover momentum.

Saprolegnia can also be a problem. The water is filtered down to 0.2 µ using specialised ceramic water filters, which was relatively expensive ($100,000) but has been successful. “Once you have whitespot in the system,” Steve said, “the eggs can’t be treated. By removing the spores, we can protect the eggs and larvae from infection, allowing us hatch rates close to 100%.”

So far they’ve been unable to wean the larvae (or fry, for that matter) onto a dry diet. “A cold snap can blow your schedule to pieces,” Steve said. “We’ve had to hold Murray cod back in the nursery and hand feed them for a couple of months … due to reduced food production in the plankton ponds. We’re basically a commercial section of Fisheries … focused on output; which restricts our ability to devote too much time on the development work we’d like to do.”

That hasn’t precluded them from experimenting: Hui has tried mixing dry food with ground worms and injecting it into the water with a syringe. He’s tried frozen Daphnia and other zooplankters, ground beef hearts, anything imaginable and within reach. “The problem seems to be the lack of animation; they only get excited about live food,” he said.

In nature, trout cod share the same habitat as Macquarie perch, however they spawn at 14°C, giving them a few weeks head start over juvenile Macquarie perch. Thus the trout cod program differs in several respects: broodstock is held on the station in earthen ponds, much the same as for Murray cod. In fact the spawning protocols are quite similar. (The perch, by contrast, are held in temperature-controlled tanks and subject to seasonal light simulation.) Trout cod broodfish are fed live food such as yabbies and smaller native fodder species, including frozen carp. They are fed twice a week in the warmer months, tailing off to once a week when temperatures fall below 18°C. They don’t feed during June and July, nor from October to February, the station’s busy spawning season.

Steve said they get one spawning from each female due to the shortness of their season. They start examining the broodstock when water temperatures approach 18°C, and are currently collecting naturally spawned eggs from nesting boxes in the ponds. With only a few fish available, there’s some concern about genetic diversity. Next season they’ll strip by hand using genetic markers to select the breeding teams. Diversity in the breeding ponds is maintained by employing a five-year rotation program of the broodstock teams.

The adhesive eggs are placed in flow-through troughs at 19-20°C, and hatch in 8-9 days. By 6-8 days post-hatch the yolk sacks are exhausted and the lower jaws have started to function. They get a first feed of Artemia in the hatchery and then go out to the plankton ponds. They’re harvested after 6-8 weeks and released into selected upland conservation waters. Some go to impoundments at Beechworth where their performance and environmental impact can be monitored. Fry can be as small as 0.6g in a poor plankton season, but the typical mean size is 0.9g-1g, or about 40mm.

Snobs Creek has an excellent water supply, but the trade-off is the mountain climate and the short summer season. Hatchery and pond space has to be prioritized. The trout cod are spawned immediately after the Macquarie perch. With the Murray cod, golden perch, silver perch and catfish following behind them. Trout cod are fed once, and are then transferred to the plankton ponds.

Over the last few years the department has released in excess of 100,000 Macquarie perch and 50,000 trout cod, (both increasing annually), whilst increasing the production of Murray cod to more than 500,000 per year. More importantly, broodstock has been collected and protocols established so these two endangered species can be re-established in their native habitat. They present the fisherman an angling challenge that rivals that of the introduced salmonids.

The Macquarie perch has equal fighting prowess, if not the muscle of a 5kg trophy trout cod, but offers a challenge of a different kind. They can be taken on a wet or dry fly, a lure as well as bait. They have a delicious white flaky flesh. Thanks to the work of the Snobs Creek team, and the foresight of the Victorian government, anglers will be able to pit themselves against these two trophy fish well into the future.

The ceramic tubes of the Legrand water filtering system that removes Saprolegnia spores.

One of the plankton ponds at Snobs Creek during the winter fallow period.

A by-product of plankton production: large yabbies (Cherax destructor) growing in the ponds.