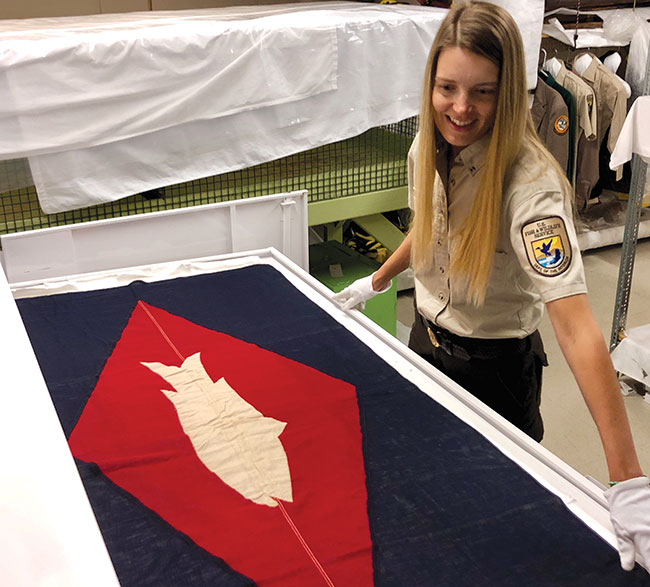 Channeling William Faulkner: “The past isn’t dead. It isn’t even past.”

The past is present at the D.C. Booth Historic National Fish Hatchery and Archives in Spearfish, South Dakota, USA. The facility is dedicated to preserving images, documents and objects related to fisheries conservation. The archive is located at one of the oldest operating hatcheries in the U.S., which still produces trout.

Barton Warren Evermann, chief of scientific inquiry of the U.S. Fish Commission (the forerunner of today’s U.S. Fish and Wildlife Service created nearly 150 years ago in 1871) came to the Black Hills in the early 1890s to assess the area’s fisheries.

On what now seems like a pittance, Congress granted Evermann in August 1892, “for investigation and report, respecting the advisability of establishing fish-hatching stations at suitable points in the States of South Dakota, Iowa, and Nebraska, $1,000, or as much thereof as may be necessary.”

We don’t have an accounting of what was spent, but he noted what streams he seined, the fishes he found, and with whom he traveled.

And he didn’t waste time: “Oct. 6. Began work at Deadwood, S. Dak. Oct. 7. Drove to Spearfish and examined Spearfish Creek and numerous springs in vicinity,” states his 1894 Report upon the Fishes of the Missouri River Basin.

Spearfish Creek
His field work ceased with the onset of winter and resumed in June 1893. Then over the next two months Evermann and crew examined not only potential hatchery sites, “but included an examination and study of the physical and biological features of the waters, with special reference to the species of fish and other animal life they already contain, and their suitability for stocking with other species of food-fishes not indigenous to them.”

The waters of the Black Hills were thoroughly vetted by the scientist. It was Spearfish to which Evermann returned. And he tells Congress why:

“Spearfish Creek – This is by far the most picturesque of all the streams of the Black Hills seen by us. We examined Spearfish Creek at the town of Spearfish where it was 30 feet wide, one foot or more deep, and with a swift current. The bottom was gravelly and there was considerable vegetation along the banks. From it we took brook trout, Jordan’s sucker, and western dace. The stream is a fine one, indeed. The bulk of its water comes from the hills, but even at Spearfish there are some fine springs. If fish-cultural work should ever be undertaken at any place in the Black Hills, the most satisfactory natural conditions could probably be found here.”

And so it would come to pass. By July 1899, Spearfish National Fish Hatchery situated about a mile from the bustling downtown, was operational with 17 ponds and a handsome hatching house designed by U.S. Fish Commission Architect and Engineer, Hector von Bayer. It was neatly tucked in narrow Ames Canyon. The hatching house sat in a commanding position above the creek. DeWitt Clinton Booth, a New York native likely named for his home state’s former governor and U.S. senator, took charge of the new federal fisheries facility.

Spearfish National Fish Hatchery produced trout. Booth and crew, sometime attended by their families, made arduous annual forays into Yellowstone National Park to collect the spawn of “black-spotted trout,” as cutthroat trout were called at the time. The fertilized eggs were returned to Spearfish for raising and stocking in the Black Hills streams and beyond. These trips were made by rail and by wagon, hauling most of their physical needs, including boats and nets. Other species of trout would come from the Spearfish hatchery: brook trout, brown trout, rainbow trout, lake trout.

Dry spell
The quality of the spring waters that Evermann found did not last. The springs dried up about 1940 and the U.S. Fish and Wildlife Service looked for reliable water nearby and built the McNenny National Fish Hatchery a few miles west. The Spearfish site became a training center for work with fish diets and nutrition, adding a genetics research laboratory to the mix along Sand Creek in Wyoming, while the new McNenny station produced the bulk of the trout.

Spearfish National Fish Hatchery would go through another permutation when something else dried up: funding.

In the 1980s the U.S. Fish and Wildlife Service divested of a number of facilities in the National Fish Hatchery System. McNenny was turned over to the South Dakota Department of Game, Fish, and Parks. The City of Spearfish took over operations of the Spearfish facility and changed its name to honor the hatchery’s first superintendent, D.C. Booth.

In 1989, the past and the present would come to live on the same contour when the U.S. Fish and Wildlife Service established its National Fish & Aquatic Conservation Archives at Spearfish.

Preservation
Today, on the grounds of the D.C. Booth Historic National Fish Hatchery and Archives, Spearfish Creek batters downhill over rounded stones. Its silver music fades as you approach a preserved boat, “U.S. Fisheries 39,” a craft that operated on Yellowstone Lake in the 1920s. A railcar rests near the boat emblazoned with “Bureau of Fisheries.” Inside von Bayer’s hatching house, still in its commanding position, you’ll find a museum with old tools and artwork and photos that tell the fisheries conservation story. The superintendent’s home up the hill is as pleasant to look at as it is entertaining to tour. Appointed with period furniture and accessories – some of it original pieces – you’ll learn how the Booth family lived their lives.

Perhaps the greatest treasures are those most protected – housed in a climate-controlled collection management facility cared for by a professional curator. Some 1.8 million archival items and 14,000 artifacts related to fisheries conservation are preserved here.

A 1919 photograph of a now-extinct yellowfin cutthroat trout from Colorado is particularly moving. It may be the only known image of the fish. It seems appropriate to have a home here in a circularity of experience. Barton Warren Evermann described the yellowfin for science the year before he visited Spearfish, and the image now lives in a place that he deemed suitable to carry on conservation work.

Researchers of history and conservation are encouraged to send their queries to the curator, April_Gregory@fws.gov.

Craig Springer works in the external affairs department of the U.S. Fish and Wildlife Service – Fish and Aquatic Conservation, Southwest Region. You may contact him at craig_springer@fws.gov