Features Restocking
Cryopreservation – a modern tool with many uses… 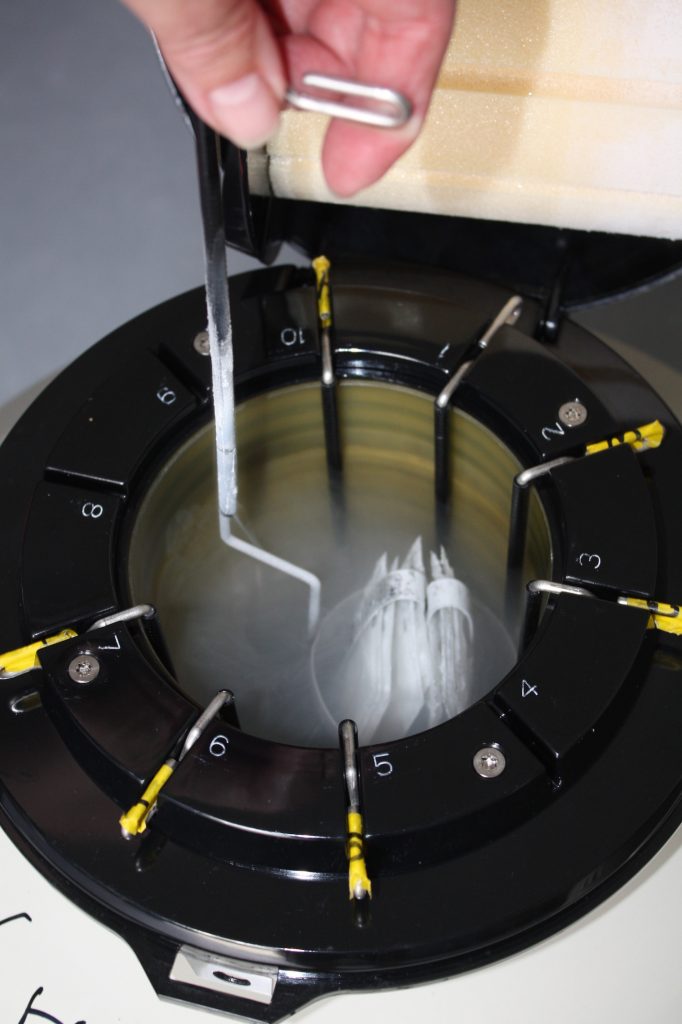 The business of freezing genetic material from fish is not limited to fish farming companies.

A method of slow freezing at a controlled rate, also known as slow programmable freezing (SPF), was a technique well established by the early 1970s. But a newer, flash-freezing process known as “Vitrification” has been proven to give superior post-thaw motility and subsequent survival of embryos (now often as good as when using fresh sperm) compared with the SPF m

ethod. Both techniques end up with gametes being stored in liquid Nitrogen at a temperature of -196°C (-320°F).

When it comes to the use of cryopreservation technologies in fish culture, there have been

significant developments in the freezing of sperm from a variety of species – particularly among fresh water species like salmonids, sturgeon and carp.

But while the cryopreservation of embryos from warm-blooded livestock and humans is conducted routinely, this cannot be said about fish.

A “proof-of-concept” for the freezing and subsequent thawing of an Atlantic cod embryo was demonstrated a few years ago by the Norwegian company Cryogenetics AS. And according to its Managing Director, Jørn Ulheim, the company has since 2011 been working with the technology, taking it from a proof-of-concept to an application model.

“This has been difficult and complex work, but we are making progress and are testing the technology using various types of embryos. There are still a couple of milestones to be reached, but the target of Cryogenetics is to have an industrialized concept ready for Zebrafish within the next year.”

Zebrafish is an important fish that is being used in biomedical research for studies of such issues as cancer and cardiovascular disease in humans. Ulheim also noted that due to the lack of interest in farming of Atlantic cod, further work with this species is no longer one of the company’s priorities.

Cryogenetics AS is currently providing services from their facilities in Canada, Chile, Norway, the UK and USA for the collection, freezing and storage of sperm from the following species:

After successfully developing improved cryo-preservation protocols for the major cold water species, Cryogenetics is now working its way towards selected warm water species. This year work has been done on catfish and cobia in the southern U.S. The company is expecting to provide new tools to improve hatchery output also for these fish types, this as a combination between cryo-preservation and use of fresh milt technologies.

Cryogenetics has also developed a line of Aquaboost products and tools that ensures a consistent concentration of sperm for cryopreservation in order to make in-vitro-fertilization easier and more efficient. And around the world, sperm from many other species have successfully been used to fertilize eggs after having been cryopreserved – sea bass, striped bass, sea bream, groupers and ocean pout being some of them.

The use of cryopreservation as a tool in conservation work is increasingly becoming common practise. In Norway, the Department of Environment started a “Genbank” project for wild salmon in 1986 in order to secure and preserve the genetic material of the country’s salmon stocks.

One of the main drivers behind the project was the realization that many of the country’s salmon-bearing rivers have been affected by an ectoparasite inadvertently brought into Norway from Sweden – the Gyrodactylus salaris parasite. Genetic material from some of these rivers is being moved into the Genbank ahead of parasite eradication programs followed by salmon re-introduction.

The Genbank project works with both live and cryopreserved material. Approximately 2 ml sperm from at least 50 individual fish has been collected from almost 200 rivers and is stored in liquid Nitrogen – each sample enough to fertilize approximately 3,000 eggs.

When it comes to the process of deciding which watersheds to select from (and all fish from one river or a major tributary are considered to be one stock), importance is placed on collecting sperm from fish from different geographic locations and from different biological environments. Stocks that are threatened with extirpation and stocks of special scientific value as well as stocks that have high value for commercial purposes are prioritized. The collection is made over at least two year classes.

In many parts of the world the use of cryopreserved sperm could be a valuable way of securing the genetic material of fish in watersheds that will be exposed to the construction of large industrial projects such as dams, pipelines and other man-made intrusions into the environment.

As cryopreservation has played a significant role in the breeding of terrestrial plants and animals, the technology has presented a long list of benefits and advantages to the artificial propagation of aquatic animals.

In addition, many of the following factors resulting from successful cryopreservation are of importance to concerns around aquatic biodiversity, eco-toxicology and environmental conservation: