Researchers in Scotland explore the lifecycle of the ballan wrasse’s hatchery stage to establish optimal rearing conditions. Could this hold the key to tackling sea lice on salmon farms? 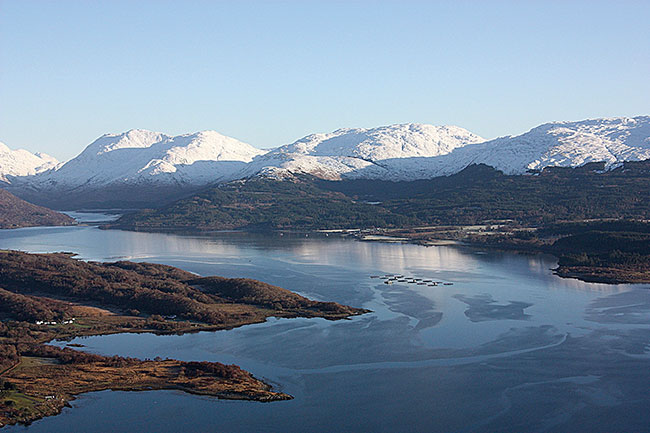 Ballan wrasse have already been found to control sea lice in farmed salmon, but their ability to do so effectively depends on keeping them content in their environment. Now, research at the Institute of Aquaculture in Scotland supported by the Sustainable Aquaculture Innovation Centre (SAIC), cleaner fish producer Otter Ferry Seafish, nutrition firm BioMar, and salmon farmers Scottish Sea Farms and Mowi, are investigating the best conditions in ballan wrasse hatcheries. To do this, nutritional and environmental factors including feed, rearing conditions and how these impact the specie’s growth and welfare, must be taken into consideration. The team hopes that a better understanding of the hatchery stage will help ballan wrasse thrive from the beginning of their lifecycle and make them even more efficient at removing sea lice.

“This particular project is a logical continuation of others that have been conducted over the last 10 years aiming to fully domesticate ballan wrasse,” explained Professor Herve Migaud of the University of Stirling’s Institute of Aquaculture. “Cleaner fish are seen as perhaps the most environmentally-friendly strategy to control sea lice and they are very effective but not yet fully reliable. There is quite a lot of viability. We are currently using fish that are very close to the wild genotype but this is always problematic in aquaculture because their performance is never optimal in a farming environment. We will be moving toward more fish that are adapted to farming conditions and can, therefore, perform better.”

Nutrition research
The hatchery stage is particularly important in marine species and in this case, for effective sea lice removal. In order to establish optimal conditions in the early larval and juvenile stages, feed and environment, and in particular temperature, are key. Studying the nutritional requirements of ballan wrasse in terms of live feed enrichment during the larval stage, necessary nutrients such as minerals, and the use of immunostimulants and functional ingredients to improve disease resistance, could all help ballan wrasse acclimatize and increase their robustness and efficacy in a salmon farm.

“Ballan wrasse are a stomach-less, slow-growing, grazing species,” said Dr. Antonios Chalaris, product manager at BioMar. “Their natural diet is non-piscivorous and primarily consists of hard cell crustaceans and molluscs. They lack acid digestion so we need to have easily digestible feed sources. They also have an omnivorous diet, which gives us the luxury of expanding our raw material basket and the flexibility to add more materials than expected, such as plant-based sources.”

Ballan wrasse diets primarily consist of crustacean meals, but additionally, the final diets need to be high in moisture. “We’ve seen that we can increase growth and feeding efficiency with that by at least 20 per cent. The focus now is on probiotics, minerals and immunostimulants, which need to be tested and adjusted to fit the specific requirements of ballan wrasse,” Chalaris continued. While the basic nutritional requirements and foundations are there, the research team is looking to explore the recipes more in depth.

“I think what is quite complex when it comes to nutrition, is that we are not looking at one recipe but a range of feed formulations throughout the production cycle,” said Migaud. “What is very clear now, is that live feed and enrichments are extremely important and a lot of the problems we see can arise from that early stage. Now we really need to deploy the knowledge we have, to understand fish performance. There is a need for nutritional trials where we can manipulate specific micro-nutrients and that’s what we want to do.” 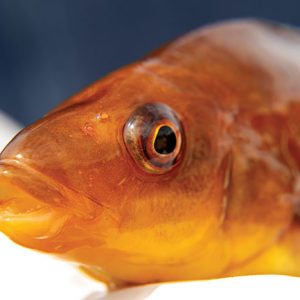 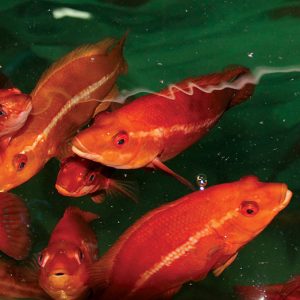 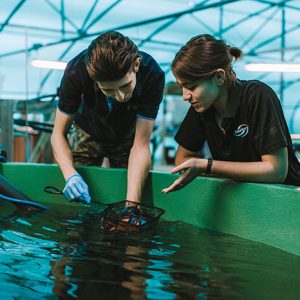 Staff at a hatchery check in with their ballan wrasse stock. 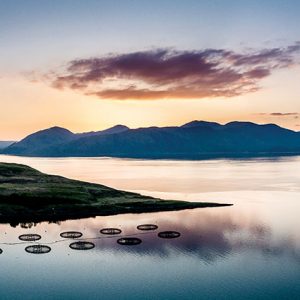 As the best conditions for ballan wrasse, are determined, communicating the results and recommendations across the aquaculture sector and supply chain, will be key in the efforts to tackle sea lice sustainably.

Eyes on the rearing
Further research is also underway to establish an optimal rearing temperature to successfully regulate the growth and metabolism of ballan wrasse, while minimizing stress. In some hatcheries, there are also opportunities for the selective breeding of desired traits such as increased growth rate, temperature tolerance, and disease resistance. Other areas, including tanks, are also important.

“Ballan wrasse are very different to many other species we work with,” said Migaud. “They are very social fish, very aware of the environment and they display some peculiar behavioural traits including sleep-like behaviour at night. We must ensure that the environment, and what we call the furniture in the tank, is optimal. We have artificial kelp in the tanks for the fish to rest in or use as a shelter. This significantly minimizes stress and improves the welfare and comfort of the stocks.”

Work is also being done to ensure that fish welfare and robustness remain optimal in all stages of the hatchery process, as well as the period between departure from the hatcheries to the start of delousing. Other areas being investigated include when and how ballan wrasse are transported to salmon farms, whether there are disease outbreaks on those farms, and whether any husbandry for salmon, such as other sea lice treatments, impacts ballan wrasse performance.

“We are still in the research and development (R&D) phase but we are moving as fast, and the level of progress from ongoing projects is quite impressive,” said Migaud. “I think ballan wrasse have the potential to be a game-changer for sea lice control but I don’t think that they, by themselves, will solve the problem. Sea lice need to be tackled from different directions as they are extremely good at adapting to anything. An integrated pest management strategy is the way forward. Very promising results are also coming in from research on sea lice resistance in salmon.” 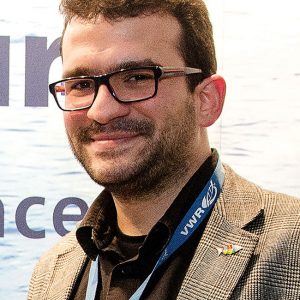 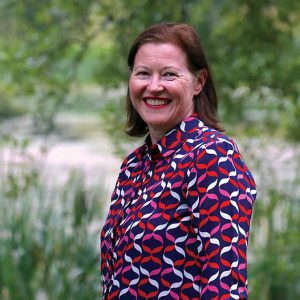 United effort
With a range of ballan wrasse projects underway, hopes are high that the coming years will see a more resilient salmon industry and the full domestication of ballan wrasse. Migaud explained that science and academia-industry collaboration is the basis of the success to come.

“So many things have to be considered, such as feed or the hatchery rearing process; that’s where science is really important,” he said. “Now we can start to pinpoint a host of factors and optimize them, and that can only be done through robust experimental setups.”

Charlaris explained the potential major game-changer is farmed ballan wrasse broodstock, not wild. “We have seen radical changes in the nutritional requirements of ballan wrasse over the past 10 years. We have been working on wild-caught broodstock and BioMar has a suitable diet for them. However, there is still a need for further fine-tuning. But how will the offspring quality of farmed broodstock be? Will we need to boost this even more through nutrition? We don’t know, but my feeling is that we will need more radical changes with these new generations of ballan wrasse. We still have a few years until we reach this stage but it’s going to be a major game-changer.”

“It builds on years of valuable cleaner fish studies and is a prime example of how innovation and collaboration can help solve challenges in new ways, for the benefit of the entire sector. Determining the best conditions for ballan wrasse, and communicating the results and recommendations across the aquaculture sector and supply chain, could lead to significant progress in the collective efforts to tackle sea lice sustainably,” she said.