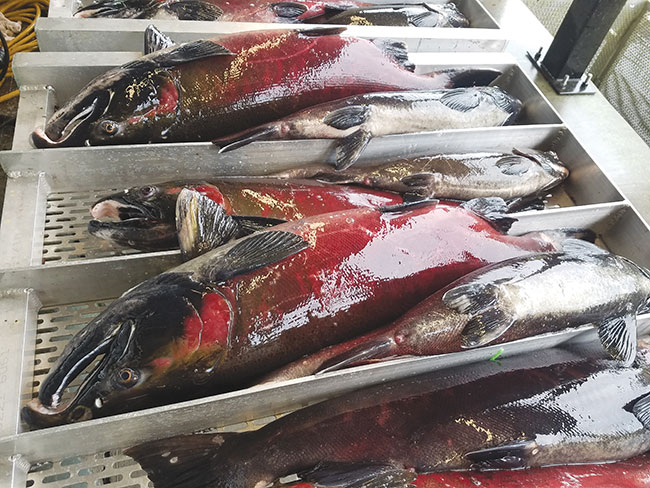 Mates selected so that their genotypes best match productive matings observed in the wild Photo: Michael A. Banks

Animals that are bred and raised in captivity often differ from their natural-origin counterparts. For example, they can have lower reproductive success, perhaps due to a lack of information on the various factors that affect mate choice. This is because in a captive context, ‘who mates with who’ is often mediated by people rather than the animals themselves. One group of species to which this applies is Pacific salmon (Oncorhynchus), which is frequently reared in hatcheries. Although there are many positive aspects to rearing Pacific salmon in this way, their reproductive success could be reduced compared to those that live in their natural environment.

Now, a recent study of the genetic profiles from free-choice breeding among wild and hatchery Coho salmon (Oncorhynchus kisutch) in a natural context, published in the journal, Integrative Organismal Biology, has revealed some key differences in how the two types of fish form mating pairs. Hopes are high that new insight into these differences can inform different mating strategies that may improve the survival of hatchery fish, and lessen their impact on wild fish.

“When hatchery fish return after spending most of their life in the ocean, some of them interface and breed with wild fish in a natural context,” explained Dr. Michael Banks, a fisheries genomics, conservation and behaviour professor in the Department of Fisheries, Wildlife and Conservation Sciences and the Coastal Oregon Marine Experiment Station at Oregon State University’s Hatfield Marine Science Center.

“Most studies show that when this happens, they often don’t have as many offspring as wild fish and therefore present a risk of drawing down the fitness of an already-struggling natural system. This means that many regions need to adopt policy that preclude opportunity for hatchery fish to mate with wild fish, which often reduces hatchery releases. Our goal is to learn how to produce a better hatchery fish that may have similar productivity to wild fish, and one of the things we are looking at is how wild fish choose their mates,” he continued. “We have three essential questions – can we use genomics to learn how most productive wild fish choose mates? Can we then use those lessons to see if we can emulate wild-like mate choice in a hatchery context, and would this increase the fitness of hatchery fish?” 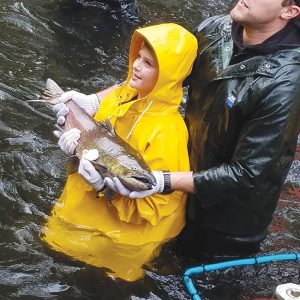 Selecting broodstock and passing the skill across generations. (Photo: Michael A. Banks) 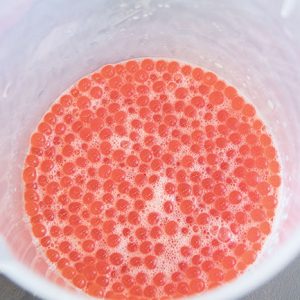 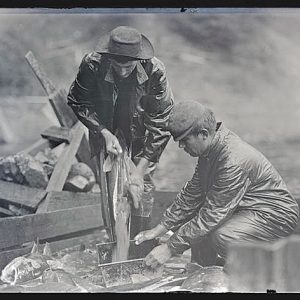 Differences in wild and hatchery mate choices
Using a previously-established pedigree of wild and hatchery Coho salmon from the Umpqua River in southern Oregon, the research team carried out a full genome characterization process called genotyping-by-sequencing (GBS) – cutting the genome into little DNA fragments using enzymes – extracted from the fin-clips of parents engaged in the free-choice breeding context described above. The ends of these DNA fragments were then sequenced to reveal a representation of specific markers spread out across the entire genome for about 800 wild and hatchery fish that had mated with each other. The aim was to identify single-nucleotide polymorphisms, or SNPs, that are associated with variation in mate choice between wild and hatchery fish.

“We looked at more than 15,000 different markers,” said Heather Auld, a post-doctoral research associate at Oregon State University’s Coastal Oregon Marine Experiment Station, and the study’s lead author. “Once we were confident in genotypes of all the fish, we used permutations and other statistical analysis to figure out whether they were mating assortatively, in other words picking mates with similar genotypes to themselves, or disassortatively – following the concept of opposites attract.”

“Although little is known about how genes associated with these markers manifest in Coho salmon, these findings raise an important question: is there a reason why hatchery fish use different traits for their apparent mate choice in the wild or are they just making bad decisions?” said Auld.

A helping hand for hatcheries
Understanding how Coho salmon choose their mates may be key to better emulate natural mating in hatcheries and maintain productivity and conservation goals. The next phase of the work is to test this notion. For three consecutive years, Banks, Auld and their colleagues have been working with hatchery staff to test the potential value of implementing ‘wild-like’ mate choice in hatcheries to increase productivity and lessen the differences of their offspring and thus, their impact on wild fish. Eggs of up to 120 females were divided into two. One half was combined with a randomly chosen male, as is typical for many hatcheries, and the other half combined with a selected male following wild-fish mating patterns, identified in the study.

“We generated a total of up to 240 families, half random bred, the other half selected to best emulate ‘wild-like’ choices,” said Banks. “But the effect of female genetic background is controlled because each of the half-sib families have the same mother. We are very excited about the ‘proof-of-concept’ that will be revealed after analyzing returns through 2025.”

To better understand and identify optimal mating pairs, Auld and Banks said that hatcheries could also look at how the immune system influences breeding. A number of genes could be characterized and used, while fish length, weight, and other traits may also help form optimal mating pairs. It is also possible that hatchery fish make different mate choices to wild fish based on different exposures and selection pressures experienced by their parents, while fish behaviour and social environment could also be significant.

“There has been a lot of work done on female mate choice, while comparatively, male mate choice has been neglected. Traditionally, it was said that males aren’t choosy and will mate with anyone, but this is not the case. How social environment influences mate choice could be another important area for hatcheries to look at,” said Auld.

“Auld’s PhD study observed that some guppy males copy the mate choice of other males,” said Banks. “It’s like a social dimension of mate choice. I don’t know how hatcheries could incorporate this but they could work on observing fish characteristics, such as whether a fish is shy or bolder. What is so fascinating about this subject is how different it is among different species and contexts.”

Going forward
In November 2021, the team sampled first returning jacks from year one of their experiment (jacks are young male salmon that reduce their ocean residence to spawn precociously with females a year or two ahead of their sisters). All Coho returns through 2025 are expected to be from this experiment, said Banks, and genetic samples will continue to be taken and analyzed throughout that period. If ‘wild-like’ spawned hatchery fish have higher productivity and other traits expected of them, the team’s findings could potentially alter how hatchery fish are mated, resulting in fish that are more like wild fish, with less impact on wild fish. Because many hundreds of fish pass through hatcheries on most spawning days that include many processing tasks, adding the need to take fin-clips from each of them is logistically challenging. Thus, work is underway to facilitate, for example by using robotic samplers. Further communication with other hatcheries and those in management and policy is also in the cards.

“Bringing people to the table and sharing our discoveries in ways that have the best outcome is a big priority for us,” said Banks. “Besides necessary scientific steps, there are political and social aspects to consider, in other words convincing people, spreading the word, and getting them to understand our research, shortfalls and benefits. We can promote the success of hatchery fish, but it’s also important to honour that nature is very complex, as are the many different goals among the different hatcheries that are out there. With the best intent, we still have much to learn about multiple strategies that may advance hatchery practice, conserve and protect the natural context that they may be in, but also maximize the outcome of what the hatchery’s intent actually is,” he concluded.

“This work has a lot of potential in captive-reared species and the basic idea behind it can be applied to species other than Coho salmon,” said Auld. “Although our results cannot simply be taken and laterally transferred to all species, the overall framework can, to some extent. I would also say that communication is key to working with hatcheries and the larger community they serve. There is a large social and communication component that needs to happen between folks who love hatchery fish and those who are against them because they think that they are going to be the downfall of wild salmon populations. We need to get people talking so that they understand the different viewpoints, if hatcheries are to remain successful.”