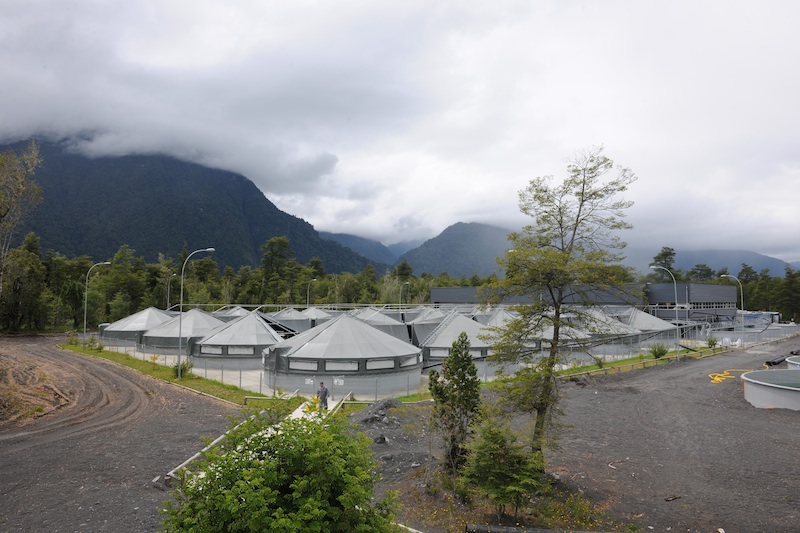 For the last few decades the Chilean aquaculture giant Camanchaca has been producing Atlantic salmon and steelhead trout at two hatcheries located in the Los Lagos region of this South American nation.

Camanchaca was launched in 1965, with a focus on fishing and processing of wild shrimp and Langostino lobster. By 1980, a change in management brought about a diversification strategy expanding into the aquaculture sector. The company, based in Santiago, with facilities across Chile, is now one of the biggest seafood exporters in the country.

“Our capacity is 14 million Atlantic salmon smolt per year, weighing 100 grams each,” freshwater hatchery manager Hugo Cajas told Hatchery International. “This is a first-class facility, and allows us to position ourselves as one of the five biggest exporters of salmon in Chile.”

The company’s primary salmon hatchery is in Petrohue. Elsewhere, Camanchaca’s Rio del Este hatchery focuses on breeders in their last stage before spawning, while its Playa Maqui center specializes in developing juvenile trout. Together, the Rio del la Plata hatchery and the Playa Maqui center have an annual steelhead trout capacity of about five million fish.

Cajas explained that the Atlantic salmon hatchery is a RAS built by the Danish aquaculture technology firm Billund. The trout hatchery, on the other hand, consists of a flow-through facility.

The breeding center for the salmon has about 8,000 breeders, based on the company’s own genetic selection rapid-growth, “Locky” strain.

“The technology we use [at the salmon hatchery] includes an incubation and recirculation system,” Cajas explained. “It is a system with 100% UV treatment of water without biofiltration, allowing us to maintain an optimal environment for the incubation of healthy fish.”

He said that the center includes 128 incubation trays, “with a capacity of 28 million eggs per year in four cycles (7 million eggs per cycle), separated into two separate systems. Each unit has sand filters, de-gasification systems (CO2 removal) and treatment with ultraviolet (UV) 100% of the water used.”

According to the Billund website, the Danish company listed several of the Camanchaca systems it installed in Chile—grading and vaccination facilities, egg and pre-smolt, and testing units. In addition, the RAS salmon hatchery, one of the largest freshwater-well sourced in the region, includes a start-feeding and fry system.

All and all, the hatchery facilities at Camanchaca employ 65 staff, including management, administration and operators, Cajas said.

The fish hatcheries and the wider aquaculture business they support are very important, “since it makes up 60% of sales for the company,” he added.

Sticking with what they know best, having started their salmon and trout operations in the 1980s, Cajas said his company has no current plans to research other species.

“Camanchaca simply cultivates Atlantic salmon and trout species,” he explained. “Our strategy includes a constant increase in the quality of the genetics of our species, and we’ve had a Breeding Program of Atlantic salmon for 11 years, with significant developments in this regard.”

Last year Camanchaca joined a group of five other salmon breeding companies to mutually cooperate to assess egg and smolt quality indexes and smoltification parameters to be used in the Chilean industry.  The goal of the project was to generate an exchange of knowledge so as to minimize the health and production risks involved in the freshwater to saltwater transfer of smolts.

Ed. Note – Camanchaca is named after a unique climatic feature of Chile where cloud banks form over the Atacama Desert along the Pacific coast.